Fifty years ago, Ford and General Motors introduced their first subcompact models to challenge the rising tide of Japanese and European imports. One was underdeveloped and riddled with faults. The other would become an infamous cause célèbre for US safety campaigners.

In the late 1960’s US auto makers were becoming concerned about the growing popularity of small Japanese and European imports. These tended to be basic and unsophisticated, but were also cheap, economical and reliable, particularly when compared to the alternative of a second-hand domestic model. Ford and GM needed to fight back, so set to work developing what would become known as subcompacts.

The Ford Pinto and Chevrolet Vega were launched within a day of each other in September 1970. Conceptually, they were identical: conventionally engineered front-engined RWD cars that would be available in saloon, hatchback and estate versions. The Vega was slightly larger, with a 3” (75mm) longer wheelbase, although rear seat space in both was occasional at best for adult passengers.

The development of the Vega was highly unusual in that it was controlled, not by Chevrolet, but by an independent team of fifty engineers led by Lloyd Reuss, who reported directly to GM President, Ed Cole. Reuss would himself go on to become President of GM in 1990.

There were great ambitions for the Vega. It was a clean sheet design that would major on lightness and efficiency, with a new 2.3 litre four-cylinder engine featuring an aluminium block, cast-iron cylinder head and a belt-driven overhead camshaft. Reuss was set a tight deadline, just 24 months, to develop and launch the new car. The development budget was, however, generous at $200m, the most GM would spend on a new car to date.

John DeLorean, who was appointed Chevrolet General Manager in 1969, inherited what he regarded as a highly unsatisfactory situation where nobody at Chevrolet had any input to or interest in the Vega. In the 1979 book, On a Clear Day You Can See General Motors, DeLorean allegedly revealed that the first prototype driven by Chevrolet engineers literally broke in two at the front bulkhead after just eight miles on the test track. The floor pan had to be reinforced to prevent this happening again.

Not only was the Vega all-new, but a new and highly automated plant to manufacture it was built at Lordstown, Ohio. The automation was designed to increase productivity initially to 70 vehicles an hour, compared to 55 vehicles per hour typically achieved in other GM plants. The Vega had been designed from the outset with automated assembly in mind, so the body structure was simplified to the greatest degree possible.

Despite his misgivings, DeLorean, ever the salesman, described the Vega a month before launch as “…the highest quality product ever built by Chevrolet” in an interview with Motor Trend magazine. The car was launched to a positive reception and was duly named the Motor Trend 1971 Car of the Year. 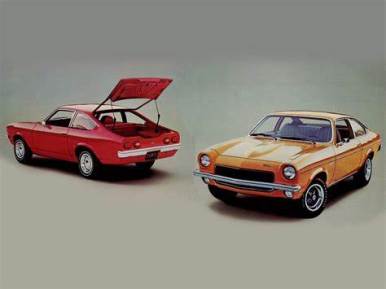 The entry price was $2,090 for the base two-door notchback saloon, which was $240 more than the base Pinto. The three-door hatchback was particularly attractive, with its scaled down Chevrolet Camaro appearance, and would prove to be the most popular variant. One innovation was side impact beams in the doors, unique at that time in a small car. This, and the floor pan reinforcements, partly accounted for the Vega weighing in at 2,190lbs, a substantial 283lbs heavier than the Pinto.

Before long, however, problems caused by the Vega’s unusual and accelerated development began to surface. The engine in particular suffered from excessive vibration, which caused valve stem seals to crack and allow oil to leak into the cylinders, leading to clouds of blue smoke from the exhaust, excessive oil consumption and, occasionally, engine fires. It also overheated to the degree that the aluminium block would warp, writing the engine off. The vibration was so bad that the factory took to gluing the nuts holding the carburettor to the inlet manifold with Loctite, to try and stop them working loose.

Car and Driver magazine, in a retrospective on automotive duds in 2009, said of the Vega: “It was so unreliable that it seemed the only time anyone saw a Vega on the road not puking out oil smoke was when it was being towed.”

There were corrosion problems too. The automated dipping process to prime the bodies was unreliable, and rust regularly appeared on new cars awaiting delivery in dealers’ lots. This was dealt with cosmetically but would soon reappear when the car was in the hands of its proud new owner. One particular area of weakness was the front wings. Thousands were replaced under warranty before full wheel arch liners were added in 1974.

Car and Driver compared a Vega and Pinto on a 15,000-mile long term test in 1971. The Vega, with a full complement of extras (apart from air-conditioning) cost $2,847. It was comfortable, with much more supportive seats than the Pinto, although their non-breathable vinyl upholstery became unpleasantly hot, especially with excessive heat radiating from the transmission tunnel. Ventilation was somewhat better than on the Pinto, but the Vega really needed the optional air-conditioning.

The Vega’s Achilles’ Heel was, of course, the engine. The testers stated bluntly that, from an NVH standpoint, it was “…unfit for passenger car use.” At 2,200rpm in particular, an unpleasant vibration tingled the driver’s toes through the pedals and caused the gear lever to buzz. Around town, the engine’s clatter and noisy exhaust were “…genuinely unpleasant” and the rubbery and obstructive gear change made the car no fun to drive. At highway speeds, wind noise tended to obscure the worst of the engine noise. Fuel economy averaged around 23 mpg (US) but was highly variable depending on driving style, ranging from 16 to 30 mpg (US).

GM worked to try and correct the Vega’s problems and by 1975 was sufficiently confident in the engine’s durability to offer a 50,000-mile warranty. This was achieved in part by lowering the compression ratio and detuning it to accept unleaded fuel, reducing the power output from 90bhp at launch to just 78bhp on the standard engine, and 110bhp to 87bhp on the more powerful optional unit.

GM also tried to improve build quality, while at the same time increasing productivity at the Lordstown plant towards its target of 100 vehicles per hour. This caused tensions with the workforce and accusations of deliberately sloppy workmanship, culminating in a month-long unofficial strike in March 1972 that cost GM $150m. The target was achieved, but initially caused further problems with the Vega’s paint quality.

Over its seven-year lifespan, a total of 2,010,547 Vegas were produced, over half of which were the three-door hatchback variant. Its best year was 1974, when 460,374 cars were produced. That the Vega sold well in spite of its well-publicised problems is a testament to the power of GM marketing and, possibly, low expectations amongst potential buyers.

In Part Two we examine the development and career of the Ford Pinto, a less ambitious but more serviceable design, marred by one major flaw.

46 thoughts on “Subcompact and Substandard (Part One)”