The Spanish word for fire, the Renault Fuego was somewhat unusual in 1980 in that it was in receipt of a name rather than a numeral. The nationalised French carmaker’s numerical system, which had been in place since the ’60s was already showing signs of unravelling, but would take almost another decade before being abandoned with debut of the Clio in 1990. This made the Fuego something of an outlier in the range, a status the car maintains to this day.

To those who recall Renault’s 1980 coupé contender at all, most would probably be minded to dismiss it as something of a damp squib. However it was (for a time at least), both a critical and sales success. Yet it quickly waned, falling prey to changing market requirements and its maker’s shaky finances, the Renault coupé’s flame burnt itself out well before the curtain fell.

In 1975, Robert Opron, a recent refugee from Citroën’s takeover by Peugeot, was appointed Directeur de Style at Renault, bringing with him a concept for an upmarket grand coupé. But while this car wouldn’t be built for almost another decade, meanwhile, Renault’s R15 and 17 coupés, now looking dated against more up to date offerings – especially from Japan and Germany – required replacement.

In a similar manner to its predecessor, the Fuego would utilise the vin ordinaire 1978 R18 saloon as its creative and architectural basis. The 18 was an entirely pragmatic world-car in conception, intended to appeal to the broadest possible market, which probably explains its style, which was criticised – by certain members of the UK press in particular – for its bland appearance.

The Fuego’s exterior is largely attributed to Renault stylist, Michel Jardin, working under Opron’s direct supervision. Whether by intent or by expedience, there were strong similarities between it and the 18. However the Fuego’s nose was lower and more penetrating, and the use of integrated plastic bumpers lent it a more modernist, aggressive mien. The rear was dominated by the curved opening glassback (a style feature which Opron had espoused during his previous stint at Citroën), and large integrated lamp units.

Clean uncluttered flanks aided the car’s 0.34 cd, but one feature in particular would prove divisive. Opron outlined to chroniclers that his intention was originally to have employed a series of ridges along the flanks of the car, finished in painted aluminium, designed to draw heat from both engine bay and passenger compartment without disrupting airflow. However, costs militated against such a treatment and the louvred plastic finisher which was used, he lamented, served no useful purpose whatsoever.

Indeed, reading between the lines of Opron’s statement is a suggestion that perhaps the finished car fell somewhat short of what he had in mind. Renault employed a very different commercial mindset to that of the double chevron, and while it appears he enjoyed a good rapport with Renault CEO, Bernard Hanon, it took Opron some time to reacclimatise to a different set of expectations. 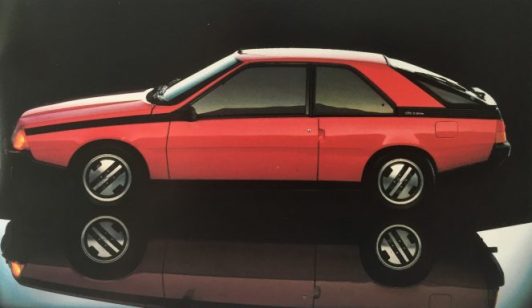 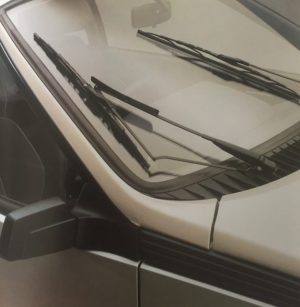 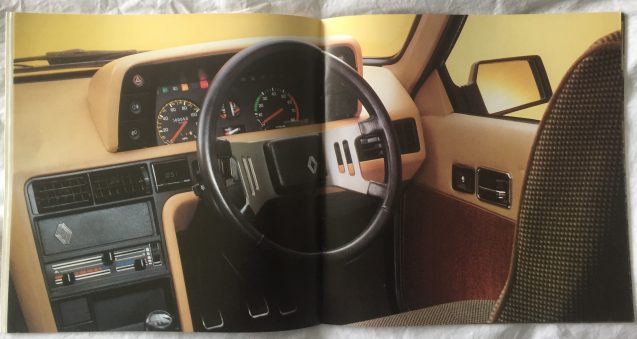 Overall however, the Fuego was (both internally and externally) elegant, modernist, clean-limbed, but apart from the top of the range GTX models on their distinctive graphic alloy wheel designs and low profile Pirelli P6 tyres, the coupé appeared somewhat spindly, unplanted and overbodied. Trim levels followed the usual Renault logic, spanning TL, TS, GTS, TX and haut de gamme, GTX. A notable innovation was the so-called Pantograph wiper arm, which articulated the blade to the furthest edge of the screen. Another (possible first?) was the fitment of a speed-limited ‘get you home‘ spare wheel.

A curious omission at launch however, was a genuine performance model. While it’s unclear as to whether the PRV V6 from the R30 could have been stuffed in, such a power unit would have lent the car a more muscular demeanour and perhaps given some of its multi-cylinder contemporaries something to think about. Six-cylinder engines however would not be forthcoming, since Renault, thanks to their efforts in Formula One, were now wedded to turbocharging.

This did mean that while the Fuego was generally well received, it gained a reputation for being a little on the tepid side, lacking as it did a performance image – with the less charitable of the auto press contingent dismissing it as something of a voiture de coiffeur – a fleeting visual resemblance to its less stylish saloon sibling hardly aiding its cause. Nevertheless, sales proved strong over its first two years on the European market, with those in France and the UK being particularly strong.

1982 saw a federalised version introduced across the US market. Sold by AMC dealers in normally aspirated and turbocharged forms, North American models were fitted with recessed federal-compliant headlamps and larger 5-mph impact absorbing bumpers – and while the visual changes were less egregious than many European transplants, they hardly improved matters. Not that styling would be the Fuego’s problem in the US. While well reviewed by the press, the cars, like most European offerings, simply weren’t sufficiently well made or durable to meet US market expectations. 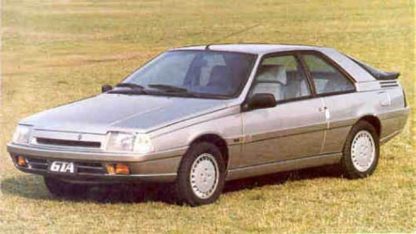 In 1983, the European models received a facelift, with changes to the grille treatment, bumpers and a revised cabin. Technically, the big news was the debut of the Turbo model, which used the same 1565 cc engine as fitted to the 18 Turbo. The previous year a turbocharged diesel version had been added to the range, perhaps the first of its kind. The facelift also brought innovations which would later become ubiquitous. The PLIP central locking system employed a keyfob which sent a signal to a sensor on the car, allowing the doors to be locked remotely. A major selling point at the time, as were the remote radio controls, mounted on a binnacle adjacent to the steering wheel.

Apart from the availability of a 2.2 litre model in both mainland Europe and America, the Fuego fizzled out, victim of falling demand for mid-size coupés from mainstream carmakers and the heyday of the performance B-segment hatchback, which provided more thrills for less outlay – for the customer but especially for the manufacturer. Production ceased at Renault’s Bolougne-Billancourt plant in 1985.

South America however would prove a different story, with Fuego production transferred to Argentina, where the car was sold in heavily revised GTA form (itself believed to be an abortive third series facelift proposal) until 1992.

Ultimately then, the Fuego was a bit of an anomaly, writing cheques it ultimately hadn’t necessarily the firepower to cash. A prime example of a car which lacked that final spark of inspiration that might have ignited the carbuying public’s ardour. In the end, a combination of factors extinguished it, but frankly, there wasn’t much of a conflagration to start with.

36 thoughts on “Fire Without the Spark”