Our Sheffield-based scribe hasn’t tyred of his rubber fixation. Not by some stretch…

The Firestone Tire & Rubber Company was inaugurated on 3rd August 1900 in similar fashion to arch rival, Goodyear. Harvey Samuel Firestone had previous business experience prior to moving from Chicago to the rubber town of Akron, Ohio, a minuscule, hard working and honest workforce (all employees names known), followed by an explosion of fortune and growth. Fierce amidst board and courtroom alike, Harvey S Firestone was a philanthropist at heart – employees were paramount.

Appalled at the shoddy condition of America’s roads in 1919, Firestone invited an army-led Transcontinental Motor Convoy, shod in his firm’s rubber over to his Columbiano based farm to a chicken soup dinner along with an almost military sized advertising budget. “Firestone tyres work better, last longer. Improve the road surface, improve tyre life.” Second in command of the convoy being a youthful Lieutenant-Colonel Eisenhower.

Time and expansion led to foreign lands. With foresight a psychic would kill for, Firestone planted acres of Liberia, Africa with those vital latex producing trees. Begun in 1924, the Liberian plantation was a vital link in the Second World War rubber chain whilst also a fortuitously located port. The Liberian plant continues to this day, even after a brutal fourteen year long civil war and the ever present corporate shenanigans affecting the livelihoods of many Firestone Family Africans. 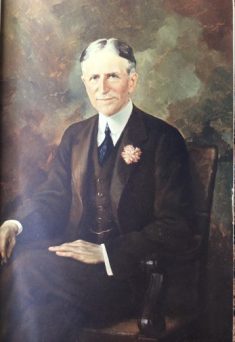 The first Firestone factory to be built outside of North America leads us to London where the world’s raw rubber brokers held sway. Contrasting with the earlier epitaph to the French black circle makers, we head a few miles west of central London. Famously known as The Golden Mile, this Brentford boulevard consisted of successful and in the main, American industrial giants such as Trico for windscreen wipers, Macleans for those pearly whites, Gillette to trim your ‘tasche and the delightfully named Sperry Gyroscope, balanced with highly rewarding architectural structures.

With Harvey keen on competing with the French and English in the now burgeoning European tyre market, the factory was designed in a mere three weeks, and completed in eighteen by Wallis Gilbert & Partners. WGP also built the Wrigley’s chewing gum factory in Wembley and while maintaining a vehicular theme, with the Feltham based Champion Spark Plug.

The Firestone factory was built on a twenty six acre former orchard, the whole building emulating an Egyptian temple. Harvey popped over the pond to open the Brentford facility in 1929, making its first car tyre. The factory also kept pace with the still-current bicycle and growing motorcycle range of rubber as well. Within twelve months, expansion of the building was required. With excellent transportation from road, (The Great Western), supported by rail and canal links, and later with easy air access at Heathrow, soon many a British built bolide was shod in ‘Yankee rubber’.

Peering though the dark clouds of the past to conflict once more, the factory became an obvious enemy target. In the November blitz of 1940, bombs fell close but caused no damage. The increasingly female-dominant workforce sheltered below the factory. Just before Christmas, several tyre machines were damaged by the Luftwaffe, but production was restored within the week. Even the flying V-bombs towards the war’s end made little impact on tyre production.

Whereas Michelin’s London defined a Headquarter building, Firestone Brentford was nothing but les usine but at least a well conceived and designed one. Reports of conditions inside the plant range from “beautifully light, airy and well kept” to “Hell hole.” Few could argue the production of tyres being an altogether clean process but our gaze falls now upon the building itself.

Noted architectural critic and author, Ian Nairn makes no comment on the factory, merely classing Brentford as “traffic laden”. Perhaps having more pressing pub engagements to attend to, his omission of this art-deco delight nevertheless is nothing short of criminal. Classed as being part of the Jazz Age, for a factory to not only produce in-demand goods but within a building quite as beautiful as this, is astounding.

The end of this story being equally so. Safety concerns over Harvey’s tyres had been brought into question, mixed with internal politics from Akron. By August 1979, employees were told the factory would close and in the following February the 1,500 workers made tyres no more. Around one third of these were re-employed by London Transport.

Silent for six months, both the local council and the Department for the Environment were keen to utilise the building as long as it was listed for preservation and the frontispiece retained. The bulldozers moved in on Sunday 24th August: the listing plan being due on the 26th, after the Bank Holiday. The ensuing political furore may have ruffled feathers but ultimately the major loss was the building itself. Nowadays, the gates are all that remain, the subsequent replacement building home to SKY Television and electronics retailer, PC World. (Others are available). 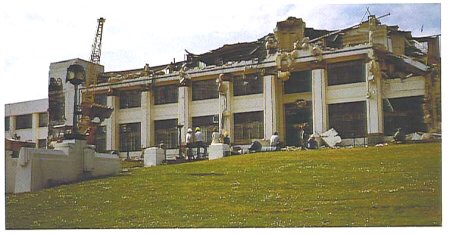 Harvey Firestone didn’t survive to see the factories heyday, dying peacefully in his sleep aged 69 at home in bed in 1938.