With the Javelin’s revolutionary credentials established at an early stage of development, evolution towards running prototypes and production reality gathered pace in a harmonious and efficient manner.

Possibly the most successful element of the Javelin’s design is its suspension and steering. At the front, double wishbones are employed in conjunction with longitudinal torsion bars. Telescopic shock absorbers are used, and the wheels are steered through a sector and pinion mechanism, located behind the engine which is mounted just forward of the front axle line.

At the rear the live axle is located by four fully trailing links and a Panhard Rod. Springing is again by torsion bars, this time in a transverse arrangement. Telescopic shock absorbers are mounted at a 45 degree angle to reduce intrusion into the interior space.

Drum brakes apart, the Javelin’s chassis would have been considered sophisticated in 1998. Fifty years before, in the world in which it would make its debut, beam front axles, friction dampers, leaf springs, and vague steering boxes were the commonplace currency in the British motor industry. It is in the area of suspension that Palmer is at his most principled, most fundamentally in his advocacy of torsion bars over coil springs and leaf springs. 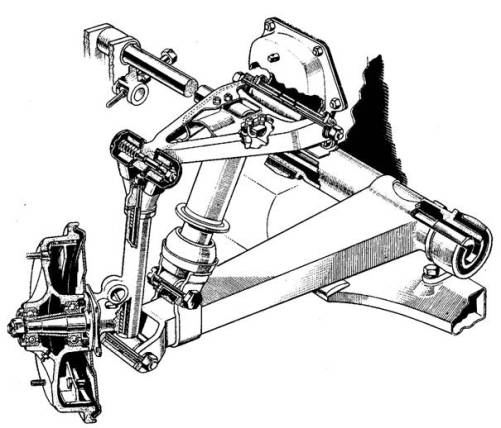 The Javelin’s principal dimensions were set at an early stage of the project.

The numbers are a reminder that the longer-lower-wider era was some time away, at least in Europe, and that car-buying decisions were still the province of middle-aged, hat-wearing men.

Palmer’s styling was literate and eclectic, inspired by some of the best designs of the late pre-WW2 period but not a copy of anything particular. John Tjaarda’s 1933 “Briggs Dream Car” was an acknowledged influence, along with the 1936 Lincoln-Zephyr it inspired.

The much smaller 1936 Steyr 50 and 55 were noted as being influential, with their forward-located flat-four engines, but the Lancia Aprilia was not. Perhaps Palmer was being mischievous in this particular matter.

The possible Aprilia inspiration was rumbled by Bill Boddy in Motor Sport. The identical engine capacity – 1486cc is mere coincidence. The Lancia’s cylinders were ‘squarer’, at 74.6 × 85 mm. What both cars had in common was light weight, a semblance of aerodynamic design, an unconventional engine configuration, and a sophisticated chassis, to use the term in its broadest sense. Much later in his career Palmer admitted that he was familiar with the Lancia Aprilia as in the pre-Javelin days as he had “helped a friend to strip one down to see how it worked”.

The development of the engine, although far from straightforward, proceeded rationally. In 1936 Jowett had put their first flat-four cars on sale, but at the same time were dipping a toe in the more conventional waters of in-line four production.

For the post-war cars, Jowett chief engineer Steve Poole favoured an in-line four, but was sufficiently impressed by Palmer’s ideas, or possibly so close to retirement, that the Colonial Engineer was given a free hand while Poole updated the mechanicals of the staple Bradford van for the post-war world. A V4 was briefly considered, but instead a flat four configuration was chosen as much for suitably as for continuance of tradition.

The first experimental engines followed the pre-war Jowett flat-fours in having one piece cast-iron cylinder blocks and two-bearing crankshafts, but with overhead, rather than side valves. Palmer led the decision to add a centre main bearing and change the block material to aluminium. Around this time it was sensibly decided to relocate the spark plugs from the underside to the top side of the engine.

Early prototype engines had a capacity of 1184cc, with a 1.5 litre capacity envisaged for export markets. The larger engined prototypes suffered from unacceptable vibration and harshness, addressed by adoption of a more rigid and substantial vertically split cylinder block in place of the previous one piece bottom end.

The cylinder block was an all alloy split construction, to be gravity die-cast by Renfrew Foundries in their factory south west of Glasgow, although the first 2000 blocks were sand-cast. The cast-iron cylinder heads had in-line overhead valves operated through long pushrods by a top-mounted centrally located camshaft. Palmer specified hydraulic ‘zero-lash’ tappets to mitigate the effect of the long rods’ flexibility on the valve gear’s operation.

(As a digression, this same consideration may have led to Antonio Fessia’s adoption of one camshaft per bank, but still with pushrods, for the Lancia Flavia’s flat four)

The production Javelin’s 72.5mm x 90mm bore x stroke dimensions were daringly close to square by the standards of British pre-WWII engine designs, with export acceptability very much in mind. Palmer would not have anticipated the 1948 introduction of the flat-rate annual car tax in the UK. The preceding ‘RAC horsepower’ system was effectively a tax on cylinder bore, resulting in very undersquare engines.

To avoid long inlet tracts, each bank of cylinders has its own Zenith carburettor. The engine drove a live rear axle through a four speed gearbox with synchromesh on second, third, and fourth gears, supplied by Henry Meadows of Wolverhampton.

Should we be surprised that front wheel drive was not considered for the Javelin? Palmer would have experienced Calcott Reilly’s Citroën Light 15, and also mentions in his autobiography working on projects with John Morris, the eccentric and brilliant chief engineer of the SU Carburettor company, who also owned a Citroën Traction Avant and championed it vigorously, particularly to his Morris Motors colleague A A C Issigonis. The British motor industry was more tentative about mass production of front-drive vehicles than were Citröen and DKW, although BSA and Alvis had produced front driven cars in the late 1920s.

However, in the era of the Javelin’s development, nobody had yet found a cost-effective method of mass-producing constant-velocity joints. To an engineer of Palmer’s rigour, the use of ordinary universal joints, with the problems of uneven transfer of power when steering lock was applied would have been anathema. It is also recorded in his autobiography that he believed that front wheel drive was well suited to small, inexpensive cars, but was too compromised for sporting or luxury cars, whose drivers would favour the orthodoxy of one pair of wheels driving, and the other pair steering.

The Steyr-influenced packaging of the Javelin, established at an early stage of development brought some of the advantages of front wheel drive without the mechanical exigencies. The short flat-four’s location ahead of the front axle line assisted low-speed traction and directional stability, and the cab-forward packaging provided a passenger compartment length greater than many far larger cars.

With a small, closely located design team, a clear objective, and supportive management the new Jowett’s development progressed rapidly and coherently, and in August 1944, 32 months after Gerald Palmer’s appointment, the first hand-built prototype was registered for the road, with a further six to follow shortly after for use in a rigorous proving regime.