Forty years since the launch of the Rolls-Royce Silver Spirit and its siblings; time to reassess the marque’s least loved car.

The late 1970’s was a challenging time for Rolls-Royce Motors. The company had been floated off in 1973 at the insistence of the British Government which, two years earlier, had rescued its parent company, the eponymous aero engine manufacturer, from bankruptcy and wanted it now to focus solely on its core business.

Rolls-Royce Motors was to all intents and purposes a one-model company. The Silver Shadow, in standard and long wheelbase forms, was the mainstay of its range. It had been launched in 1965 and was the company’s best-selling model ever. It was the first Rolls-Royce to feature unitary construction and this largely killed off the trade in bespoke-bodied coachbuilt versions that companies such as Hooper and Mulliner had previously offered. There was a badge-engineered Bentley variant of the Silver Shadow, dubbed T Series, but sales were tiny and inconsequential.

The Silver Shadow was heavily updated in 1977 when it gained new bumpers similar to the energy-absorbing items fitted to US versions, albeit rigidly mounted. It was renamed Silver Shadow II in SWB and Silver Wraith II in LWB form. To the casual observer, however, it remained the same car launched twelve years earlier and its relative ubiquity was starting to undermine the exclusivity potential buyers associated with the marque. Early examples were falling into the hands of used car dealers and scrap metal merchants or, even worse, being sprayed white to service the wedding hire trade.

A new car was needed but resources were very limited, so a plan was devised to rebody the Silver Shadow in a more contemporary style. The designer of the so-called SZ generation model was Fritz Feller, an engineer who was Austrian born but British by naturalisation. Feller produced a design that was undoubtedly crisp, modern and assertive, and much more imposing than the Silver Shadow, albeit without the latter’s delicacy of detail. Still, it was bang on the money for the decade to come, when more was more, and greed was good.

The Silver Spirit and Spur continued with few changes for almost a decade before the Series II models were launched at the Frankfurt Motor show in 1989. The revised cars featured automatic ride control, which was a system of continuously adjustable shock absorbers, ABS and updated Bosch fuel injection. A GM supplied four-speed automatic transmission finally arrived in late 1991.

Series III models arrived in 1994, featuring minor cosmetic tweaks and engine upgrades. A turbocharged version, dubbed Flying Spur, was launched in the same year, as was the Silver Dawn, a US market special edition of the Silver Spur that introduced a 2” (50mm) shallower radiator grille, a smaller Spirit of Ecstasy mascot, closer fitting wraparound bumpers and a new sail panel carrying the repositioned door mirror in place of the deleted front quarter light. These modifications, along with the turbocharger, would be standardised across the range a year later with the launch of the Series IV models.

That pretty much concluded the substantive development of the SZ series Rolls-Royce models, which continued unchanged until they were discontinued in 1998. By that time, the rectilinear style that was fashionable at launch looked rather unsophisticated and certainly outdated. Tellingly, when designing the Silver Seraph successor to the Spirit, Rolls Royce looked back to the Silver Shadow for inspiration. 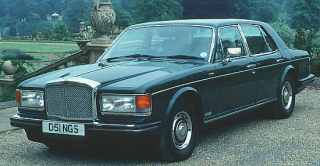 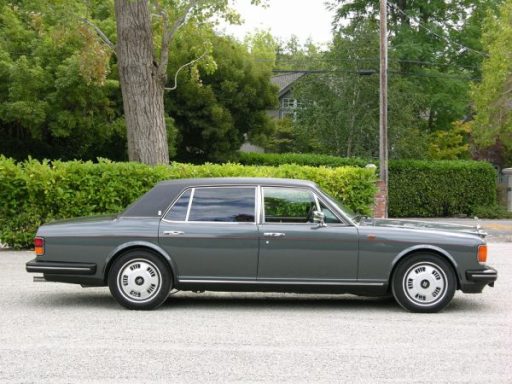 Arguably, the most important role played by the SZ generation model was the revival of the moribund Bentley marque. The 1980 Mulsanne was, initially, no more than a badge-engineered version of the Silver Spirit. Two years later, however, a turbocharged version was launched with a 50% increase in power over the standard car. Rolls-Royce versions would not get the turbocharger for over a decade so, suddenly, the Bentley had a real advantage to promote over its in-house rival.

At the other end of the scale, an entry-level model, dubbed the Eight, was launched in 1984 with a sub-£50k price, some £6k cheaper than the Mulsanne. Further changes would be introduced to distinguish the Bentley models including alloy wheels, body-coloured grille surrounds and slats, mesh grille inserts, and twin round headlamps instead of the original large rectangular units. The latter, together with the more rounded grille, gave the Bentley versions a quite different and more dynamic character compared with the rather inert looking Rolls-Royce models.

The car that really cemented Bentley’s renaissance was, however, the 1985 Turbo R, which replaced the standard Turbo model. The ‘R’ stood for roadholding and the new model had retuned suspension settings and rode on wider alloy wheels, the first Bentley to have these fitted as standard. The improvement in the car’s handling was transformational: it was finally a super-sports saloon worthy of the Bentley name and heritage. Performance was given a further boost with the addition of fuel injection in 1987.

With the Turbo R as its ‘halo’ model, Bentley’s revival continued. Moreover, the Bentley aged better and looked far less dated by the end of its production run than the more rectilinear Silver Spirit.

The next time you see a down-at-heel and unloved Silver Spirit, and there are plenty around, think about the pivotal role it played in rescuing Bentley from oblivion, for good or ill of course depending on your opinion of the Volkswagen-era models. Will the Silver Spirit ever enjoy the renaissance that has seen the values of good (and increasingly rare) Silver Shadows rise in recent years? Time will tell, but like other 1980’s trends, fashions, attitudes and social mores, perhaps it is best left in the past.