When is a Volkswagen not a Volkswagen? When it’s an NSU. The K70’s fate forms a salutary tale.

There is an argument to be made that the Volkswagen motor company has thrived upon existential crises. Certainly they have experienced no shortage of them over their lengthy and mostly successful history. Having survived and prospered in the wake of the first of these in 1945, by the latter years of the 1960s, the Wolfsburg carmaker once again was faced with a serious reversal of fortune, with demand for the emblematic Beetle faltering, and little clear idea of how to move forward in its wake.

Yet this late in the decade, Volkswagen management appeared oblivious to the technological changes taking place across the wider industry, especially in the European market, where front-mounted engines were now very much the norm, and front-wheel-drive was in the ascendancy amongst more progressive carmakers.

One of these, previously wedded to the rear-engined layout, was NSU Motorenwerke AG, whose compact Prinz-series had proved a notable rival to the Beetle in Germany, if not elsewhere. The success of the smaller car emboldened NSU’s management to expand ambitiously. Having previously cleaved to what it knew best from its days as a motorcycle specialist, the company now embraced the very latest in technology, being at the vanguard of what was then regarded as the powertrain of the future – developing a version Felix Wankel’s rotary engine, which made its debut in the beautifully realised, if ill-fated RO80 model of 1967.

The costs of getting RO80 into production, coupled with the development of the rotary engine were to be balanced by the royalties NSU were set to derive from major carmakers queueing to get a piece of the Wankel action. Those who didn’t want to do so, either developed their own, (Mazda, Mercedes, GM), entered into a collaborative alliance, (Citroën/Comotor), or attempted to buy into it, (Fiat). 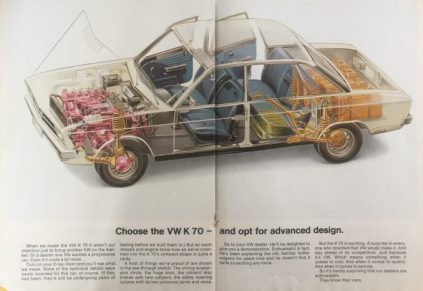 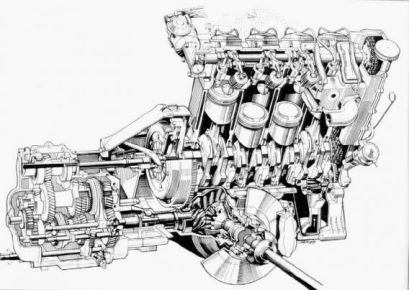 Further to the flagship RO80 was its (slightly) smaller brother, dubbed K70 by dint of its reciprocating piston (kolben) engine. This model would sit smack within the mid-size saloon market, where the bulk of the volume could be gained. Designed along similar (if less aerodynamic) lines to that of its larger sibling under the direct supervision of Claus Luthe, the K70’s lines were crisp and modernist, if perhaps a little on the sheer side. (An estate model was also developed but never produced).

Technically, the K70 resembled its larger sibling in layout and chassis design, both designed under Ewald Praxl’s supervision. Struts and lower wishbones at the front, with what VW called a trailing wishbone axle aft. The front disc brakes were mounted inboard. The 1600 cc overhead camshaft engine was derived from the Prinz 1200 cc unit, and was offered in two outputs – 88 bhp, or 105 bhp (SAE). The engine was mounted well forward over the axle line, canted to the right, with the differential mounted directly beneath, and the four-speed manual gearbox in line behind.

With development complete, the K70 was on the verge of being introduced by NSU in March 1969. But behind the scenes, matters were unravelling. Pummelled by the huge warranty costs associated with the rotary engine’s teething troubles, and those associated with introducing two all-new models in quick succession, NSU fell victim to a potentially ruinous cashflow crisis. At this point Volkswagen stepped in, sensing an opportunity, not only to get hold of Wankel technology on the cheap, but to gain valuable technical know-how from NSU’s engineers, not to mention production capacity from the Neckarsalum facility.

Allegedly pulled abruptly on the eve of that year’s Geneva press day, the K70 vanished without trace while VW’s management pondered its fate. Complicating matters was the fact that Wolfsburg had recently introduced their own mid-sized offering with the rear-engined 411 model, not to mention the first-generation Audi 100, both of which were to a greater or lesser extent, direct rivals for the K70.

Volkswagen’s supervisory board merged NSU into Auto Union, creating Audi-NSU, and positioning it as the group’s technology leader, but as the business case for the Wankel began to evaporate amid protracted technical and in-service issues, coupled with the coup de grâce of the 1973 oil shock, the case for NSU in any shape or form would be irretrievably lost.

Finally, it was decided to productionise K70 in September 1970 – the costs of axing it entirely most likely being prohibitive. Lightly restyled, it was therefore announced as perhaps the most advanced car to bear the Volkswagen name since its inception. “A surprise to everyone who doubted that VW would make it“, the carmaker rather disingenuously proclaimed in the sales material. Well received by the auto press, it achieved second place in that year’s Car of the Year contest, behind Citroën’s winning GS.

Volkswagen described the car as being “well ahead of its competitors“, and while that may or may not necessarily be an accurate reading, when it came to VW’s own 411 series, it most conclusively was. The contrast between the two cars is striking. The 411 represented Volkswagen’s hidebound approach to product strategy; their belief that an enlarged version of the engineering principles which underpinned the highly successful Beetle would suffice into the 1970s – an approach which echoed that of BMC, albeit in reverse.

Pitched against one another, the 411 gained a headstart in sales terms, meaning the K70, a car which required some explanation to traditional VW customers, (if not anyone else) such was its visual and technical novelty, struggled; a matter not aided by Volkswagen’s own lukewarm promotion of the NSU-developed orphan.

In essence a fine, well rounded and capable car, the K70 however wasn’t perfect. Hampered by poor aerodynamics (a consequence of its compact but tall power unit – ironic given the RO80’s low bonnet line) and therefore a relatively heavy thirst for fuel, the VW-NSU, despite its obvious appeal, appeared anomalous within Volkswagen’s early ’70s car range – one which was otherwise dominated by dated, rear-engined, air-cooled offerings.

Along the banks of the Mittelandkanal however, frantic behind-the-scenes efforts to replace the traditional designs were taking place, with both rear and mid-engined fully-engineered prototypes being evaluated. As profits plummeted amid the European and US market’s rejection of the now hopelessly outclassed Beetle, desperate measures were enacted by newly appointed CEO, Rudolf Leiding, who immediately abandoned all attempts at a rear-engined approach.

Audi has been widely credited with the new generation of compact models which underpinned Volkswagen’s post-1974 revival, but there is a train of thought that it was NSU who was responsible for the basic designs for both Audi 50, (nee Polo) and Golf – both of which are said to have been on the drawing boards prior to the carmaker’s 1969 collapse. If true, it could be said that the takeover of NSU was perhaps the most astute (or fortuitous) act Volkswagen ever undertook.

The K70 was modified for 1973, gaining revised frontal bodywork, a larger 1800 cc engine, and trim details. Sales remained sluggish, largely owing to VW’s own ambivalence, and the advent the same year of the Audi 80-derived Passat model, a car which didn’t suffer from a not invented here stigma. The K70’s future was already sealed by then, and production ceased in 1975, with only around 200,000 built, alongside VW’s 411 at the Salzgitter facility. The RO80 struggled on until 1977, but it would not be until 1985 that the NSU name was excised entirely from Audi AG.

Mergers and acquisitions always incur some collateral damage, but in NSU’s case, it does appear they suffered a worse fate than most. Not only that, but with Volkswagen benefitting to a degree which could only be described as undeserving, a truly promising, highly innovative and commercially brave carmaker was snuffed out. History not only favours, but is frequently written by the winners. In this case however, VW deserves little honour. Both K70, and NSU itself deserved a better fate.