The Artistry of the 1920s has been widely and lovingly depicted, but colour has been more notable by its absence. Although not entirely.

The human mind sometimes works in mysterious ways. Because until relatively recently the fact that photography and film originating from the late 19th and early 20th century was black and white, subconsciously the idea that the world presented in those pictures was one bereft of colour often took hold in our brains, even though we of course knew better in our hearts.

The rediscovery of the amazing body of work by French philanthropist Albert Kahn and his colour photographs using experimental autochrome plates – the oldest ones dating back to 1909 – has done a lot to correct this view, as has the recent impressive film production about world war 1 by Peter Jackson, They shall not grow old.

In printed publicity material, until roughly 1930 the presentations were also almost invariably black and white, sometimes enlivened by coloured borders and embellishments in the layout. But as in photography and film, there were exceptions – today’s subject being one of those.

Looking at the cover, at first one might think it to be a catalogue for a paint manufacturer, albeit an unusually luxurious one. The title “Color creations from nature’s studios” likewise offers little clue to the fact that this is a very special – and rare – Cadillac brochure published to promote some of the earliest works of GM’s Art and Color section headed by Harley Earl.

Earl had impressed GM President Alfred P. Sloan so much with his 1927 LaSalle design that he ordered the creation of the Art and Color section (later to be renamed GM Styling), making the 34-year old Earl its first director.

Harley Earl would create a revolution in the automotive world by making appearance and colour at least as important (he himself might say more important) as the technical engineering merits of a car. In order to promote GM’s new division and its works across the country, in 1928 a tour was organised in which a selection of special Cadillacs and LaSalles were put on display in luxurious hotels in America’s major cities. This brochure was printed as a catalogue of these vehicles created by Art and Color. 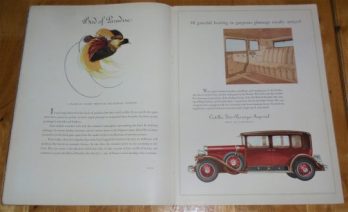 It is a large item, measuring 10 by 13 inches with stiff, almost book-like covers doing justice to its elevated status. There are a total of 40 pages. On each spread of two pages a colour or colour pattern from nature is shown and discussed, while on the opposite page a Cadillac or LaSalle utilising the same colour scheme as an inspiration both outside and inside is presented.
The bird of paradise, the angel fish, curite, rose coral, the grand canyon and the orchid are among the examples from the living world  that inspired a unique, specially created car.

An excerpt from the foreword illustrates the train of thought leading to the creation of these cars:

“Nature, master artist, does not draw lines. She works with masses of color. It is the one skill she never relinquishes, the one that never fails her. Forms crumble. Motion comes finally to rest. Sound sinks to silence. Color alone abides. It may fade- it does not vanish.

Here in the gay plumage of a bird, there in a gorgeous undersea fish; now in a rose resplendent in June sunlight, and again in the lavender shadows on January snows; in the fragile splendor of an afternoon butterfly and in the adamantine heart of a gem buried deep in the core of the earth – everywhere and always, nature hangs her earth with rich tapestries and veins its rocky bastions with vivid hues. It is the final, the glorifying touch of her handiwork. Only when the mechanical structure is perfected does she take up her palette. After the seed the flower; after the larva the butterfly.“ 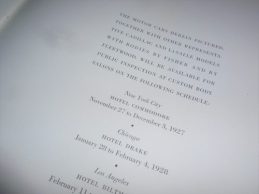 Considering the preponderance of cars in dark, drab colours plying the streets in those days, these vivid creations by GM’s Art and Color must have been quite a sight. Unfortunately, none of these twelve special cars is believed to have survived. Harley Earl would go on to add colour and styling to the automotive landscape for the next three decades – making GM the undisputed leader in this field in the process.

Unlike Mother Nature, Earl would eventually be confronted with the fact that his ideas were getting out of touch with the reality of  real-life practicality and the public’s taste. Nevertheless his legacy was important and an indispensable pillar upon which the American car industry built its image for most of the 20th century.

If you want to know more about Albert Kahns pioneering colour photography project, I heartily recommend the beautiful book, The wonderful world of Albert Kahn by David Okuefuna.

13 thoughts on “Earl’s Take On Nature”