Designer, Tom Tjaarda took two very different bites at the Lancia Flaminia during the 196os. Only one however is truly memorable.

During the Autumn of 1969, carrozzeria Ghia debuted the Marica concept at the Turin motor show, a styling study based upon the platform of the Lancia Flaminia, a car which had already ceased production. Not only that, but its maker had also gone bankrupt and was desperately seeking a benefactor.

Enter Alejandro de Tomaso, a phrase which would be uttered with increasing regularity within the Italian motor industry over the coming decade or so. Having purchased carrozzeria Ghia in 1967, he is alleged to have sanctioned the Marica study as a means of assisting Lancia’s bid to find a buyer – a statement which sounds suspiciously altruistic for such an automotive opportunist as he. But we are perhaps getting a little ahead of ourselves. Allow me to recap.

In accordance with marque tradition, Lancia built the unitary hulled Flaminia platform in a number of wheelbase lengths to facilitate not only the Pininfarina-bodied four-seater Coupé, but the carrozzeria Touring bodied coupé and convertible, not to mention the Zagato-bodied Sport and Supersport models.

The Marica was built on the same 252 cm short-chassis wheelbase as that of the Touring-bodied models (one of only two non-production design studies to do so), ironically, both styled by the same hand but for rival coachbuilders. This being former Pininfarina stylist, Tom Tjaarda, the Marica being the second Flaminia-based proposal from the talented American expatriate’s pen. The previous concept on this chassis first saw the light of day six years earlier, during Tjaarda’s fruitful stint at Corso Trapani.

Pininfarina’s links to Lancia were lengthy and deep, the carmaker allegedly having assisted Battista in setting up his coachbuilding business in 1930. Having been responsible for the shapes of some of the most emotive car designs to have emerged from Borgo San Paulo, the relationship between carmaker and carrozzeria appeared for a time to be virtually seamless.

But nothing could be taken for granted. For Pininfarina, as with all their their coachbuilding contemporaries, it was always about the next commission, ideally one which would entail assembly taking place at their own facility. Pininfarina was already building the production Flaminia Coupé, a car which sold in greater numbers than its berlina equivalent. Based closely upon the 1956 Florida II concept, it was a refined two-door of considerable elegance, dignity and bearing, but not perhaps what the more raffish GT customer was seeking.

With this customer more in mind, the 3C 2.8 Flaminia Coupé Speciale made its debut at the 1963 Turin motor show, Tjaarda having synthesised in-house elements previously seen; the nose treatment being highly reminiscent of the 1961 Flavia Coupé, while the canopy reflected that of 1962’s Alfa Romeo 2600 Speciale study, 1963’s Ferrari 330 GT 2+2, and 1964’s Mercedes 230 SL concept (all Tjaarda’s work at Pininfarina), while the rear treatment with its highly distinctive and at the time futuristic, flush trapezoidal tail lamps developed a style which would latterly become a carrozzeria trademark.

Yet for something of an amalgam, the result was supremely well-judged, successfully bridging dinner suit and sports jacket. Originally painted white, it was shown again the following year, now painted metallic sand. After this, on Battista Pininfarina’s behest, the car was again refinished (silver) and fitted with functioning tail lamps (the originals were purely decorative), sourced from a Flavia Coupé.

Replacing the Florida II concept as Battista’s daily driver, the 2.8 Speciale was used extensively by the coachbuilder, encompassing skiing trips to the Dolomites and competing in concours d’elegance, winning at both Alassio and Cortina d’Ampezzo. Used daily until his death in 1966, the car was retained by the family until 1972. It is now in the hands of a wealthy Italian collector who has meticulously returned it to its exact 1963 Turin show specification.

Having departed Corso Trapani for good in 1965, Tjaarda, in between freelancing for Giorgetto Giugiaro in his fledgling Ital Styling venture (later to become Ital Design), succeeded Giugiaro as lead stylist at carrozzeria Ghia in 1968. Ghia had enjoyed something of a resurgence following some notable work from its previous styling chief, and under Tjaarda’s guidance, would be considered sufficiently valuable an entity for Ford to purchase in 1970.

The Marica study, (named it is said after an ancient Roman nymph) was a close coupled coupé, melding the insouciance of the 2.8 Speciale with the sobriety of the production coupé, but while coming dangerously close to hitting the target, somehow imperceptibly missed.

The problem as I see it is one of increments, of details that are just ever so slightly off. Overhangs are a little excessive for the wheelbase length, throwing off the proportions. The nose treatment seems over-fussy, the truncated Lancia shield grille failing to harmonise with the more horizontal surroundings. In addition, the attempt to reprise the grille effect at the extremities simply looks clumsy.

A pronounced swage line runs along the car’s flanks, ceasing in an upward flourish at the base of the C-pillar – an effect which doesn’t read all that well, especially given the pinched body crease which runs the length of the car, just below. The falling tail also fails to harmonise with the more linear canopy and stout C-pillar, lending the silhouette a slightly broken backed appearance from some angles, while at the rear, despite attempts to perhaps refer to the wingtop castellations of the Fulvia Coupé, the tail appears bland and featureless.

A further issue and one which in fairness wasn’t apparent in 1969 is that of familiarity. But hardly surprising nonetheless, given that the 1972 De Tomaso Longchamps was also a Tom Tjaarda design, and clearly directly influenced by the Marcia. The Frua bodied Maserati Kyalami was also derived from the Longchamps, so again the correlation is clear. Furthermore and more conclusively, the Marica prefigured the (stronger) theme adopted by Paolo Martin for Pininfarina’s seminal 1971 Fiat 130 Coupé – the latter being most definitively a design for the ages and the most Lancia non-Lancia of all. 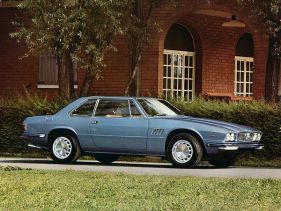 For a model line which had all the ingredients of true stylistic greatness, the carrozzeria Flaminias, while each of tremendous merit on their own terms, were not quite the all-out masterpieces they perhaps ought to have been – the Zagato Supersport being perhaps the closest to ideal that made (very limited) production.

As regards Tom Tjaarda’s efforts on the Flaminia canvas however, his initial effort was conclusively the more convincing of the pair.

16 thoughts on “A Right Pair of Nymphs”