‘Simple is efficient’ the adline stated. But Ford’s 1980 Escort really was all about design.

Throughout the 1970s, the Ford Motor Company’s European satellite produced cars that were precisely what large swathes of the market not only wanted, but actively aspired to. This highly lucrative recipe was a combination of tried and trusted conventional engineering, slick marketing, a gimlet-eyed focus on product strategy and well judged, contemporary style.

First introduced in 1968, the big-selling Escort model was successfully rebodied in 1975. However, by the latter part of the decade, it had fallen behind, stylistically, but particularly on the technical side. With most of Ford’s rivals moving inexorably towards the front-wheel drive, hatchback layout, the blue oval needed to act. The Erika programme was instigated around 1975 to do just that.

Ford themselves were no strangers to the technology, having successfully developed the compact FWD Fiesta model, which launched in 1976 (and the Taunus P4 some years earlier). Engineers at Ford’s Cologne development centre drew from this latter programme to define the chassis layout and architecture of their new B-segment offering. So like Fiesta, Erika would employ MacPherson strut front suspension, and rack and pinion steering, but with a new design-independent rear suspension, instead of the Escort II’s crude leaf-sprung axle.

Erika then, was to be a combination of simplicity: light weight, efficient engines, class leading aerodynamics), and sophistication: high levels of specification, convenience features, and attractive, sharp-suited styling. Indeed, under Ford of Europe’s Vice President for Design, Uwe Bahnsen, the intention was for the blue oval to achieve nothing less than outright design leadership. 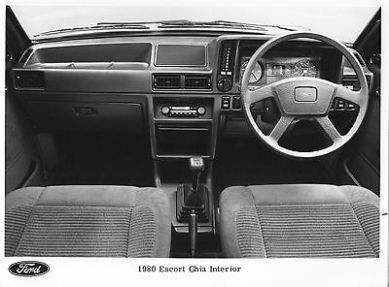 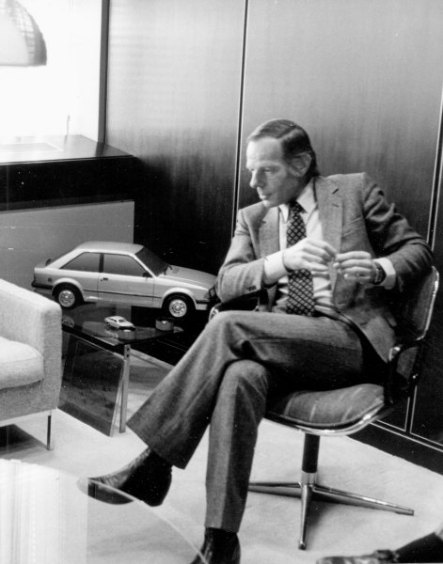 The critical and commercial success of the Volkswagen Golf lent Ford’s product committee serious pause; not only that, but in the interim, Renault, Chrysler-Simca, Fiat and Opel had introduced competitive front-drive hatchbacks into the segment, and with the existing Escort fading, there was a strong argument for a radical change. But despite the necessity to evolve the concept, the product strategists clearly felt that overt radicalism à la Ritmo would alienate loyalists.

Lead designer for the Erika programme was Klaus Kapiza, who proposed a crisply surfaced, strongly proportioned two volume shape with a pronounced aerodynamic ‘bustle-back‘, set to become something of a Ford design trademark. The shorter, but wider Erika body, with its pronounced wheelarch flares was intended to evoke a more powerful, more athletic stance, said by Ford’s PR to resemble ‘a sprinter straining on his blocks’.

Introduced in three and five-door hatchback form, a three-door estate was also offered. In typical Ford fashion, a wide variety of trim levels were available (base model, L, GL, Ghia); the top line models looking considerably richer and more finely detailed than the distinctly dowdy-looking entry-level versions. Later, a five-door estate was added, as was a Karmann-bodied cabriolet, a diesel-engined version and a three volume saloon, (the Orion) which was marketed separately, in a bid to attract traumatised former Cortina owners suffering from Sierra-shock.

No Ford model range would have been complete without a sporting version, and it’s believed that Uwe Bahnsen himself was responsible for the XR3 model being not simply a stripes and stickers go-faster model. According to Patrick le Quément*, who served as a senior design manager under Bahnsen at Merkenich, the Ford design VP fought hard at board level to ensure the XR3 could be taken seriously as a performance car – so while it would languish in the Golf GTI’s shadow throughout its career, Bahnsen could hardly be blamed for that.

Car magazine famously drove the Escort at Ford’s Merkenich test track at Erika’s press launch in 1980 and rather pre-emptively declared it to be the class of the field. Words were promptly eaten once they sampled the car in UK conditions and its punishing ride came to the fore, suggesting that lessons from the Fiesta had not been learned by Ford’s engineers.

Inside, the cabin ambience was deemed to be attractive and well screwed together, (albeit with areas of painted metal to be seen here and there), but poor rear seat legroom, a consequence of the short wheelbase (even the Mark 1 Golf’s was longer), marked it down against more commodious rivals. Overall however, the new Escort was adjudged a strong contender for class honours and quickly settled into its position at, or near near the top of the sales charts. In 1981, the Escort was awarded the coveted European Car of the Year trophy.

Journalists praised the CVH engines’ power, but noted it came at the cost of considerable roughness at higher revolutions. On early cars too, the automatic chokes proved notoriously reluctant to disengage. There were also issues with Ford’s electronic carburettors. Ford fiddled incessantly with Erika’s suspension settings over the car’s production run, eventually managing to obtain some semblance of compliance, but at the cost of precision at the sharp end.

Introduced at the same time as the Euro-Escort was Mazda’s 323, designed in conjunction with Ford, (the blue oval having taken a stake in the Hiroshima-based carmaker), leading some to believe there was greater similarity under the skin than immediately met the eye. Ford’s Australian satellite, rather than importing the Escort, chose to market the 323 in restyled form as the Laser.

Ford’s decision to package the Escort on such a short platform proved something of an own goal once Volkswagen delivered their second-generation Golf in 1983, which was a usefully larger car than its predecessor and would utterly define the sector for the remainder of the decade, despite the combined efforts of its European (and Japanese) rivals. Ford’s own response – the 1986 Escort Mark 4 appeared somewhat tentative by comparison, much improved as it was (in certain respects).

In essence, Erika was something of a transition car; the last in a series of finely tailored, crisply surfaced Uwe Bahnsen-helmed designs before the shift to radical soft-formed aero-inspired shapes emerged, as seen with 1982’s Sierra. It also confirmed the ascendency of the Cologne satellite within the European operations (although Dunton would remain central to the SVO side of operations).

Above all, the 1980 Escort was (foibles apart) an accomplished design mating Ford’s traditional market appeal with a newfound styling sophistication. It would be another two decades before the blue oval would be as progressive again.

*Author, Steve Saxty’s recent interview with Patrick le Quément.
*The Escort Mark 4 may be featured in a forthcoming DTW ‘Under the Knife’ feature.