In today’s instalment, Andrew gets up close and personal with his Nimrod.

Waves arrive in many forms; tidal, sound, shock, metaphysical even. Relating to my recent motor purchase, all of these and more were felt, some stronger than others. All made an impact, some longer lasting than others. Ownership (counted in minutes ) can be compared to a stone’s impact in water. The ripple effect: having apart from thirty two years behind a steering wheel, hardly any road testing experience – no car swopping auto journalist am I.

Yet perched on sumptuous leather, the view of that long bonnet out front, the rear in another post code, I felt a swell inside. A comforting sense of justification, an encompassing sense of the surreal – a car detached from reality, in my grasp. Disturbing waves are calmed, replaced by mellifluous currents. And this merely driving away from the Lamborghini hard standing.

Electing to foreswear the entire journey home on motorways by heading off piste provided an opportunity to allow the inner Setright to surface. However, being no expert in pitch or yaw, secondary ride and certainly no clues to the nought to sixty (two) time, my initial thoughts instead whirled gently around. From an epicentre of comfortable wellbeing to the further reaches, the ripples bounced back hard as I hit an obscured pothole that could have hidden one of the smaller planets.

Of course I lurched as did the car itself, but he also shrugged off the canyon with the gayest of abandon. This car would look after me, I concluded, regardless of all the hidden technology, air bags and the like. He might even calm down a fight or flight situation.

The physical changes from Škoda to Volvo are physical as well as metaphysical. The S90 is practically five metres long. But has that feeling of being oh-so careful with a new toy, as has become more defined in the passing days, or simply the car’s size that has brought about a change in driving style – on one hand being more lassez-faire and on the other, just feeling special? ‘After you, sir or madam’.

Just another road-user in the teeming whirlpool yet Nimrod, the Hunter, as I’ve named him (for this car is definitely male) has brought about a more relaxed air to my commute, while the supermarket trip, never exciting, has now become at least refined, dignified, even. One feels almost inclined to don a suit and tie. Owning such attire however, does not necessarily mean knowing where they reside.

As to the cars overall shape, I am very happy, else it would not have met my criteria of Large Saloon, not German. Creating that wave: the real wood inserts around the dash. Those chrome embellishments, surrounding the DLO, door bottoms along with the exhaust openings; I know they’re fripperies but they’re nice fripperies. 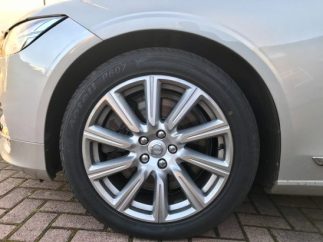 The front end with its leonine face. The ease with which to close that giant screen. Glancing out the window to see that sand colour become luminous along the bonnet flanks’, “scooped out volumes”, as Mr. Missoni names them. For whilst the driving aspect is agreeable, one can also fully appreciate the view when standing stock still, on the drive. The easy-open-close boot, Thor’s Hammer headlights, those oh-so comfy seats which are heated, as is the steering wheel. All valuable, make me both smile and wonder how on Earth I survived without them.

Demerits include the almost but not quite hidden wiper arms. I’m sure the design team could have hidden them more assuredly given five extra minutes and a few extra Kronor. I’d prefer the Orrefors crystal gear stick to the leather version but that remains most pleasing to operate.

The six-hundred page handbook. Not the easiest tome to wield, nor dip into to find how to adjust those tricky ambient light settings. Plus carrying that in the glovebox could easily constitute an few extra pounds of emitted carbon monoxide – not good. The wild fuel economy figures. One side of the dashboard tells me I’m getting 32mpg, the other informing of the 380 mile range one second, no, 370, no, 390. I stopped looking.

Those menus leading to sub-menus which require a teenager to fully understand and operate; no technophobe is this half centurion but I didn’t expect to undertake a computer science degree in order to check the oil (for no physical dipstick lies under the bonnet – only the one behind the wheel…) or enhance steering feel.

No, this is not a car to hop in and drive off within three seconds, one needs to undertake the checklist similar to a chopper pilot if one wishes to continue on one’s way without the electronic nanny screaming at you. New car nerves and idiosyncrasies? Most probably, though frustrations rise when an accidental haptic change occurs through a misguided digit prod.

On the whole, I’m blissfully happy. This car (somehow) makes me feel like I’m on a golden beach, yet simultaneously on a wave’s crest. Herr. Ingenlath set out to create a car that stands out and makes the occupants feel special. For me, job done Thomas. Are Swedish waters in any way convivial towards surfing?