DTW concludes its brief history of the post-WW2 rear-engined Renaults.

By 1960 the Renault Dauphine, while still popular, was beginning to look somewhat dated. The front-wheel-drive Renault 4 was at an advanced stage of development and would be launched in 1961. This would be the first of four identically formatted models, with engines mounted longitudinally behind the front axle, the gearbox placed in front, necessitating a gear lever mounted high on the dashboard, with the linkage passing over the engine.

Notwithstanding these plans, Renault still believed there was life in the rear-engined saloon layout and set about to design a successor. The new car would conform to Renault’s numeric model designation(1) and be called the 8. It was launched in June 1962 and was fundamentally a rebodying of the Dauphine. The wheelbase was just 3mm longer at 2,270mm (89½”) but the overall length grew by 63mm to exactly 4m (157½”). The 8 eschewed the Dauphine’s curves in favour of a more contemporary square-cut style. Certain quirks of the Dauphine were carried over, such as the unusual spare wheel storage compartment and the sliding rear door windows.

There were, however, significant mechanical improvements, the most important of which was a new engine, the 956cc 43bhp ‘Cléon-Fonte’ unit. This was named after the factory where it was manufactured, Cléon, while fonte simply means ‘cast-iron’ in French. This engine would prove to be a mainstay of Renault (and Dacia’s) small and medium cars for over four decades and would remain in production until 2004. It was an OHV unit with an aluminium cylinder head, five-bearing crankshaft and a sealed cooling system.

The 8 also came with four-wheel disc brakes as standard, an unusual innovation for a small car. It had a four-speed manual gearbox or, as an option from 1963, a three-speed automated manual with an electromagnetic clutch operated by buttons on the dashboard, essentially a development of the unit fitted to the Dauphine.

The new engine was designed with the facility for it to be enlarged and tuned. In 1964 a 1,108cc 49bhp version was introduced in a model called the 8 Major. This was followed by a Gordini sporting model which had a radically upgraded version of the same capacity engine. It now had a crossflow head with hemispherical combustion chambers and twin Solex carburettors, and produced a barely believable 95bhp. The transmission was a close-ratio four-speed manual gearbox. The Gordini had a top speed of 171km/h (106mph) and a 0 to 96km/h (60mph) time of 12.3 seconds(2). The handling was kept in check by uprated springs and dual rear shock absorbers, but it was still a car that demanded respect from its driver.

In 1966 the Gordini’s engine capacity was bored out to 1,255cc and twin-choke Weber carburettors replaced the Solex equipment. This increased the power output to 103bhp and the engine revved freely up to 7,500rpm. A new five-speed gearbox was fitted and the engine’s 13% increase in torque allowed the final drive ratio to be raised, which made high-speed driving less frenetic. External modifications were limited to two additional driving lights, although the car was immediately recognisable in its distinctive Gordini blue.

Autocar magazine tested this version of the 8 Gordini in April 1967. The testers recorded a maximum speed of 174km/h (108mph) and a 0 to 96km/h (60mph) time of 10.9 seconds. The price paid for this performance was that the car now weighed 865kg (1,907lbs) and fuel consumption on test averaged 12.6 litres/100km (22.5mpg).  The standard 38 litre (8½ gallon) fuel tank was supplemented with an additional 26 litre (5¾ gallon) tank in the front boot. The tanks were controlled by a fuel tap positioned next to the gear lever, although it seemed better simply to empty the rear tank first, as a full front tank improved the weight distribution somewhat.

The testers noted that the “nervous twitchiness” of the previous 1,108cc version had been replaced with neutral handling and much greater stability at speed. The competition-tuned suspension gave a firm and flat ride through bends with minimal body-roll. Only under extreme provocation in the wet could the rear end be forced to break away and this was easily corrected by applying some opposite lock. Despite the firmness of the suspension, the ride was remarkably good, aided by comfortable, well upholstered seats in the Renault tradition.

Autocar was hugely impressed with the 8 Gordini. It was very much the Golf GTI of its day and had the additional kudos of a number of wins in European rallying. 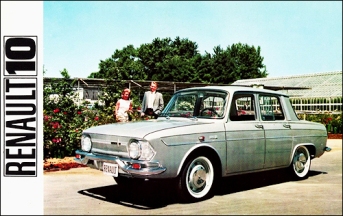 Renault also sought to extend the appeal of the regular 8 model by building a larger variant, the 10. This model was launched in September 1965 and utilised the body of the 8 aft of the A-pillar (with different rear end styling) but had a front end extended by 200mm (8”) all ahead of the front axle. This increased luggage capacity from 240 to 315 litres but gave the 10 a somewhat ungainly appearance with a front overhang that was nearly as long as the rear. The 10 was launched with the 1,108cc engine from the 8 Major and replaced that model in Renault’s range.

The first 10 had circular headlamps with outboard indicators and sidelamps, but the model was facelifted after two years and given rectangular headlamps to try and differentiate it further from the 8. In 1970 the 10 was given a detuned version of the 1,289cc engine from the front-wheel-drive 12, which had been launched in the previous year. The 12, however, proved to be a much more popular car and cannibalised sales of the 10, production of which ended in June 1971.

French production of the 8 ceased in late 1973 although FASA-Renault, the company’s Spanish subsidiary, continued production for its domestic market until 1976. The 8 was also built by Dacia in Romania from 1968 to 1971, where it was sold as the Dacia 1100.

The 1969 Renault 12 that effectively replaced the 10 (and, ultimately, the 8) marked the completion of the company’s wholesale switch to front-wheel-drive. The transformation was not, however, complete: Renault had yet to settle on a definitive mechanical layout. Unlike the 4, 5, 6 and 16 models, the 12 had its engine mounted longitudinally ahead of the front axle with the gearbox behind, giving it a long front overhang (not unlike the 10, oddly enough!) It would not be long before the packaging advantages of transverse engines, at least in small and medium cars, would overtake the previous FWD designs, although this further revolution would start inauspiciously with the 1976 Renault 14.

That should have been the end of Renault’s association with rear-engined cars, but the company’s tie-up with Mercedes-Benz would provide a (mid) rear-engined platform for the Mk3 Twingo. Renault and Mercedes-Benz agreed in 2010 to co-develop the third generation Smart Fortwo, second generation Smart Forfour and the third generation Twingo. The Forfour and Twingo, both launched in 2014, are manufactured in the same factory in Slovenia.

The current Twingo certainly has not recaptured the cheeky appeal of the original model and its unusual mechanical layout seems to bring rather more compromises than benefits. Autocar magazine concluded that it has “sanitised handling, disappointing refinement…flawed cabin packaging…sluggish performance, mediocre real-world economy and [offers] unexceptional value for money”. It seems unlikely that we will see another rear-engined Renault in future, and certainly none as charismatic as the brilliant Renault 8 Gordini.

(1) The numbers were initially prefixed with the letter ‘R’ for Renault, but this was later regarded as superfluous and dropped.