Peugeot versus Porsche: It wasn’t simply business, it was personal.

It will not be news to the majority amongst the DTW readership: the time when Porsche was forced to rename its 356 successor, the 901. French carmaker, Peugeot legally secured the rights to model names with a zero in the middle in 1929, when the 201 was introduced. Porsche yielded to threats of legal action from the lion of Belfort, chose 911 as the new model designation and the rest, as they say, is history. Or is it?

Because there is more to this than it would seem at first sight; the fact that other manufacturers such as BMW, Bristol and Ferrari marketed models with a zero in the middle for years without so much as a peep from Sochaux raises the question, why did Peugeot single out Zuffenhausen?

To answer this we have to go back well over two decades before Porsche presented the 901 in 1963, to the dark days of occupied France during the second world war. In June of 1940 France had surrendered to Nazi Germany and the new rulers quickly took action to utilize the French industrial complex in order to support the Reich’s war effort. Together with Citroën and Renault, Peugeot naturally was among the prime candidates.

While Mercedes-Benz and Auto Union would assume control of Renault and Citroën respectively, an executive from Adler, Paul von Guilleaume, was assigned at first to take over the reigns in Sochaux. The fact that a comparatively small manufacturer such as Adler was granted supervision of a far larger enterprise such as Peugeot was a result of a power struggle between the two larger manufacturers; Auto Union wanted Peugeot as well but was rebuffed by the German government which preferred a more balanced division of industrial powers.

Production of the 201 and 402 in happier prewar times.

From late 1940 onwards, Sochaux began producing vehicles and replacement parts in service of the German war effort. Meanwhile, in KDF-Stadt, renamed Wolfsburg after the war, Ferdinand Porsche and Anton Piëch (father of Ferdinand Piëch) had their eye on Peugeot and would soon take advantage of their considerable influence with the Fuhrer to take control of Sochaux from Adler.

The KDF factory which produced the Kraft Durch Freude Wagen (by this time no longer for the German public as promised previously however but instead solely for military use) and also the Kübelwagen and Schwimmwagen, lacked something that Sochaux did have – a foundry.

In February of 1943 Porsche and Piëch got their way. Von Guilleaume was out and Sochaux at their disposal. The Peugeot factory henceforth produced parts in large numbers for both Kübelwagen and Schwimmwagen as well as for Focke-Wulf military aircraft. To increase production the foundry was enlarged and prisoners of war added to the existing workforce.

Unsurprisingly Peugeot’s increased output for the benefit of Nazi Germany inevitably put it in the crosshairs of the Allies: Sochaux became the target of bombing raids, of which the one of July 15 1943 did the most damage and killed 125 workers. This event marked a tipping point; from what had up to that point been mostly passive resistance from the workforce turned into the active variety: sabotage. Arson in the tire warehouse, blowing up part of the forgery and more; it became increasingly difficult for the German minders to supply the Nazi war machine. 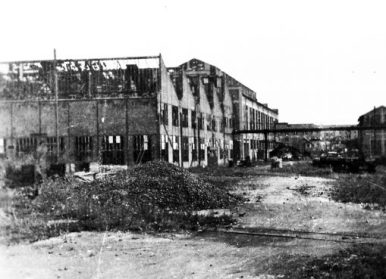 Extensive damage after the bombing raid.

D-Day and the subsequent re-conquest of an increasingly large part of France by the Allies prompted the German occupying forces to take rearguard action. In august of 1944 the dismantling of the Sochaux factory of its equipment and stocks began, to be transported to Germany and distributed over the Third Reich’s now ailing industrial apparatus.

Most of the remaining workforce was also moved to be put to work in Germany. On November 14 Sochaux was finally liberated, but the Allies found the Peugeot factory completely stripped, with any facilities and equipment that could not be transported destroyed, courtesy of Porsche and Piech. Jean-Pierre Peugeot and his workforce were as gutted as their factory.

With this knowledge it is not hard to understand that Peugeot had, to put it mildly, a bone to pick with Porsche, and seemingly used the zero-in-the-middle as a stick to hit back and exact some revenge. Other car brands, even fellow-German carmakers, BMW were left alone since Peugeot had no personal animosity towards them.

It also explains why Zuffenhausen in turn retreated without making a fuss, as they perhaps understood that it was better to keep this unsavoury chapter of their history away from public view. Compared to what Nazi Germany did to Peugeot through Porsche and Piëch, the French firm’s retaliation against Porsche may seem almost insignificant but it was the thought; a reminder of a partly odious and indelible past, that counted.