As the New Millennium approached, Jürgen Schrempp, Daimler-Benz CEO appointee in May 1995, was a man on a mission. Schrempp believed that the company was something of a sleeping giant. While it was consistently successful and profitable, with products that were highly regarded, he believed there was much more that could be done to leverage the storied marque name and extract maximum value for shareholders.

Over the preceding decades, Mercedes-Benz had carefully nurtured a reputation for building thoughtfully designed and technically excellent vehicles that were market-leading in terms of quality, safety and durability. They were, by and large, cars that one chose with the head rather than the heart and were favoured by those who valued understatement and discretion over extravagance and notoriety.

The flagship S-Class was the perfect transport for senior politicians, bankers and captains of industry, allowing them to move unnoticed and in comfort, avoiding unwanted attention from opponents, competitors or inquisitive journalists. The sheer ubiquity of Mercedes-Benz’s most prestigious model in the business districts of major cities guaranteed the anonymity required to conduct business (and other) affairs in secret.

There was, however, a growing demographic of ultra-high net worth individuals whose personal fame was very much part of their ‘brand’ and central to their success. Such individuals were often leading figures in the creative industries or dot-com millionaires. They were not mere chief executives, but owners of enterprises they had built from scratch. For them, the sober uniformity of even a top of the range S-Class would be regarded as far too mainstream, conformist and commonplace to be an adequate foil for their fame.

Schrempp decided that the Mercedes-Benz marque, which was to be stretched downwards almost to (if not beyond) breaking point with the launch of the first A-Class in 1997, could not at the same time be contorted further upwards to accommodate an ultra-luxury model aimed at this demographic. Instead, the defunct Maybach marque, a manufacturer of luxury cars in the inter-war years that had been acquired by Daimler-Benz in 1960, would be resurrected.

The idea of an uber-Daimler-Benz was not a new one, however, and long predated Schrempp’s appointment as CEO. Speculation about a reinvented 600, and even a revival of the Maybach marque, was circulating in the late 1980’s when the W140 S-Class was in development and was reported in Car Magazine by Georg Kacher.

A Maybach concept was unveiled at the 1997 Tokyo Motor Show*. It was beautifully finished and opulent in the extreme, but underneath was the bones of the 1991 W140 generation S-Class. The styling too was underwhelming, looking more like an enlarged S-Class rather than anything distinctive or original.

Daimler-Benz watched from the sidelines in 1998 as BMW and Volkswagen fought for control of Rolls-Royce and Bentley. The spoils were ultimately split between those two automotive giants. BMW immediately got to work designing a new generation Rolls-Royce limousine for the ultra-wealthy which would become the Phantom.

Volkswagen took a different approach and decided to combine its Phaeton luxury saloon project with the development of a new generation Bentley Continental range. These new models would be given virtually unlimited development resources, unlike their noble but impoverished predecessors. Schrempp knew (or should have known) that he had a real fight on his hands to establish the largely unknown Maybach name against the establishment stalwarts.

The production versions of the Maybach were launched in June 2002, unchanged in appearance from the 1997 concept and still based on the now decade old W140 architecture. The 57 was a four-light short-wheelbase model, the 62 a six-light long-wheelbase version. The model numbers referenced each car’s overall length at 5.7 and 6.2 metres respectively. Both were powered by a new 5.5 litre twin-turbo V12 producing 540bhp.

There was no doubting the quality of engineering and craftsmanship evident in the new cars, but their appearance was already overly familiar and dated: the W140 had been replaced by the lighter and more athletic looking (if inferior) W220 S-Class in 1998. Moreover, the Maybach (especially in LWB form) had a rather unfortunate ‘stretch-limo’ appearance that somehow lacked dignity.

This was a major miscalculation. Daimler-Benz really ought to have thrown everything at Maybach and made it a state-of-the-art technology and design landmark, simply to plant its flag in the sand and give Maybach a fighting chance. Instead, it was hobbled from the outset. 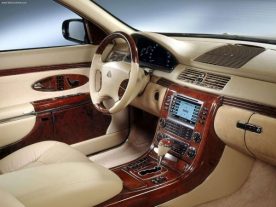 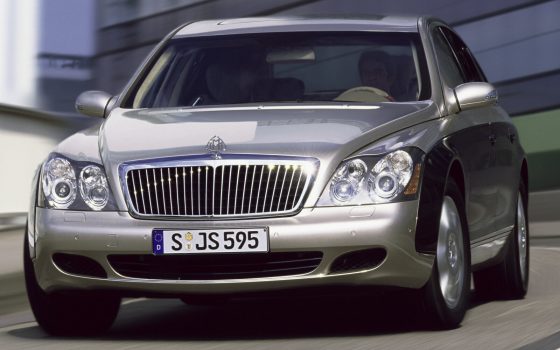 It was also very damaging to Maybach’s prospects that, by the time of its launch, the dramatic drop in Mercedes-Benz’s traditionally superlative quality caused by the drive to cut development and build costs was increasingly apparent. Nothing better illustrated the precipitous fall than a comparison between the W124 and its successor, the W210 E-Class. The former was built like a bank vault, the latter like an ordinary car, and not a very good one.

It was, however, the 2003 launch of the Rolls-Royce Phantom that effectively condemned Maybach to failure. The Phantom was effectively a moonshot programme, based on a bespoke aluminium spaceframe architecture and had a handsome and imposing ‘Art Deco’ inspired design that was simply in a different league to the compromised Maybach.

Daimler-Benz attempted to boost the appeal of Maybach in 2005 by launching a higher performance 57S version with a 6.0 litre engine, aimed at owner-drivers. This produced 600bhp and achieved 100km/h (62mph) in under five seconds. In 2008 a ‘landaulet’ version of the 62 was launched with a retractable roof over the rear compartment and an eye-watering price tag of over €1 million ($1.3 million).

There followed in 2009 ‘Zeppelin’ branded luxury versions of both the 57 and 62, with even more features and flourishes. There were countless personalisation options, including questionable dual-colour paint finishes.

Maybach did attract a number of notable celebrity owners, including music mogul Simon Cowell, pop stars Madonna, Nikki Minaj and Rihanna, and rap stars Jay-Z and Kanye West. Whether that was a help or a hindrance in establishing the marque as a serious player in the ultimate luxury market is a moot point. One particularly unsavoury Maybach owner is Kim Jong Un, North Korea’s Supreme Leader, who managed to circumvent international sanctions to acquire an armour-plated 62 model.

An interesting aside to the Maybach story was the unveiling of an extraordinary looking two-door coupé, the Exelero in 2005. This was built by Stola, an Italian specialist automotive engineering company, and was based on the platform of the 57. It was never intended for series production, but was commissioned by Goodyear’s German subsidiary, Fulda, to test and promote its new high-performance tyre, the Carat Exelero. So extreme was its appearance that the car could readily have served as a Batmobile in the movie series. It ended up in the hands of the aforementioned Jay-Z, who also owns a 62 Landaulet.

Maybach continued to struggle through the decade and was dealt a further blow by the 2008/9 Global Financial Crisis. In November 2011, Daimler-Benz announced that Maybach production would cease in 2013, with no replacement planned. Global sales in over a decade amounted to around 3,000 units, compared with an original forecast of 2,000 annually. The Maybach name was subsequently reanimated as a designation on top-line versions of the Mercedes-Benz S-Class and GLS-class models.

There has since been talk of a new stand-alone Maybach model and a couple of concepts have been unveiled, the Mercedes-Maybach 6 GT coupé and convertible in 2016 and the peculiar looking Ultimate Luxury saloon-SUV crossover in 2018, but nothing more tangible since.

It seems likely that in its current iteration, Maybach is viable. However, notwithstanding the 2016 and 2018 concepts, its re-emergence as a stand-alone marque with its own unique models seems unlikely, especially as the current strategy appears to be working and generating sales.

Daimler-Benz allegedly invested more than €1Bn ($1.3Bn) in the Maybach revival. That equates to a loss of more than €300k ($400k) in each car sold. However, this sum fades into insignificance alongside the €45Bn ($60Bn) the company allegedly spent acquiring, restructuring and disposing of Chrysler over nine years from 1998 to 2007. Add to that the disastrous decline in Mercedes-Benz product quality and reputation over which Jürgen Schrempp presided in the late 1990’s and early 2000’s, and his is not a proud legacy.

* Ominously, the Mercedes-Benz team promoting the new Maybach concepts had to cut short their stay in Tokyo and return to Stuttgart to deal with the fallout from the failed A-Class ‘Elk Test’, where the car rolled over in a simulated avoidance manoeuvre.

32 thoughts on “Act of Hubris”