Ponk-ponk-ponk-ponk-ponk-ponk. The electric glovebox release rapid-fired, a tiny machine gun waging war on my sanity. This time, instead of slamming it shut, I left the lid lolling open like a yokel’s mouth.

The Jaguar XF had been in my ownership for all of two months when the fault first manifested. Initially the glovebox would refuse to open, or sometimes I would find the glovebox open first thing in the morning. Then it took to dropping randomly whilst on the move, rarely at first, then with increasing frequency until it occurred multiple times every journey. The dealer diagnosed a faulty switch, necessitating a whole new glovebox assembly, including the lid. But now, a month later, the fix clearly had not worked. If anything, it was getting worse.

Finally home, I pulled the XF on to the drive and engaged the parking brake. Groannnnn. And then, bong: ELECTRONIC PARKING BRAKE FAULT flashed up in orange on the dashboard.

That was it: my last ounce of patience had gone. The XF was pushing me to my own Basil Fawlty moment and if it wasn’t careful, I was going to give it a damn good thrashing.

The very next day I was back at the dealer going through an all too familiar ritual: here are my keys, show me yours. Once again I resigned myself to suffering the indignity of their Fiat 500 curtesy car, a vehicle barely able to summon the wherewithal to surmount the curvature of the Earth. Although not much better than walking, the Fiat at least had a glovebox that stayed shut and a handbrake capable of holding the car on a hill.

Three days later, the cause of the XF’s plight had still not been diagnosed. Would I mind keeping the Fiat while the XF went to the Jaguar main dealer at Derby? Go right ahead, I said. Well, what else could I say, apart from ARRRRRRGGGGH?

Clearly something far more serious was afoot with the XF than could be fixed by a new glovebox catch.

In truth, I had an inkling and it was not good. Whilst one should always be wary of the opinions of idiots on the internet, dear reader, owner’s forums are troves of information on common faults. Surveying the many, many despairing posts on a couple of Jaguar trauma clinics– I mean owner’s forums, two causes of random electrical faults in XFs jumped out. Firstly, a battery with declining output can addle the Jag’s electronic brain, throwing up errors. A volt meter confirmed that the newish looking battery was indeed pumping on all cathodes.

The second possible cause was altogether less palatable. A seal at the bottom of the windscreen washer pump could fail, leading to fluid being driven along the wiring and – would you believe it? – straight into a junction box, thoroughly buggering the car’s central nervous system. A cat adverse to water, whodathunkit? I was fully prepared to believe this postulation, given the glovebox’s propensity for popping upon pulling the windscreen washer stalk.

A week later, a signal emerged from the embattled Jaguar compound. The random denizens of the internet were correct, the main junction box had indeed been destroyed by fluid ingress (the same complaint as my liver). If that sounds awfully expensive, it is, to the tune of a cool grand – not mine to pay, praise be to the dealer warranty Gods. 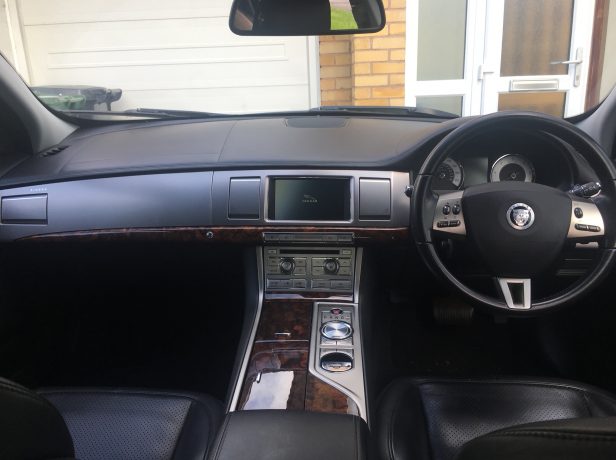 Once diagnosed, the XF languished in the big cat enclosure at Derby Jaguar for a further two weeks, the first waiting for a new main junction box, the second rewiring the car. All said and done, four weeks is a long time to contemplate the irony of buying an ultra-lux Jag only to be saddled with an economy Fiat. I was thus more than happy to hand back the keys to the courtesy car and receive my own in return.

The Jaguar settled back into the easy rhythm of commuting. The glovebox stayed shut, the parking brake worked. Or at least they did for the best part of a week.

Clearly the XF had not been fixed and my confidence that it ever could be evaporated. A notice of intention to return the XF was submitted to the dealership manager that afternoon. Within a fortnight, head office offered me a full refund. I actually felt bad for them; the dealership had moved heaven and earth to put things right. But after a total of six weeks at the vets and nursing a still broken big cat, I could take no more.

And so, a mere five months after taking ownership, the XF and I made our final journey back to the Burton dealership. Goodbye Jag. Of course, the glovebox did not drop once the entire journey.

So that was that. Now, with a year’s hindsight (doesn’t time fly in a global pandemic?), I regard my not-so-long-term test positively. Exasperating and deeply flawed my particular example may have been, but in 3 litre diesel guise the X250 XF offers the three Jaguar tenets of space, pace and grace in spades. Indeed, my most abiding memory was the civility with which it could despatch great distances at great velocity, in absolute comfort and in near silence. Not only that, everything felt RIGHT inside it, not just in terms of the major controls or the way it went down a road, but also in the serenity it fostered. Well, when the bloody car worked anyway.

The thing that galled me most about my experience wasn’t the inconvenience or the PTSD. No, what REALLY stuck in my craw was that, damn it, the naysayers were right. When I bought the Jag, people split into two camps: those who understood the dream, and those who suspected I had taken leave of my sanity. The latter camp was by far the larger. Why couldn’t I buy a sensible car, they said? Something newer with a long warranty and containable running costs? That the XF proved to be a rolling shitshow only confirmed their narrow worldview.

And yes, I can see their point now; my childhood dream of owning a Jaguar was a foolish one. Innocence dies on the altar of experience, and now I understand the safety of conformity, the comfort in compromise. Play it safe and you can never lose.

And then I thought, nah, sod that. I would rather stubbornly cling to a child’s foolish dream than trade it for a heart made of cold adult pragmatism. And so with that in mind, the very next weekend after returning the XF, I went out and I did it again.