AC Cars is claimed to be the oldest motor manufacturer in Great Britain, having survived many near-death experiences over the past 120 years. DTW recounts its long and eventful history.

The company now known as AC Cars was founded in West Norwood, South London in 1901 by engineer John Weller and his brothers, with the financial backing of John Portwine, a friend of the Wellers and a successful businessman who ran a chain of Butchers in London. The Weller brothers launched their first prototype car, a 20hp open tourer, at the 1903 London Motor Show at Crystal Palace.

Although well received, Portwine considered the car too expensive and instead encouraged development of a three-wheeled delivery vehicle, launched in 1904. This was called the Auto Carrier, from which the company’s name would henceforth be derived. It was a notable success, with customers including Boots the Chemist, Associated Newspapers and the Goodyear Tyre Company. A four-seater passenger version called the Sociable was also offered. It was even adapted by the British Army as a munitions carrier, with a machine-gun mounted up front.

The company’s name was changed to Auto Carriers Ltd in 1911 and it moved to Thames Ditton in Surrey. AC launched its first production four-wheeled car in 1913, a two-seater open sports model, but only a few were built before production was halted by the onset of the Great War in 1914. The company switched to the production of armaments for the duration of the war.

When the war ended AC returned to building cars and in 1919 John Weller designed a revolutionary engine known as the Light-Six. This was extraordinarily advanced for its time, an aluminium block straight-six with chain-driven overhead camshaft, four valves and twin spark plugs per cylinder. The first version had a capacity of 1,477cc and produced 40hp. This was later increased to 1,991cc, producing 105hp.

In 1921 a new investor, Selwyn Francis Edge, formerly of Napier fame, joined the company as Governing Director. Edge clashed with Weller and Portwine, both of whom left within a year. The company was renamed AC Cars Ltd in 1922. Despite some success in motor racing, previously strong sales were falling as other manufacturers offered newer and more attractive models. Edge bought the company outright in 1927 for £135,000 and renamed it AC (Acedes) Ltd. The stock market crash of 1929 forced the company into bankruptcy and Edge into poverty a year later.

It was then bought by the Hurlock family, successful South London hauliers who intended to use the factory as a storage depot. They did, however, allow servicing of AC cars to continue at the site. A single car was built for William Hurlock and he liked it sufficiently to allow limited production to restart. An agreement was reached with the Standard Motor Company to supply a new chassis and four-speed gearbox. Production continued throughout the thirties at a low level, averaging no more than 100 vehicles a year. The onset of the Second World War again saw the factory switch to the production of munitions and other military equipment.

After the war, the company returned to small-scale car production with a range of models based around the venerable 2 litre engine. The company was, however, kept afloat mainly by a government contract to build the Invacar, a fibreglass bodied mobility vehicle leased to the disabled, which remained in production until 1976.

In 1953, the company launched what would become its most famous model, one that would go on to epitomise AC Cars to the present day. The Ace was a two-seater open topped sports car with a lightweight tubular steel chassis and aluminium body, powered once again by Weller’s venerable engine, which delivered 100bhp (75kW). This was good for a 0 to 60mph (97km/h) time of 11.4 seconds and a top speed of 103mph (166km/h), as measured in a Motor magazine road test. The Ace quickly became popular amongst driving enthusiasts, who would use them for racing and rallying as well as everyday driving. A coupé version, the ACECA, was launched a year later. 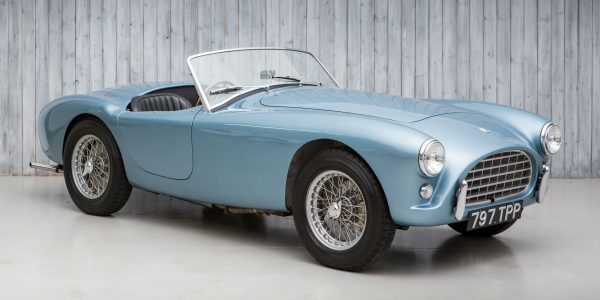 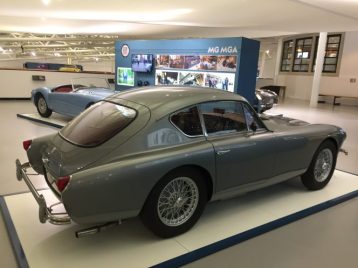 AC realised that the chassis could easily handle more power than the existing engine could deliver so, from 1956, the option of a 2 litre 120 bhp (89 kW) BMW-derived straight-six  bought in from Bristol Cars was offered. The new engine cut the 0 to 60mph (97km/h) time to about nine seconds and increased top speed to  to 116 mph (187 km/h). Overdrive was available from 1956 and front disc brakes were an option from 1957. The car achieved notable successes at international motor racing events, scoring class wins at Le Mans and Sebring.

There was also a 2+2 GT derivative of the ACECA called the Greyhound. Launched in 1959, it was based on the same chassis, but with a wheelbase extended by 10″ (250mm) and bespoke bodywork.  It was not a great success: only 83 examples were built during the four years it was on the market.

US automobile designer and racing driver Carroll Shelby admired the Ace’s success in motor racing and wanted to exploit the chassis with a more powerful engine. He negotiated a deal with AC in September 1961 whereby 1,000 Aces without powertrains would be shipped to the US. Here they would be fitted with Ford’s new lightweight ‘Windsor’ 260 cu.in. (4.3 litre) V8 engine and sold to customers through Ford dealerships as the AC Cobra. The car was a brilliant drive, and the association with Shelby, a famous and highly regarded racing driver, embellished its appeal further. After the first 75 Cobras were completed, a larger 289 cu.in. (4.7 litre) version of the Windsor engine replaced the earlier unit.

A small number of Cobras were fully built by AC in the UK, including a special Le Mans coupé as a factory entrant in the 1964 race. In preparation for the event, a Cobra driven by British racing driver Jack Sears was clocked at over 183mph in the early hours of the morning on the newly opened M1 motorway. The uproar caused by this and other similar incidents allegedly led to the introduction of the 70mph UK motorway speed limit in December 1965. This was initially a temporary measure but was made permanent in 1967.

The Cobra’s success continued and the car was progressively developed, with and rack and pinion steering fitted from late 1962, followed by more powerful engines, upgraded chassis and suspension improvements, The 1965 Cobra MKIII 427, so called because it was fitted with a 427 cu.in. (7.0 litre) 425 bhp (318 kW) Ford FE engine, was recognised by Guinness World Records as the fastest production car in the world, achieving 266km/h (165mph) in 1965 when tested by the US Car & Driver magazine. It held onto that record for two years, until it was overtaken by the Lamborghini Miura P400 in 1967.

In 1965 the Italian coachbuilder Pietro Frua designed and began producing svelte coupé and convertible bodies for a Cobra chassis, lengthened by 6” (150mm). These models were known as the AC 428 and were intended to appeal to a more prestigious market, in an attempt to boost the company’s profitability. The venture was not a success. The cost of sending the chassis to Italy for the body to be mounted, then back to the UK for finishing drove up the price to a level where the 428, lacking a prestige badge, just could not compete. A total of just 51 coupés and 29 convertibles were produced before production ended in 1973.

In Part Two, we will continue the story of AC up to the present day.

14 thoughts on “Born Survivor (Part One)”