Covering over 2000 kilometres in a week should be sufficient to determine whether the new Golf is swansong to a past era or herald to a new dawn.

Covid-Christmas was bound to be special. Even without any cases among our relatives, my partner and I did our utmost to plan 2020’s challenging festive season diligently. As usual, we were willing to travel to (limited numbers of) relatives at the other end of the country, but only if all relevant parties felt safe about it.

My better half’s 99-year-old grandmother made it clear that she’d rather take the risk than remain by herself (a state that had caused her to lose her ability to speak for a period during the first lockdown). Other family members organised themselves in such a way that certain branches would be able to meet, without mingling with others. Eventually, this enabled us to create a sound itinerary for these unusual Christmas holidays.

But before we could start our trek, professional commitments meant we could only precisely schedule our trip the weekend before Christmas, by which time rental cars had reached a status akin to toilet paper nine months previously. As much as we were eager to honour our carefully planned commitments, we certainly didn’t want to spend €600 for the privilege of driving around in a wheelchair-converted VW Caddy, nor €1,200 on a 3-series for a week. This resulted in a few days of needlessly unnerving alternative plans being devised and abandoned.

Thankfully, a great many customers seem to have taken advantage of car rental companies’ relaxed Covid-related cancellation policies, resulting in the entire lineup of our preferred provider all of a sudden becoming available on the morning of December 22nd. Which didn’t mean we bagged ourselves a bargain, but at least a proper car – in this case a Skoda Scala (or similar), for less than four figures.

The Skoda Scala eventually turned out to be a VW Golf, which was perfectly fine with me. Particularly having walked past a VW T-Cross at the rental company’s parking lot – the worst or similar I’d ever had the (dis)pleasure of being allocated.

As is well-known, the eighth iteration of VW’s defining product is really just a substantial facelift of its predecessor – a car I happened to like, particularly in GTI guise. However, despite its status as a mere update, this Mk VIII version marks something of a watershed too, in that it’s the first Golf created under the auspices of CEO, Herbert Diess, introduces VW’s all-new, and highly controversial user interface and, fundamentally is likely to be the last Golf as we know it.

So paradoxically, this moderately updated Golf must succeed at being competently mundane while simultaneously providing a glimpse of what the future holds for VW and the mainstream motor car. 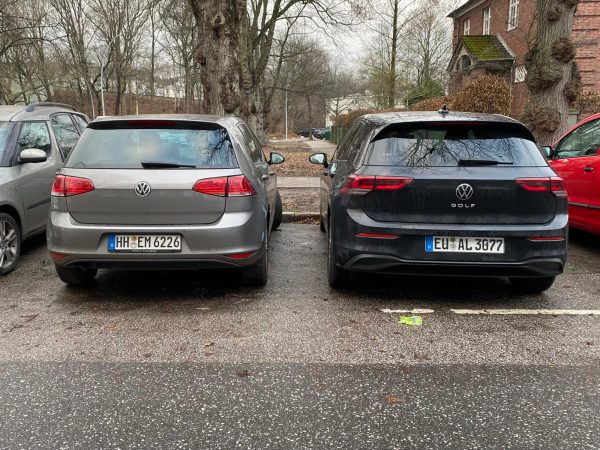 In terms of Golfness, Mk VIII sends out decidedly mixed messages. The doors open and close with the kind of subdued squelching noise that has been suggestive of Teutonic quality for some time. Wind and road noise suppression prove to be very effective when on the move too. The seats, though by no means outstanding, are definitely superior to those fitted to less prestigious brands’ cars (or VW’s own T-Cross).

The basic ergonomics – seating position, steering wheel adjustability etc – remain unchanged from the Mk VII and hence are perfectly acceptable. However, this solid basis has the effect of casting the areas where Golf VIII fails to live up to the promise of its name and heritage in a notably harsh light.

First of all, there’s the air-con, which never settles on a steady temperature, but oscillates between the extremes – a phenomenon we’d previously encountered in a Ford Fiesta, but not in a Golf, possibly the consequence of a cheaper unit being fitted to the Mk VIII version. Some of the plastics used in the cabin would cause Ferdinand Piëch (were he still around), to demand someone’s head on a stick as well. 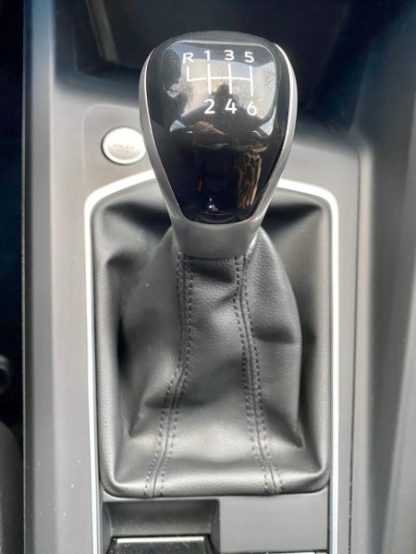 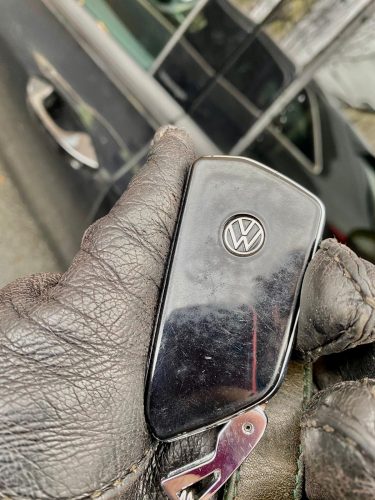 But this must be considered of lesser relevance in this context (even taking the nasty plastic cap on the gear lever – one of the main touch points after all) – into account. For the Golf doesn’t feel as if it’s made of Dacia-grade materials that have been rolled in white glitter, as with the VW ID-3. However, what is noteworthy, for all the wrong reasons, is the Golf’s user interface, which is every bit as awful as claimed by a great many members of the motoring press. It is, quite simply, the worst such system I have ever experienced.

Eschewing buttons for a combination of a touchscreen and numerous touch-sensitive fields, the Golf conveys an air of Captain Picard-era futurism. The naive graphics, what with their ‘3D’ grids and shiny reflections, also appear more like some tribute to Tron (1982), the Starship Enterprise’s Holodeck (1987) or The Conran Directory of Design (1985) than a revelatory breakthrough in automotive ergonomics. In fairness though, the display of just speed, fuel, sat-nav directions and immediate fuel consumption on the driver’s screen was far more legible than the previous version’s cacophony of digital gauges and information overload. 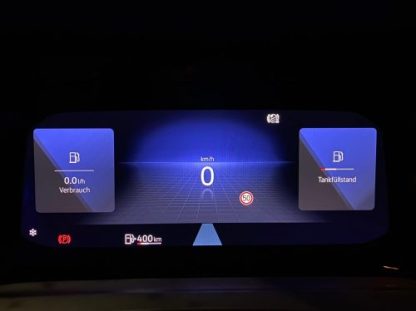 Its nostalgic appearance proved to be the least of the Golf UI’s issues the longer I experienced it, as the dashboard’s touch-sensitive fields’ complete lack of haptic feedback led to latent insecurity on my part, which didn’t abate over the course of 2000 kilometres spent behind the wheel. Truth be told, I delegated control of the main touchscreen to my partner, rather than acquainting myself with the intricacies of the (many) buttons on the steering wheel.

This resulted in her shouting at the screen on a regular basis, for example after she’d unintentionally changed the radio’s volume by having come too close to the field controlling it at the bottom of the screen. Such operating errors would prove to be very common, again without much improvement through familiarisation over the course of the week.

Driver aids, like the potentially nerve-wracking lane departure warning assist, had to be deactivated at the start of every journey via numerous sub-menus (putting Peugeot at the top of my hypothetical shopping list, on the basis of providing a dedicated button for this input alone).

Having lulled myself into a false sense of security by having allegedly switched off any active safety system, I was eventually introduced to another such nuisance, when the Golf unexpectedly came to an abrupt, ABS-assisted halt, just as I was driving it into my mother-in-law’s garage. So vehement was this display of kinetic forces in action that I feared I might actually have hit something – yet it was merely a dramatic introduction to yet another enormously irritating aid: Front Assist.

Unfortunately, we failed at adding the deactivation of Front Assist to our regular ritual at the start of each drive, leading to another needlessly drastic emergency braking action in a small village, as the Golf’s sensors had seemingly decreed I was in danger of crashing into an elevated flower bed at a T-junction. Despite my having turned the wheel by this point and hence the car coming nowhere near a crash, the Golf again came to a sudden, complete and unintended (on my part) halt. If another car had been closely behind us, a rear-end collision would have been inevitable.

As is well-known, VW’s newest UI system still suffers from major software glitches, resulting in us being unable to connect either smartphone with the car. Thankfully, the Golf’s DAB radio meant we had more choice and better sound quality than usual for our acoustic entertainment, even if we were denied the music of our choice. Little things please little people.

In that same spirit, the Golf’s meagre TSI engine made me abandon any intention of employing it in any pleasurable way. With no low-end torque, followed by a quick, faint jolt of turbocharged momentum that soon gave way to an impression of excessive strain, the downsized three-cylinder engine quickly established that providing driving pleasure was beyond its capabilities.

Since driving quickly brought so very little pleasure, I deliberately chose to drive it exceedingly economically instead. As the car felt underpowered under most conditions anyway, I changed into tall gears early, as suggested by yet another assist. Just a few years ago, I’d have considered such low rev levels somewhat excessive and even imprudent, but the combination of forced induction and very small swept volume meant an inevitable adoption of a very different, languid driving style.

Enjoyable this wasn’t, but with an average of barely more than five litres of petrol consumed every 100 kilometres (57 MPG), the Golf turned out to be as parsimonious as its joyless performance suggested. 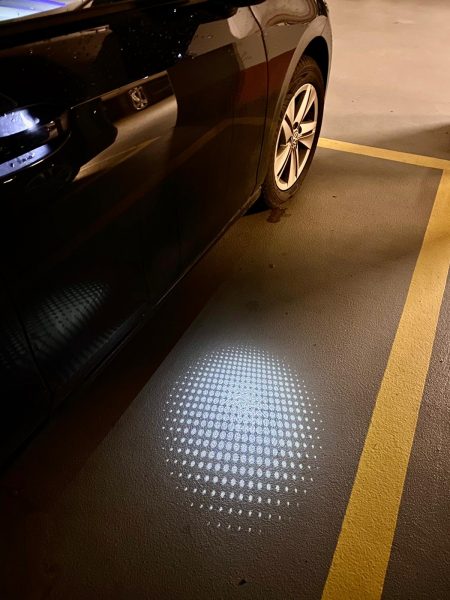 As I returned the Golf, a peculiar, alleged surprise & delight feature reminded me of how significantly the automotive paradigm has shifted. In addition to having lit door handles, the Golf also comes fitted with courtesy lights below the wing mirrors – which cast not just any light, but a strange ‘dot matrix’ pattern onto the pavement. Is this why the Roberts & Claudias of this world are supposed to aspire to a Golf? Such attention to detail?

If this courtesy light gimmick – and the spreading of Volkswagen badging all over the car – make the difference between this and a Skoda Scala, I’d rather do without all that surprise and delight.

The driving experience certainly wouldn’t be among the arguments in favour of choosing the Golf either. It’s a decent car to be driven around in, but as a driving tool, it’s downright unsatisfying. For that matter, I’d rather drive an electric car (though not across most of Germany in one go, for obvious reasons) than any of these feeble last hoorays of combustion-engined automobiles.

On the basis of this Golf, the mainstream car as we know it has run its course and is simply overextending itself in its quest to reach acceptable levels of efficiency. An internal combustion engine of this character simply won’t be missed.

Speaking of character, VW’s efforts to infuse this Golf with it must be considered misguided. Clearly, ostentatious solidity and ‘a cut above’ materials are seen as yesterday’s answer to the question of what mates a Unique Selling Proposition. This Golf still plays the refinement card of yore (and plays it reasonably well), but otherwise it is a product whose design – rather than just style – focuses too heavily on gimmicks.

In that context, wireless charging for one’s smartphone is welcome, just as the blue ambient lighting turned out to be quite a bit more pleasant than the previous, white iteration. Yet the pseudo-progressive UI design in particular, even if all features actually worked, must be considered no mere step, but a giant leap in the wrong direction.

The contradictory nature of this car makes itself obvious everywhere: in its faddish Heidedesign style, in its gimmicky features and its compromised driving experience. This isn’t a vehicle without substance, but too many of the changes introduced are to the detriment of this substance. The Golf has ceased to be a constant.