Our Under the Knife Series travels to the Americas.

Body Dysmorphic Disorder, or addiction to cosmetic surgery, is no laughing matter. Those afflicted by it, such as American socialite Jocelyn Wildenstein  are testament to the fact that one would be wise to accept when the limits have been breached. Cars of course have no free will and are at the mercy of product planners and designers as far as changes to their appearance are concerned.

The Ford Falcon started life as a compact by American standards at least, a plain, somewhat nondescript car but through a Wildensteinian quantity of facelifts during its long life outside of the USA, ended up as something of a parody of its former self.

Robert S. McNamara, the first Ford President from outside of the Ford family, and the only President that Henry Ford II did not fire, was the driving force behind the Falcon. One could argue that the resolutely rational and orthodox Falcon was McNamara on wheels.

The sales performance of the Falcon compared to its main competitors, the Plymouth Valiant and Chevrolet Corvair, would prove him right: neither audacious styling in the Plymouth’s case or unorthodox engineering in that of the Corvair managed to sway the buying public from overwhelmingly preferring Ford’s new compact.

The first generation Falcon remained in production in its homeland until the 1964 model year when a completely rebodied version was introduced. Between 1960 and 1963 the US Falcon was subject to three relatively mild facelifts. In Canada, and for the 1960 model year only, a Falcon with restyled front and stern was sold as the Frontenac; this was a stopgap car to allow Canadian Mercury-Meteor dealers to have a compact to sell that year.

From 1961 onwards they would be offered the Mercury Comet which was still in development in 1960. The amount of facelifts undergone by the Falcon during its stay on the North American plain thus stands at four. But the Australians and especially the Argentinians were not finished yet.

To the Antipodeans first: in September of 1960 the XK series Falcon was introduced in Australia and for the first two years would be the virtually indistinguishable from its American cousin, although it was not available as a two-door.

The XL Falcon came along in august of 1962 and displayed a new visage with its convex grille and Thunderbird roofline. The following February the XM Falcon took over, a substantially re-engineered version in order to answer complaints about the previous XK and XL Falcons not standing up well to Australian conditions. The XM was the first Falcon with an Australian designed body; the frontal aspect of the car was blunter than before, the newly restyled and generously chromed grille quite heavy looking.

For unknown reasons, Ford Australia skipped the N and O and went straight to XP for a yet again redesigned Falcon in March 1965. A taller, heavier and more substantial looking front end treatment had been created, perhaps to answer continuing criticism that the Falcon felt flimsy. Under the skin, Ford Australia’s engineers had also addressed the problem by adding a torque box steel subframe to improve the Falcon’s structural rigidity.

These measures seemed to have been successful as the XP Falcon took home the 1965 Wheels Car of the Year award. Incidentally, the altered appearance of the front styling of the XP was cleverly aided by re-using the front wings and bonnet of the concurrent Mercury Comet. In 1966 a totally new XR Falcon, based on the third-generation US version, replaced the XP. In its lifespan of six model years, the Australian Falcon had been subject to three facelifts – all different from the alterations carried out in America.

It was in Argentina that the first-generation American Falcon would survive the longest and along the way become the subject of increasingly questionable attempts at keeping the car up to date stylistically. The first Argentinian Falcons were assembled as CKD kits in early 1962; for this and the following year this South-American built variant was almost identical to the American version both in appearance and technical specification. Stateside however would see a newly rebodied second-generation Falcon for 1964 while Argentina’s Falcon soldiered on for two more years with a virtually unchanged appearance. 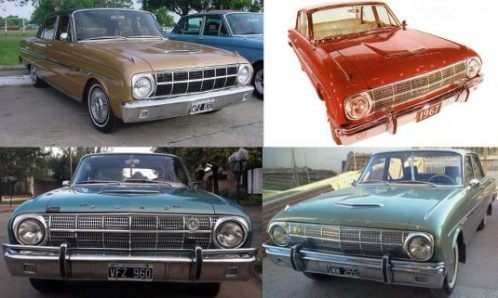 In May 1966 a restyling of domestic origin, courtesy of Jorge Tomadoni (also responsible for most of the other facelifts that followed), was presented. It was a relatively mild makeover; the grille which (reminiscent of that used on the 1964 Lincoln Continental but with only two headlights) looked quite pleasing and blended in well with the otherwise unchanged bodywork.

During 1970 Argentina’s Falcon paid another visit to the plastic surgeon and reappeared with more substantial bumpers, four headlights and the previous (non functional) scoop on the bonnet turned into a more subtle bulge by deleting the chrome trim. This version would be marketed until the end of 1972.

More heavy-handed alterations took place for 1973. This time not only was the front of the Falcon restyled once again, but the rear as well. The round taillights gave way to items with a squared-off oval shape. The bonnet lost its bulge, replaced by a slightly raised centre section. The arrow-shaped bodyside indentation on the front wings disappeared as well. These modifications notwithstanding, it must have been increasingly obvious to most onlookers by examining the unchanged main body that the base was getting on in years, but this did not affect sales which were as strong as ever.

The next major change in appearance followed in 1978. The Standard and DeLuxe Falcons could easily be distinguished by their front ends: the Standard had single round headlights which endowed it with a Toyota-esque look, while the DeLuxe was treated to large rectangular headlight units. The taillights were altered as well, and had become slightly more square in shape than before. The Falcon was still a very popular choice with Argentinian car buyers and 1980 would be its best year since introduction with over 34,000 produced.

In 1982 the fifth and final restyling would see the old bird live out its final years on the market. A simpler black grille with horizontal slats and different bumpers were fitted – the most obvious outward change however was now to be seen at the rear – Ford Cortina MK5 taillights replacing the smallish previous units.

While sales were still good at first, from 1984 on they started to collapse. The Falcon would continue in this final guise until 1991, the only change saw the previously chrome bumpers and mouldings painted black in its final year of availability.

On September 23 1991 the last Falcon rolled off the assembly line of the Pacheco plant. During thirty years of production, close to half a million Falcons had been sold in Argentina, only outdone by the also domestically produced Peugeot 504.

Why did Ford of Argentina stick so long to the ancient Falcon? The fact that Argentina was a closed market with no car imports allowed during most of its career certainly was a significant factor, and who could blame them if the car continued to sell very well year after year for three-quarters of its life?

The Argentine Falcon was subject to cosmetic alterations five times – the total amount of restyling actions performed on the first generation Falcon worldwide therefore coming to eleven facelifts (twelve if you count the altered one-year-only Frontenac as well).

An anagram of Ford Falcon Argentina is Don a frontal refacing. While the long life of the Falcon is in some ways a success story it is also a cautionary tale on the inevitable arrival of the sell by date for any product, however new and fresh it may be at its introduction.