Dirty Great Volvos: Part one – which deals with a mid-seventies international affair.

When Henry Ford II came to town, he got noticed. And when he showed up in Sweden with his entourage of executives to have a look-see at how they made cars in Gothenburg, he, along with his Yankee-Iron cavalcade, caused quite a stir, enough to inspire a new Volvo.

The Mk4 Lincoln Continental coupé was Henry’s weapon of choice – with that low roof, C-pillars you could hide a truck behind and virtually sixteen foot length, these cars caused impact outside but significantly more inside the factory gates – those gates being brand new. CEO, Pehr Gyllenhammar wished for more human contact in car production which led to the Kalmar plant, the world’s first team assembly plant. Small teams working in stages, fewer mistakes, better employee relations all made enough noise to entice Hank the Deuce over.

A more sober rendition in black and white. (c) Volvobertone.com 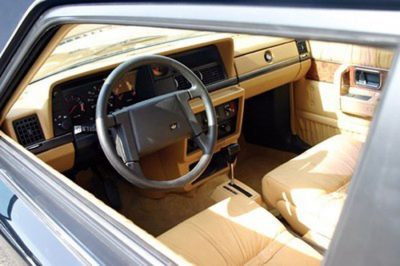 Plans were quickly drawn up for Volvo to make their own Lincoln, based on their 264 saloon which would incur huge new tooling costs along with production on a new line – bottom line – too expensive. Fortuitously, a number of Volvo representatives were at the 1976 Geneva motor show chatting to opposite numbers hailing from Carrozzeria Bertone, who had collaborated earlier, making a Europe-only 264 TE.

Enthusiastically agreeing to a fresh connection, the Swedes would ship over the mechanicals and floor pan, leaving the Italians the task of roof (with Swedish input), interior (ruched leather, plenty of timber) including finishing the new coupé, code named Three Crowns, ready for sale.

Volvo’s chief designer, Jan Wilsgaard is credited with lowering the 262 saloon roof some sixty millimetres, thus creating the 262C’s Marmite stance, “I took what I believe to be a rational approach to a modern personal car.” The raked windscreen and flush fitting rear side windows alongside that enormous C pillar certainly add weight to proceedings. With aluminium bumpers, a fairground ride could be aspired to, and if those rectangular headlamps don’t fix you in their gaze, the upright, gently chromed grille just may.

The craftspeople of Bertone attempted to soften the cars interior, with genuine elm veneer (with matching grain for both sides) on the door cards being the only surface change alongside that of the softest of leathers. Whilst in no way a beautiful dashboard, more industrial, brutal even, comfort here was king. Electricity operated windows, seats (set 2.3 inches lower than the saloon as a foil to that roof), mirrors, air-con and central locking, the floor having deep pile carpets.

Options were limited to a choice of radio/cassette stereo and, ahem, a limited slip differential – handy for the freeways. One’s 262C came initially in Mystic Silver with black vinyl roof with (gloomy) black interior, setting the sybarite back $16,000 in 1978, since the majority of these Swedish/Italian hybrids wound up in Henry’s back yard, often driven by the female of the species whilst husband went off to work in something even larger.(*)

Under that long bonnet sat that other international feature, the 2.7 litre PRV V6 engine shoving out to the rear wheels a rather unimpressive 127 bhp and 150 newton metres, which for a projectile hitting the scales at 1,400 Kg’s (3,000 pounds) amounted to a rather sedentary pace – 110 mph v-max. The engineers gave the coupé a turning circle of 32.1 feet.

Volvo believed just 800 coupés would be sold per year. In 1978, sales hit double that figure, posting 1,670. The Turin Bertone boys and girls were kept busy. 1979 witnessed 2,120 262C’s hitting the tarmac alongside new colour schemes; gold for the bodywork and a beige leather interior could now be specified. With that added 1980 exclusivity came the inevitable price hike; $17, 345 bought you a brand new Bertone Coupé which was the car’s second strongest selling year at 1,920. At this time Volvo fitted the air dam from the 242 GT, effectively reducing the cars top speed in accordance with American law at the time to well under 100mph (approximately 86).

Rarely chosen, a metallic blue may have lightened the load of this dirty great Volvo and once the vinyl roof was discontinued for ‘81, a gold roof over bronze bodywork with equally beige interior would now set you back $20,000; 912 coupés sold, a grand total of just 6,622.

The competition was, as one would expect, stiff. The Volvo was a full two thousand dollars more expensive than a similarly specified Eldorado, yet very similar (in price) to the Bavarian 528i. Mercedes 280CE with its creamy six cylinder mill offering more cachet undoubtedly. Peter Monteverdi, when upon laying eyes on Volvo’s new beast at the 1977 Geneva show proclaimed, “It’s inexplicable how they’ve made such a stylistic mess.”

Admittedly, this car will divide opinions, but check out the alternatives; the inspiration stemming from a Lincoln Continental Mk4, the Rolls-Royce Silver Shadow Mk2, Cadillac’s Brougham and Eldorado and the mainstream, European norm. Ruggedly built, dependably safe, left of the middle, the Volvo 262 Bertone Coupé became the first Volvo to be desired for what it represented – a change of the old guard.

(*) Research shows several thousand went initially Stateside. Many more were sold at home in Sweden, Norway, Germany, Finland with a sprinkling for the U.K. including single models to Venezuela, Puerto Rico, Japan along with in 1979, Ireland – a four speed manual in silver.