The Volvo Bertone 780 coupé was dying. When North American dealers were given one to sell, it could sit idling for months as most customers were looking for wagons or heading to rival badges with bigger engines – not choosing an unorthodox coupé, however intriguing. Lead times also proved challenging. A customer could be made waiting twelve months to sink into that ruched leather.

1987 vehicles had the PRV 2.8 litre naturally aspirated V6 unit pumping out less than 150bhp – the Germans ate the Volvo for breakfast. Originally a turbocharged variant selling like buttered popcorn was planned but technical issues prevented use. 1989 finally witnessed the now sorted B230FT four cylinder turbo unit  under the hood.

Volvo Cars North America (VCNA) were concerned on several counts. Even though the coupé was made for the States, sales remained low. What was needed was something more powerful, more appropriate to the territory, more sexy in outlook and appeal. One channel of distaste stemmed from the advertising; brochures were (typically) conservative showing the coupé’s elegant lines and beautiful scenery but all rather static. US customers wanted sport, movement, action!

Believing little would come out of Sweden now, VCNA took on the challenging role of rejuvenating coupé sales in readiness for the 1990 New York auto show.

Bill Hoover, VNCA Vice President gathered a team to produce the cheapest concept car. Bjorn Holthe was product placement manager, David Scheinberg a junior team member entrusted to get the task done. A standard 780 in white with an unfettered tan interior was chosen for transformation. Front and rear fascias, a boot lid spoiler, tinted windows, a more aggressive alloy wheel design and, (sacrilege!) de-chroming the car, even down to the grille.

Oluf Bendixen was chosen for the bodywork aspect. Now Italy-based, working for the Changan Automobile company, his new coupé renditions were hailed a success. Drawn lightly on vellum paper, using pen alongside pencil, markers for colour and shade were applied in the dark. One sketch was adhered to clay, modelled then used for fibreglass moulds. Once the paint, a three stage pearlescent sparkling white with blue undertones, and supplied by PPG had dried, thumbs went up, smiles widened.

Holthe, a no nonsense Norwegian who would fix those who challenged his decisions on timings (usually Scheinberg) with a one eyed squint, and a withering “I do believe there are twenty four hours in a day,” was good friends with a fellow named Gerald Jusco.

The American Sunroof Company was Jusco’s Detroit based sunroof and aftermarket supplier business with prototype convertibles to practically any given manufacturer a speciality. A few panels would be chicken feed, even if they were held in place by the most rudimentary brackets and tape. This car was for show, to gauge the reaction, test the water – suck and see.

To increase that appeal, the engine given top priority was actually an accessory. The Turbo+ was quick to spool up with credible 20hp gains over the standard turbo now shoving 188bhp at 5200rpm – Volvo’s most powerful mill. Labelled Generation 3 as a means of advertising its enhanced wares, this was more of what American drivers aspired to.

Holthe’s major enemy, time, slipped by but the car was ready for its moment in the limelight after around eight months of work. Once on the podium the car was subjected to a hastily applied lowering regime – sandbags. This quite literally lent the car a more aggressive aspect which along those new 17″ alloys with Goodyear tyres, specifically detailed by highlighting in orange, made quite an impact on show goers. Comments majored on the colour, stance, sporting looks and no chrome! Just as anticipated. 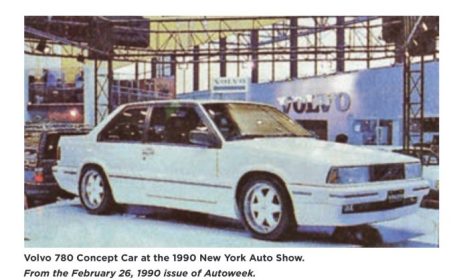 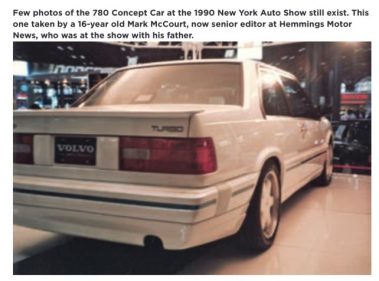 However, neither feedback nor orders were forthcoming from Volvo HQ or Bertone. The 780 concept was transported back to VNCA’s New Jersey warehouse where it languished for nine years. Dust covered and forlorn, the concept couldn’t actually be driven on the highway due to that lowering effect and the bodywork fouling the tarmac. Finally, a decision was made to offload the car; returned to original specifications, 15″ wheels and no sand bags. With just two hundred odometer miles, this became San Francisco based American Airlines air stewardess, Tricia’s pristine car for the new millennium and for an undisclosed sum.

This is where Davies Owens enters the fray. Already an enthusiastic late 780 coupé owner, he was naturally interested in Tricia’s car but baulked at the price and the similarities to his own, standard version, not fully realising the unique concept design. Tricia and the concept disappeared – for another fourteen years.

With his website now established, Davies began to investigate the whereabouts of this holy grail of 780 lore. With exhaustive research, the concept coupé was finally located in Sacramento in close proximity to the crusher. The then lady owner having agreed a sale to Davies in 2017 was caught driving under the influence (DUI) in the actual car. Impounded and in peril, a good friend of Davies sorted out all the necessary paperwork, with Davies even locating those show-only wheels at another location.

The 780 concept coupé is now undergoing an extensive rehabilitation operation. I’m sure I speak for all concerned readers here wishing Davies best wishes in returning this most unusual and unique car to the road.

With enormous gratitude to Davies Owens for the information and pictures. His website www.780coupe.com along with European sister site www.volvobertone.com contains a wealth of information that inspired these articles. Davies plans on showing the car at the SEMA show later this year.