The car that gave hope to BMW that independent, consistent success would materialise after a difficult post-war period.

As the 1950s drew to a close, BMW was in deep trouble. Only the tiny Isetta bubble car, built under license from Iso was a modest money maker. An enormous chasm gaped between the Isetta and the large, expensive 2600 and 3200 models, modernised versions of the 501/ 502 and by that time past their best.

The exclusive 503 and 507 were impressive vehicles to be sure, and especially in the 507’s case, beautiful, but neither had been a commercial success. In an effort to at least partially fill in the gap, the 600, in essence a longer, four seater Isetta was introduced in 1957.

It did not achieve the sales numbers that Munich envisioned; by this time Volkswagen had a solid grip on the domestic low price field and this provided proof that buyers now preferred a real car to something that was evidently still rooted in the bubble-car realm. After only 35,000 cars sold, the 600 was discontinued in 1959.

The state of Bavaria supported BMW with subsidies and loans but the company was in such dire straits by the turn of the decade that it came at risk of being forced into a merger (which would really amount to a takeover) with rival Mercedes-Benz. 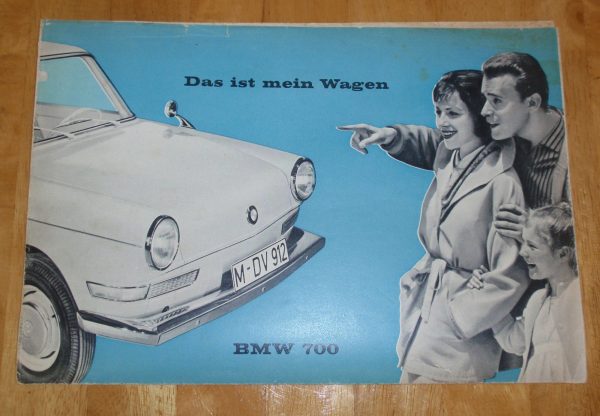 Wolfgang Denzel, an Austrian entrepreneur who manufactured sports cars based on Porsche 356 mechanicals (he was the distributor for Porsche in Austria as well), was also a shareholder in BMW AG. Not only was he worried about the future of his investment, he was in need of a successor to his ageing Denzel Sport.

He therefore came up with the idea of a small coupé based on a stretched BMW 600 floorpan. Giovanni Michelotti was enlisted for styling duties. In January 1958 Denzel initiated talks with Munich, which resulted in a prototype of the 700 Coupé being presented to BMW in July of that year. Michelotti’s proposal received a positive reception and Munich immediately requested him to design a more practical two-door saloon version of the car in order to replace the 600.

At the 1959 Frankfurt Motor Show the 700 was presented in coupé and saloon form and the public’s reaction was very enthusiastic. The modest and light (less than 700kg) rear-engined two-cylinder 700 may have had only 32 horsepower, but was a surprisingly sprightly drive by the standards of the day. 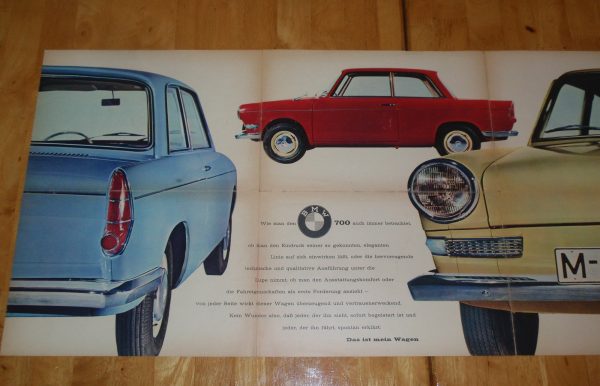 Soon, a convertible and more powerful sport versions with 46 horsepower would follow. The 700, BMW’s first monocoque bodied car, was an immediate commercial success and almost 190,000 were sold until its discontinuation in 1965. Disaster had been averted, cash kept flowing and with the follow-up success of the Neue Klasse 1500 in 1962, BMW would prove to be on course for a brighter future.

The 700 performed well in competition too: it won its class both in the Nürburgring 6 hours and the 1961 German Touring Car Championship. BMW even developed the 700RS, an extra powerful racing version with an aerodynamic aluminium body reminiscent of the Porsche 550 Spyder. The 700RS weighed just over 400kg but had up to 80 horsepower at its disposal; it would dominate hillclimb racing, a popular form of motorsport, throughout the early sixties.

Thus the 700 also provided the genesis of a new start in competition for BMW – arguably in its racing alphabet the letters R and S really should have come before M.

The first brochure for the 700 sedan – printed on cheap, almost newspaper-like material and only partly in colour – reflects the fragile financial situation that still was in effect in Munich at the car’s introduction. Over the years the paper has become brittle and yellowed; what will it look like in another 60 years? I guess the next custodian in line after me will find out.

The slogan on the cover “Das ist mein Wagen” (“That is my car”) alludes to the German small car buyer who by now was ready to move on from the cheap but cramped, slow and unsafe bubble cars; the Wirtschaftswunder being in full swing. As the several possible two-tone colour schemes demonstrate, some frivolity was by now permissible as well.

The other two brochures for the 700 Coupé and 700 Sport are from 1962. Paper quality had improved noticeably in two years. The regular Coupé offered 40 horsepower, the Sport 6 more, plus a rear anti-roll bar and a ribbed oil pan to more efficiently cool
the oil.

As with the cars themselves, brochures of sometimes undeservedly lesser-known models; the unsung heroes, are generally condemned to forever reside in the affordable price regions. The BMW 700 is a prime example; they are not always that easy to locate but if you do it should not cost you the earth.

17 thoughts on “The Little BMW That Could”