After the fall of Generalissimo Franco’s regime, Spain became free in more than one way; its market could now be opened to more products and brands produced outside of the country. This revitalization of the market stimulated the foundation of many new businesses, of which coachbuilder Emelba was one.

Commencing operations in 1978, Girona-based Emelba swiftly developed close ties to the national car maker SEAT and started producing the SEAT 127 Samba for them – the Spanish sister of the Fiat 127 Scout. At the time the market for small utility vehicles in Spain was dominated by Renault (4 F4 and F6) and Citroën (Acadiane). Oddly enough SEAT never brought its own version of the Fiat 127 Fiorino to market, instead Emelba built the SEAT 127 Poker: a 127 with a Fiorino-like rear section but executed rather more crudely.

The 127 Poker was still more a worklike van than people carrier, prompting Emelba to develop a startling mini-MPV of their own based on the Panda/Marbella platform. In april 1982 the Emelba Chato (an affectionate Spanish term for “good friend”) was introduced at the Salon Expomobile in Barcelona.

The Chato was the only vehicle on the market less than 3.5 metres long that could carry six passengers; it utilized the standard Panda/ Marbella platform so the internal volume had to be achieved by increasing the height of the body, resulting in the Chato being an exceptional 1.8 metres tall.

Passengers entered through a large sliding door on the passenger side into an interior that used mostly Panda/ Marbella interior parts including the dashboard; fitting six seats in such a short space inevitably meant that the driving position was less than ergonomically ideal.

The spare wheel which is situated under the bonnet in the regular Panda/Marbella was moved to under the rear luggage compartment. With power provided by a 843cc Fiat 850-derived engine the Chato, especially with six people on board could not exactly be described as a lively performer. Emelba offered the Chato in three versions: a minivan, a panel van and a pick-up. 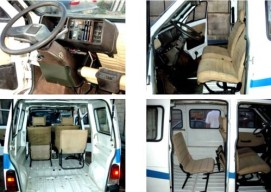 The Chato enjoyed some popularity in taxi use in Barcelona, and even as a police van. They were also frequently seen being used as small transporters or ambulances at Spanish airports. In civil guise however sales were disappointing. The introduction by SEAT of the Trans (a van also based on the Panda/Marbella but with a stretched platform) further diminished the Chato’s chances because most perceived it as better looking and it benefited from a much wider sales and marketing network.

Emelba introduced a successor of sorts to the Chato with the 903 in 1985. This looked similar but was built on the longer platform of the SEAT Trans. In addition it now had sliding doors on both sides and a larger 903cc engine – hence the name. Unfortunately for Emelba the 903 failed to make much of an impact in sales however and was discontinued a year later.

Even though the Chato was ahead of its time conceptually its somewhat crude execution, marginal performance and unusual appearance seriously impeded its market chances. Having said that, the Chato remains an interesting and obscure variation on the Panda/ Marbella theme.