Tragedy is sometimes a double-edged sword. Clearly, it comes with a keen sense of loss, but when it strikes, the human capacity to rise above the situation can be impressive. Firstly, as a means of honouring the departed. Second, not only to survive oneself, but to prosper.

David Ogle was head of the eponymous British design consultancy when he received an exciting commission in 1962. Boris Forter, a director at Helena Rubinstein cosmetics wished to address the rather homespun appearance of the existing Daimler SP250 Dart.

Tom Karen made impressions that continued to evolve for years to come. In at the deep end, Karen and his team brought the Ogle SX250 to that year’s Earls Court motor show. The radically different looking beast engendered public interest yet caused Daimler to look the other way. Commercially stillborn, Boris Forter officially received his car early in ‘63 with a sister model built for his wife, later. Rumours that six cars were made exist without corroboration.

Daimler’s lack of interest became Reliant’s Phoenix. One enthusiastic Earls Court viewer being Reliant Assistant General Manager, Ray Wiggin. Opening channels with Ogier led to rapid development towards Ogle’s initial manufacturing commission, utilising their Sabre chassis. With Tom Karen leading the design process, he wished to emulate the sadly missed Ogle while encompassing his own blend. “A car design is about form. Inside and out, lines must harmonise – like a Henry Moore sculpture.”

The 1964 Earls Court motor show launched the Scimitar GT S4. Fitted with three Skinners Unions, the Ford Zephyr 2.6-litre in-line six engine made 120 bhp and at least 110mph. To you sir, £1,292. Interest was high but sales stalled at around 300, until 1966 when the 3-litre Essex V6 came to play. In order for the new powertrain to fit, extensive chassis modifications were necessary.

As the new engine was shorter than its predecessor, weight distribution along with road manners was aided, necessitating a new nomenclature: the GT SE4A/B. Around 600 were produced with a cost conscious 118 opting for the 1967 version; the slightly better economy of the 2.5-litre Essex V6 slashed £120 from list price. Totals then approximating a thousand coupés.

Another motor show (for 1965) one-off from Letchworth would prove pivotal. Car safety glass manufacturer, Triplex used their knowledge of heating sand with a newly shaped Scimitar. Karen’s modification task included fitting 43 square feet of glazing, which included a laminated windscreen, heated rear and a heat reflecting roof into what became known as the Scimitar Glass Top Special. The car was shown on Triplex’s stand, and not Reliant’s.

Having enough wedge of his own, Nubar Gulbenkian tried to purchase the unique GTS and failed. Triplex declined the oil tycoon and adopted English eccentric’s offer, donating the car instead to the Duke of Edinburgh. Using it as his personal car for a couple of years, he returned the GTS, citing it as “too conspicuous.” Wiggin however, once more spied potential.

Together with Tom Karen, designers, Peter Bailey and Australian Bryan Fitzpatrick, Reliant’s chief engineer, John Crosthwaite and fibreglass expert, Ken Wood took the GTS from mock-up to Earls Court 1968 reveal in the space of twelve months. Karen described the car as “a hybrid of sports and estate car.”[2]

At 171” long, the GTE SE5 had a 99.5” wheelbase. Fibreglass kept the weight down to 2,620 pounds and a price tag of £1,759, the car would sail towards 120mph. From his Toymaker biography, Karen mentions the idea of the car’s rising belt line came to him whilst on holiday in Nice. His idea faced strong disapproval but standing firm paid off – 4,311 cars made and sold. He would drive nothing else for years.

Close working relations between Ogle and Reliant made for adroit styling changes; the front grille and headlights, while to the rear, air vents adjacent to the lights. In a move concurrent with the time, Ogle raised the stakes with their own Ogle Scimitar GTE. Cream exterior with a tan leather interior, differences to Reliant’s version were a glazed roof, retractable headlight covers and Ogle’s embossed badge to the bonnet’s front. Lady Moira Hodge became this cars owner – husband Sir John being Reliant’s chairman.

The Scimitar GTE garnered, on the whole, encouraging press. Claims of eight second 0-60 times and 120mph v-Max, the Evening Standard waxed lyrical, “one of the most handsome British body lines for some time.” Succinct in their approval was Motor’s, “Happiness is Ogle shaped.”

Other periodicals corralled a mixture of emotions. Autocar found the car somewhat Marmite in its looks but gave thumbs up with “100mph in third, balanced handling, good wet weather grip is assisted by heavy steering. Practical load bay, excellent fuel range, caters for those wishing to safely travel fast and far.” Thumbs turned downward with the car hoisted on the inspection ramp, “no chassis protection noticed.” Rust became the Scimitar chassis’ main killer. Car, rather more antipathic gave “we are not unstinting in our feelings over the cars styling.” Charming.

Sales continued and for 1971, the SE5a mustered a new dashboard along with the latest version of the Essex V6 but Reliant were keen to up the ante to executive level. 1975 saw the SE6 grow by 4” in wheelbase and 3” in track, creating much needed internal space, making the Scimitar a genuine four seater. Built for just one year and 543 examples as 1976 brought in the SE6a. Differences confined to uprated brakes and suspension but sales were a healthy 3,900.

From 1980, the SE6b came with Ford’s new Cologne 2,792cc V6, inaugurating another chassis change. Transmissions offered were four speed manual (optional overdrive), a three speed Borg-Warner automatic and form the SE6a onwards, Ford’s C3 automatic which helped pile on the pounds. As equipped, the scales tipped 2,762 Ibs, the additional power (now 135bhp) alleviating matters but in six year production run, only 407 were made – rivals had not only gained ground but shifted goalposts. 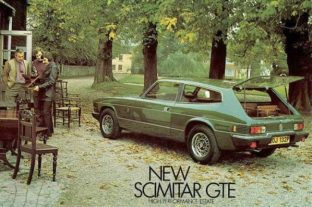 Also new for 1980 (though planned from ‘77) came the eagerly awaited convertible. Combining under-floor stiffening, extra bracing was had by a T-shaped structure, improving rigidity. The hood’s frame came via an adapted Triumph Stag, mohair covered. Two heavy factors restricted sales; a price of £11,360 along with Britain headlong into a recession saw just 442 GTC’s sell. The competition proved faster and more efficient leaving the whole project in jeopardy.

The Scimitar would live on, far from being just a press démodé but with a tumultuous journey ahead, dealt with in the forthcoming episode.

[1]  In the aftermath of the 1960 Jaguar takeover of Daimler, all decisions regarding new models (in-house or otherwise) would be taken by Sir William Lyons, no slouch when it came to matters of automotive style himself. He had investigated a rebodied SP250 (the SP252). Prototypes were built but it was not deemed cost effective and was abandoned. There is no evidence of any real interest in the Ogle-bodied car at Browns Lane.

[2] Over the years, the number of former Ogle and Reliant employees who have claimed credit for the styling of the Scimitar GTE have included the tea lady. According to reliable sources however, the person directly attributed to its styling was a gentleman by the name of Jimmy English.

15 thoughts on “Ogling The Blade”