I have, on a number of previous occasions, regaled readers of with tales of my odd obsession with Rover’s last (chance) saloon and a number of you were kind enough to express interest in an update regarding my second example of the breed; a 2002-registered (though built in 2001) 2.5 V6 Sterling, known as Connoisseur in the UK market. This car was purchased almost a year ago and has been in regular use as my sole form of motorised transport since then.

My beautifully blue Rover was blessed with two apparently-careful previous owners, who had not neglected its maintenance, and had, for its very nearly 20 years of age, a low kilometerage, to which I have added a good eleven thousand or so. Said car is also one of the most over-specified conveyances I have ever encountered – its original owner having ordered the topmost trim level, added a dark blue personal line leather interior (a lovely thing to have on the 75) and then ticked every other cost-option box on the order form for good measure.

Such exotic features (for 2002, remember) as satellite navigation, an in-dashboard television(!), rear parking sensors, power-folding wing mirrors, an electric rear-window sun blind, a CD changer that robbed the car of most of its glovebox and various other niceties were all present and, remarkably, given the universe’s general tendency towards increasing entropy with the passage of time, all in working order.

So, my purchase was a complicated, third-hand, almost two-decade old, six-cylinder conveyance made by a British car manufacturer that (as we now know) only had a few more years to live after having been spat out by BMW. You are no doubt already imagining the unreliable nightmare this car must be and I am not one to disappoint my readers. The car has required not one, not two, but three replacement bulbs (a brake, side-and headlight) during my ownership. A switch in the interior became difficult to operate and had to be replaced too. As if that wasn’t enough, on one occasion the car actually failed to start. I had to turn the ignition key a second time.

Stereotypical joking aside, the Rover has been as trouble-free as a car of its age could reasonably be expected to be and has confirmed my pre-existing opinion that these are fundamentally well-engineered and well-built cars, a fact that makes their (and their manufacturer’s) ultimate demise seem all the sadder and less necessary. As I wrote previously on the subject of the 75; there may have been, in the end, insufficient room in the marketplace for what MG Rover was offering but in product terms, they went out with a bang.

I note the above in regard to the core range of cars, of course, and consciously leave aside any reference to distractions such as the Xpower SV or bought-in nonsense like the CityRover, upon which other DTW writers have already commented sufficiently. Considering the fundamental goodness of the Rover 75 / MG ZT twins (at least in big-engined V6 form) and the sheer charm of things like the MG F, it still seems a terrible shame that MG Rover should have ended the way it did.

Alas, we denizens of DTW are no strangers to the unfair fate visited upon once-great marques and it is entirely possible to argue that MG Rover’s relatively quick demise, like that of Saab, was preferable to the continuing zombie existence of Lancia or the shadow that now bears the illustrious name of Citroën.

Sad philosophising aside, what’s it like to live with a 75 long-term then? Well, largely delightful actually. As I have already noted, the car has given virtually trouble-free service and there are very few objective faults to note (though I will return to one shortly). What is important to state, however, is that the 75 is a very particular type of car offering a very particular type of driving experience; one that has vanished from the marketplace in the intervening years. If that’s what you want, there may be no better car for you. If it isn’t, you probably won’t like it much.

In writing this article, I wanted to avoid the baby Bentley and mini Rolls Royce clichés that were much used at the time of the Rover’s launch but, in all honesty, those are valid descriptions of the car. The 75 (certainly in 2.5 litre, top-spec form) is an effortless, soft-riding, classically-styled, not-huge, luxurious carriage that seeks to isolate you from the cruel world outside in a pleasant cocoon of polished walnut and soft leather, and does so very well.

Although it has an excellent chassis and handles surprisingly well, it is tuned for comfort and compliance. The 75 is ideal for someone that secretly fancies a series 3 Jaguar XJ as a daily driver but knows they need something smaller, more modern and less generally insane. For enthusiasts of Type R Hondas or M Sport BMWs, it is not. 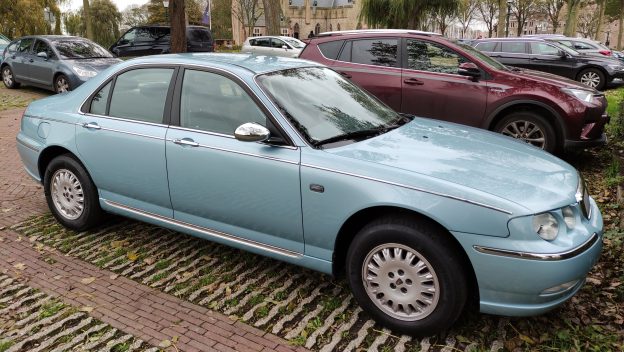 One aspect of the 75 that does have a sporting side to its demeanour is Rover’s 2.5 litre KV6 90 degree V6 engine and this deserves a paragraph to itself in any case because (despite a difficult start to its life, being fitted in effectively pre-production form to the Rover 825) this is a splendid engine. Though smooth and quiet at the low revs the car’s 5 speed auto-box normally prefers, more and more often I found myself sticking the car in sport mode and pushing the accelerator pedal further than necessary upon exiting roundabouts simply to hear the delicious V6 roar.

This engine loves to rev and makes a wonderful noise whilst doing so. It is also at this point that you get some real shove from the unit (it is no low-down torque monster) and rapid progress can be made, should you so desire. It’s no surprise that the 2.5 litre KV6 was chosen as the basis for both the MG ZT 160 (initially) and 190 power-plants.

I promised to return to a more critical observation and that concerns the driver’s seat. I suffered a minor back injury a couple of years ago and, though I have made a good recovery, since that time I have become acutely sensitive to the support offered by seating. The 75’s broad front seats are initially comfortable but no amount of fiddling with the adjustable lumbar support on the driver’s seat gave me the right combination of lower and mid-back support for long journeys, it was either enough of the former and too little of the latter or enough of the latter and too much of the former. Weirdly, the passenger seat seemed to offer a better compromise, although that could be a question of wear. This point is of course somewhat personal but I would urge anyone considering a 75 to check the comfort of the seating during a good long test drive.

So, how would I summarise the 75? It’s an excellent car of a particular (unfashionable) type that will appeal to a certain sort of person. The seating comfort is something to pay attention to for those of a sensitive spinal disposition and, of course, the as-yet unmentioned elephant in the room is MG Rover’s infamous ‘Project Drive’ cost-cutting programme that meant cars built from the (very) end of 2001 onwards lost the signature real walnut dashboard and further trim (and even some mechanical) niceties later on. Having said that, if it is your sort of thing and you can find a well looked after, early-ish, example with the right engine and specification, the Rover 75 is a lovely car to own and drive.

Why, then, despite the praise I am busy heaping upon the 75, does the attentive reader detect a certain element of finality about this not-quite-a-year later report? Well, the seating issue, combined with the desire to change gear at a moment of my own choosing; (manual V6 75s do exist but were never sold in this market and in any case make hen’s teeth look common), has meant that the Rover and I have recently, tearfully, parted company.

This happened rather sooner than expected and had to do with the appearance of something a bit special and rare that has very recently become the 75’s replacement. This will appear in DTW in due course but as an indication in the meantime, if you will forgive me the childish indulgence of a riddle: When is a Rover 75 not a Rover 75?