Regular DTW readers may by now recognise my curious obsession with the ill-fated products of the late MG Rover company and may also recall a recent report on spending nearly a year with a 2.5 litre Rover 75 Sterling. At the time, I intimated that the Rover had been replaced with something related that was just a little bit rare and special.

Whilst I came very close to buying an MGF once (a delightful little car, for all its faults), I have never previously owned an MG; the Rover 75 being the primary focus of my penchant for the glorious failures of the British motor industry. In fact, at the time, I found the Mk1 version of its MG ZT sibling quite uncouth and unappealing, certainly in the luridly coloured and wildly bespoilered launch versions that appeared in the motoring press in the early 2000s – a world away from the civilised restraint of the Rover.

I later learned, courtesy of James Taylor’s excellent Rover 75 and MG ZT: The Complete Story, that those initial cars were quite literally designed for maximum visual and visceral impact. A year after launch, MG Rover toned down the ZT considerably, replacing the hoop-shaped rear spoiler with a subtle lip and moving the extra-stiff sports pack suspension, which had been initially fitted to all cars, to the options list. From this point onwards, the ZT was a more civilised beast, though still much more firmly sprung than its Rover sibling. 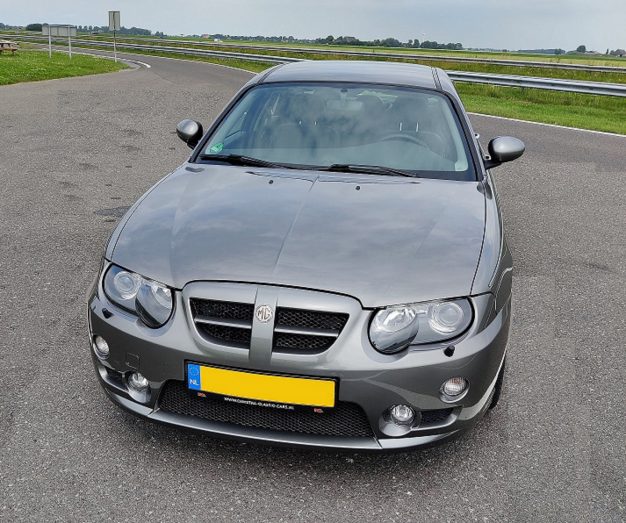 In 2004, as the financial situation at MG Rover became increasingly perilous, both the Rover 75 and MG ZT were given a facelift to create the Mk2 versions of these vehicles. Clearly designed for maximum visual renewal without making expensive sheet metal changes, the Rover facelift grafted a rather angular front end onto the 75’s voluptuous flanks and was, put mildly, not an unqualified success.

The MG ZT, conversely, was given a more rounded new face centred on the new MG family grille that debuted on the XPower 500, which toned far better with that car’s dechromed sides. In fact, to these eyes at least, the Mk2 ZT is a significant improvement on the Mk1, placing it on the very short list of cars that actually became more appealing when they were facelifted.

By April 2005, the situation at MG Rover had become untenable and production of the ZT, along with all other Rover and MG models, ceased. Cars that were already built continued to be registered to purchasers for some time, including a particular left-hand drive MG ZT190 in XPower grey that was purchased later that year by a gentleman in Germany, who carefully used it for little more than a year before sadly becoming too ill to drive. After this, the car was kept in storage for over a decade, before being imported to the Netherlands in 2020 by a classic car dealer who had it fettled, registered and used it as his personal car for a few months before adding it to his stock; the same classic car dealer who previously sold me my Rover 75.

And so it came to pass that I, in July of 2021, acquired an end-of-the-line 2005 MG ZT with a mere 40 thousand kilometers (less than 25 thousand miles) on the clock, which in terms of actual usage was barely two years old. It even still had the new car smell in the interior; a genuine timewarp vehicle. 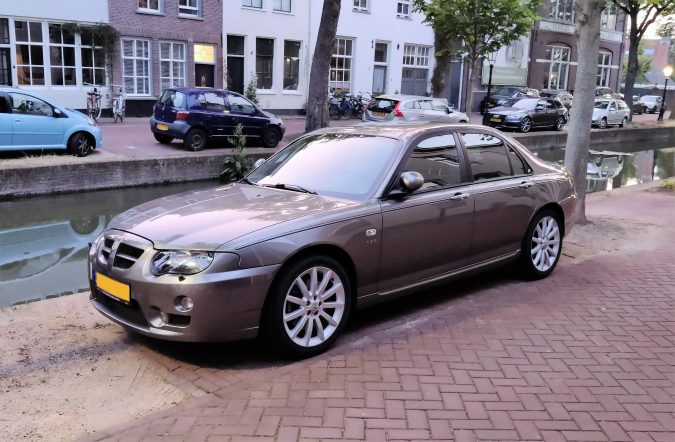 Visiting the vendor for a test drive, he impressed upon me how different the ZT was from the 75 in terms of driving experience and after climbing in I quickly realised he was right. It may be tempting to regard the ZT as merely a GTi version of the 75 (and its conceptual origins in the Rover 75 Design Theme show car might be taken to indicate this) but in truth the mechanical and cosmetic changes are rather more rigorous.

The 2.5 litre KV6 six cylinder engine that I had so enjoyed in my 75 has, in the ZT190, been modified both electronically and mechanically to raise its power output to (surprise!) 190hp. Said V6 is mated to a close-ratio mechanical gearbox and a much quicker, less damped throttle pedal. The exhaust system gives the engine note a harder, but not uncivilised, edge (and may account for a couple of the extra horses).

The chassis tuning applied to the ZT is extensive. The expected big wheels and tires are of course present, together with significantly stiffer and lowered suspension utilising new springs, dampers and anti-roll bars, but the changes go further: Said suspension is mounted to the car using aluminium rather than rubber components and the steering is quicker. The car’s brakes and accompanying ABS system are also upgraded.

On the road, particularly to a driver already familiar with the 75, the result is transformational. To the poise that the Rover already possessed has been added a huge dollop of grip and stability, making for a car that is very difficult to unsettle and thoroughly enjoyable to drive.  The ZT feels more responsive and eager, whilst the manual gearbox and increased power give the driver more control over the vehicle’s manner of progress.

Perhaps most impressively, this has been done without ruining the ride quality. The MG is, of course, much firmer than its older sibling but it is not crashy or too hard, refusing to become unsettled by bumps or undulations in the road surface. It’s an excellent compromise and makes me pretty sure that the decision to relegate the sports suspension pack to the options list was a sensible one. 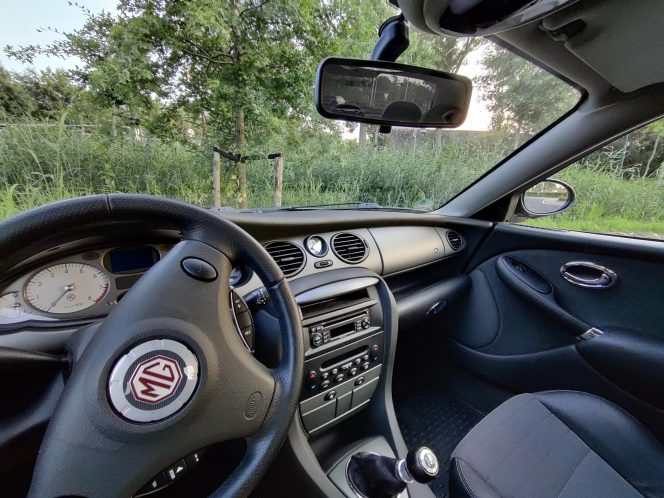 In addition to the exterior changes already discussed, the ZT’s interior was also subject to a re-style, which was then further tweaked for the Mk2 facelift. Whilst the architecture of the interior is unchanged, the wood and chrome of the 75 has been replaced with swathes of technical grey (yes, it’s really called that) material. The instruments now light up in a cool blue hue, rather than the Rover’s warm orange-red glow, the door trim is charcoal rather than cream coloured and the 75’s P6-style lounge seating has made way for figure-hugging sports seats (which are excellent, as long as one is relatively narrow of frame).

But what, I hear you cry, of Project Drive’s deprivations? Surely a ZT produced at the point when MG Rover was staring bankruptcy in the face must be made from chewing gum and sweet wrappers, held together with borrowed string? I am, after all, on record as stating that Project Drive gradually ruined the 75. In the case of the ZT, however, the story is a little more nuanced.

Replacing the Rover’s real walnut dashboard with plastic wood (very much a turning point in that sad story of cost cutting) was a miserable cheapening of the 75 but had no impact whatsoever on the ZT, which never had any wood trim (real or otherwise) to start with. Similarly, the MG was spared mechanical economies such as reducing wheel and tire widths or deleting the rear anti-roll bar on 4 cylinder cars that were visited upon its Rover badged sibling.

This is not to say that there is no evidence of money having been saved on my late-model ZT: By the time this car was produced, the neatly integrated (and BMW sourced) audio systems had made way for cheaper, generic head units with inferior aerials, the leather upholstery is of a lesser quality compared to the magnificent stuff in my old Rover and some of the interior plastics feel coarser and cheaper.

That technical grey trim looks quite nice but touching it is not a particularly pleasurable tactile experience. Having said all this, everything seems just as well screwed together as in my old Rover and if I compare the experience of sitting in this car to my memories of the couple of contemporary BMW 3 series I have driven (probably the ZT’s most obvious competitor) then the MG has at least as pleasant an interior to be in.

So how has living with a ZT for a couple of months been? Well, the surprisingly numerous Dutch speaking contingent on DTW will be familiar with the term pechvogel, which could be literally translated as bad-luck-bird. Said epithet could very literally have been applied to the poor fowl that attempted to cross the motorway in front of the car traveling in front of me on my way home from picking up the MG and its guts were liberally splattered onto my new car to prove it. Though sentimental enough to feel bad for the poor animal, I am not a superstitious sort and did not regard this as any sort of omen (an omen that can be washed away with soap and water can hardly be regarded as possessing real force, in any case).

I was a little more perturbed, however, by the progressively louder banging noise that started to emanate from underneath the car as I embarked upon my first spirited drive in the country in the ensuing days. A rapidly dispatched breakdown mechanic revealed that one of the brackets holding the new silencer that had been installed as part of the car’s recommissioning had come loose, allowing the exhaust more vertical movement than it is traditionally permitted.

Undaunted by these minor setbacks, two weeks into my ownership of the ZT, I decided to drive to Amsterdam and so ventured into the purgatory that is the A10 ring motorway surrounding our capital city. An accident up ahead led to lane closure and slowed progress to a stop-start crawl that proceeded in a tediously uneventful and slow fashion until I stopped for the nth time and the van driving behind me didn’t. Though the loudness of the bang and the sickening lurching sensation suggested otherwise, the damage to my car (in contrast to the damage to my nerves) was cosmetic, confined to the rear bumper and spoiler. 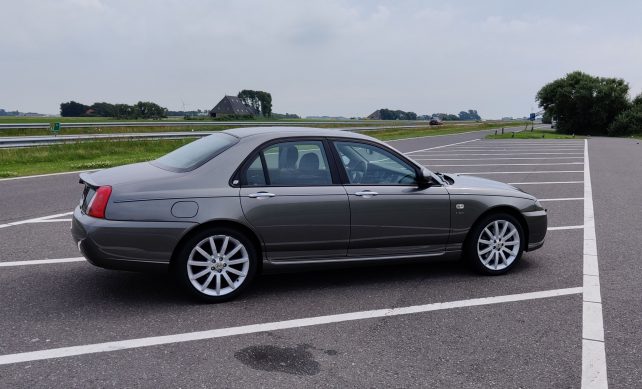 I will spare you, dear reader, from the details of the ensuing nightmare of recrimination and rage surrounding my attempts to get the damage fixed, suffice to say that firstly, insurance companies are staffed by those, to borrow Mr Herriott’s expression, not quite bad enough to be criminals; secondly, there is something wrong with a world in which simply lying absolves one of responsibility for one’s actions; and thirdly, cosmetic surgery (as any Hollywood star can tell you) can be really expensive.

Whilst none of the above has any bearing on the MG’s fundamental qualities, such unpleasant experiences can cast a shadow on the enjoyment of a new car and I will confess that following the last incident on the motorway, I had a weak moment in which I wished I had never bought the thing. A day or two later, however, I needed to go somewhere and so climbed again into my drivable but no-longer-perfect ZT. A few metres down the road, I had fallen in love with the car all over again.