More than merely a car, a state-sponsored project in political and social engineering. Celebrating the Alfa Romeo Alfasud on its 50th anniversary.

In the years that followed the end of the Second World War, successive Italian governments faced a seemingly intractable problem. Northern Italy had become increasingly urbanised, industrialised and prosperous, but the south remained largely a rural backwater. By 1950, income per capita in the south was roughly half that in the north, and the gap was widening. Much of the south’s agricultural land remained in the hands of large landowners and was poorly managed and often unproductive. Many unemployed young people simply migrated north, robbing the south of much of its potential labour force.

Acknowledging this economic and social divide, the Italian government established the Cassa per il Mezzogiorno (Southern Development Fund) in 1950. Its initial purpose was to provide funding for desperately needed infrastructure such as roads, water and electrical supplies, land reclamation, and new schools and colleges. This was followed in the late 1950s by an effort to encourage existing state and privately-owned industries to expand into the south by offering generous grants and tax breaks.

This endeavour was only partly successful. Many of the recipients of the financial incentives were large state-owned companies that built highly automated plants, the so-called ‘Cathedrals in the Desert’ that did not offer much in the way of local employment. Little money was made available for local start-ups. Many infrastructure projects were poorly conceived and badly managed, and there was a distinct stench of corruption regarding the distribution of funds.

Alfa Romeo had been state-owned since it was rescued by the Italian government in 1933. After the war, it leveraged its success in the newly established Formula One motor racing championship to position itself as a manufacturer of desirable, upmarket saloons, coupés and convertibles. The company experimented with smaller transverse-engined FWD prototypes in the 1950’s, Project 13-61 and the Tipo 103, but these never made it to production.

By the mid-1960’s, Alfa Romeo was again considering entering the flourishing small car market and approached the Italian government to help fund the project. The government agreed to provide loans in a total of 360 billion Lira ($576m), but only on condition that the car would be built, not in Milan, but 775km (480 miles) to the south, near Naples. In January 1968 it established a subsidiary company, Industria Napoletana Costruzioni Autoveicoli Alfa Romeo-Alfasud S.p.A. A government industrial holding company, Finmeccanica S.p.A., held a 10% minority stake in the subsidiary. A site in Pomigliano d’Arco near Naples was identified for a new manufacturing plant and construction began in April 1968.

The development team for the new model was led by Rudolf Hruska. Born in Vienna in 1915, Hruska was an Austrian engineer who had worked for Porsche during the war and was involved with the Kdf-Wagen project, which became the VW Type 1. After the war, and a brief period of internment by the Allied Forces, he moved to Merano in northern Italy where he established a Porsche dealership with Carlo Abarth, working with the ill-fated Cisitalia motor racing team.

Hruska joined Finmeccanica in 1951 where he became involved with Alfa Romeo as a consultant. He joined the Milanese automaker in 1954, but left after five years, then worked for Simca (on the 1000) and Fiat (on the 124 and 128) before returning to Milan in 1967(1). Hruska was tempted back by the opportunity to oversee a ‘clean-sheet’ new design that would owe nothing to existing models. This very much appealed to his fundamentalist, first-principles approach to automotive design. In this regard at least, the comparison with his contemporary, BMC’s Alec Issigonis, is striking.

In a 1990 interview with an Australian motoring journalist, Peter Robinson(2), Hruska described his process as follows: “When you set out to make a new product, you should start from fundamental principles. You need to decide exactly [what] it is you want to achieve. Only then should you establish the basic concepts: whether the car should have front or rear drive, where the engine is located, what [engine] layout should you adopt, how big the car should be. Today, cars are bigger, heavier and more complicated. They are contrary to what we need. Cars are for people.”

Hruska spent five months setting out the design principles for the new model. He specified that it should be no more than four metres long, the body-in-white should weigh no more than 200kg. It should carry four adults and their luggage in comfort. It would take advantage of the packaging benefits of a compact FWD drivetrain with a flat-four engine. The platform design should be flexible enough to facilitate the subsequent development of estate, coupé and roadster derivatives.

Once agreed by Alfa Romeo’s senior management, the specification was passed to Giorgetto Giugiaro’s ItalDesign studio, which had been commissioned to style the new model. Hruska and Giugiaro apparently worked well together. Allegedly, the only point of conflict concerned the boot space. Throughout his working life, Hruska habitually travelled with a bag large enough to carry ten days’ supply of fresh clothes and insisted that the new model’s boot should accommodate four such travel bags, even supplying examples to Ital Design for measurement.

Giugiaro initially complained that this was incompatible with the four-metre overall length limit, but then offered Hruska a choice between a small loss of rear legroom or space-saving (if makeshift looking) external boot hinges. True to his principles, Hruska chose the latter and called Giugiaro’s bluff, much to his dismay. Giugiaro quickly came up with three proposals, one of which was selected as the definitive design.

Technically, the new Alfa left almost nothing to be desired. The new flat-four ‘boxer’ engine, a 1,186cc 62bhp (46kW) unit was water-cooled with belt-driven overhead camshafts. It was mounted ahead of the front axle line and drove the front wheels through a four-speed manual gearbox (a five-speed came later) and equal length drive shafts. Suspension was by inclined MacPherson struts at the front and a clever torsion-beam axle with Watts linkages and a Panhard rod at the rear. The Alfasud also featured rack and pinion steering and four-wheel disc brakes, the front pair being mounted inboard. 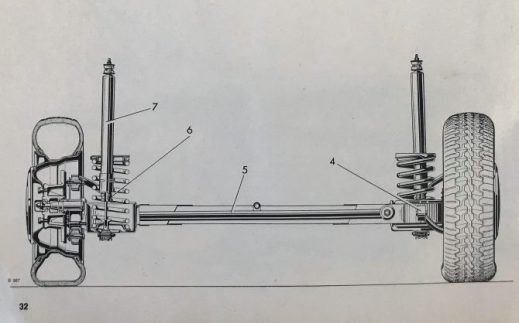 Thanks to the talent, commitment and hard work of its designers and engineers, the Alfasud went from concept to production-ready in just three years, roughly half the normal development time for new models. It was a car of great promise for its maker, and confidence was high in both Pomigliano d’Arco and Portello for its 1971 Turin motor show launch.

(1) In light of Hruska’s close involvment with the 128, Fiat was, allegedly, infuriated by his return to Alfa Romeo and tried to apply political pressure to disrupt the Alfasud project.