Although comfort-oriented big Citroëns such as the DS and CX would seem to be very suitable cars for the North American driving environment, the French manufacturer has never really been able to achieve any sustained or economically viable market penetration there. A too-thin dealer network, quality and durability levels unsuited to American driving conditions (in certain aspects), the idiosyncrasies inherent in their design concept and construction and a high price tag were the main impediments to their sales success.[1]

Citroën officially pulled out of the American market in 1972, but after their departure several enterprising souls attempted to keep putting Citroëns on American roads, sometimes without the manufacturer’s consent. CXA was one of these.

Dutchman, André Pol and Malcolm K. Langman established CXautomotive, later renamed CXA, in the nineteen eighties. Their aim was – as the name of their venture suggests – to import, market and sell the Citroën CX in the USA. Citroën would have none of it however and refused to cooperate with CXA in any way; CXA also being forbidden to have either the double chevrons or the Citroën name anywhere on their cars.

That is why in these brochure photographs you will look for the Citroën name and logo in vain; the only place where the name Citroën is briefly mentioned is in the legal credit for the French firm as owners of the patent rights to the hydropneumatic suspension system.

Since CXA was unable to acquire CXs directly from Citroën in Paris, they purchased them from dealers in Belgium and Germany. In order to be allowed to sell the cars in the USA several changes had to be made to make them comply with United States emissions and safety standards. This meant that CXA had to sacrifice two cars to be submitted for crash tests; these were performed in The Netherlands at the TNO Institute in Delft.

At the CXA workshop in Oisterwijk, new CXs were de-badged and all the necessary modifications for compliance with US federal regulations were performed; unsurprisingly only the 2.5 litre engined versions of the CX (GTi, Prestige and 25 Break/Familiale) were offered.

CXA customers were able to specify equipment and colours that were not normally available through the official Citroën dealer network: one could order a Prestige in white or red for example, and have a sliding sunroof fitted to it. The brochure also shows a Familiale with leather upholstery. 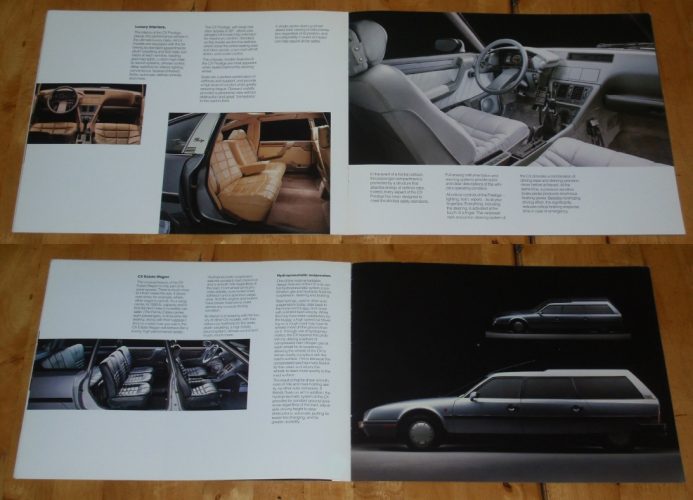 The showroom of CXA in Manhattan; larger than the erstwhile official New York Citroën showroom, managed to get roughly 2000 CXAs sold over a period of five years. Among its customers were famous names such as Carlos Santana, Francis Ford Coppola and Whitney Houston.

The second brochure is a Japanese-market item, also from the late eighties. Here too only 2.5 litre versions are presented, among which a Prestige in an unusual specification: no vinyl roof and no light alloy wheels but hubcaps from the entry-level 2.2 litre and Diesel models as sold in Europe.

In Japan too the CX, here imported by the SEIBU Group that carried some other European makes as well, would always remain a specialty car for a specific kind of customer. Even though the CX was sold only in modest numbers, it today enjoys the attention of active clubs both in the USA and Japan.

Both these brochures are not that easy to locate; neither was printed in any significant numbers, certainly nothing approaching regular CX brochures. For the CXA brochure, your best bet would be at a swap meet or classic car show in The Netherlands due to the Dutch origins of CXA, in addition to the considerable popularity of the Citroën make in The Netherlands.

[1] Another factor being that Citroën’s oleopneumatic suspended offerings fell foul of US bumper/light height regulations. (ED)

33 thoughts on “Name Lost in Translation”