A large chair does not make a king*, as the Korean carmaker discovered.

The brand name SsangYong is derived from Oriental legend and means Two Dragons. It stems from a fable about two dragons who longed to fly to heaven. In order to be able to embark on that journey however, they each required a magical gemstone – but they had only been given one to share between them. For a thousand years each insisted the other go first but to no avail. Moved by their altruism, a heavenly king sent down another magical gemstone so that at long last they could complete their heavenly journey together.

The Pyeongtaek-based car builder formed a technical alliance with Mercedes-Benz in 1991, the first vehicle benefiting from this agreement being the Musso SUV that debuted in 1993, its engines being Mercedes-Benz units produced in Korea under license. Over time SsangYong has not shied away from presenting, shall we say, visually unorthodox products – look no further than the Korando or Rodius as examples of this approach.

For its first and up to now, last entry in the executive class however, the Korean company took a very different path, the ambitious Chairman using many more Mercedes-Benz elements than simply power units. For in addition to the above, it was styled under the direction of seasoned veteran Mercedes-Benz designer Josef Gallitzendörfer.

Development of the Chairman, introduced in 1997, started four years before; in essence SsangYong’s new executive car was a heavily re-engineered and rebodied Mercedes-Benz W124 – platform, suspension, steering, brakes and engine were all sourced from the then recently retired Sindelfingen bestseller. 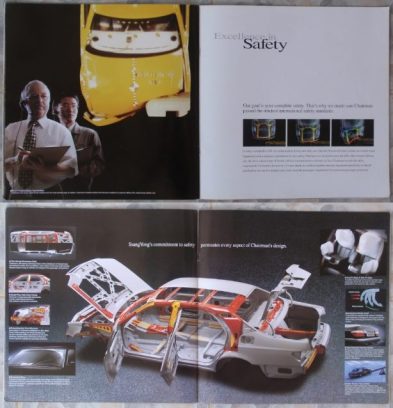 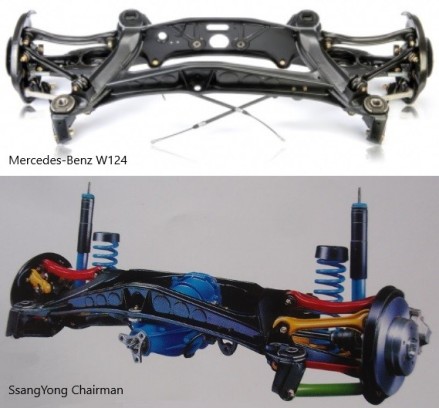 Powered by the 3.2 litre M104 inline six with 24 valves delivering 220 hp, anyone inspecting the Chairman was left in no doubt about its connection to the famous Stuttgart carmaker. Apart from a few minor non-Teutonic flourishes such as the font used for the badges and the small crests in the corner of each rear side window, its appearance was clean and disciplined of line, and contained several obvious styling cues referring back to the products of the three-pointed star. That Josef Gallitzendörfer was enlisted to supervise the design process was only fitting, since he was also one of the main driving forces behind the appearance of the W124.

The comprehensive 36-page brochure from 1998 makes no secret of the Mercedes-Benz connection of course and on the contrary refers to it many times, starting on the cover. Interestingly, some photos in the brochure show a duo, each time consisting of a middle-aged (presumably German but certainly European) engineer or designer with his Korean apprentice (clearly several years his junior) in a ‘watch and learn’ pose behind him, imbuing a faint air of neo-colonialism.

Although the Chairman was based on the W124, its dimensions were as near as makes no difference to the S-class realm. And should a length of 199 inches not be enough, a long wheelbase version stretched by twelve inches was also available.

SsangYong and Mercedes-Benz agreed that the Chairman would only be offered in the domestic Korean market and a few other selected areas among which were Australia, Russia and a few Eastern European countries. Outside of Korea however, sales of the Chairman were miniscule, partly due to a lack of SsangYong dealerships. An effort was made to tackle this problem by badging the car as the Daewoo Chairman in some markets but this did not help much. A high price and lack of brand recognition in this segment only exacerbated the problem.

The Chairman was updated in 2005 when it received smaller headlights that were presumably meant to refer to the Mercedes-Benz W210 but also recalled the controversial 1995 Ford Scorpio facelift. Six years later the car was restyled again with headlights that now appeared to be a halfway house between the C219 Mercedes CLS and the Porsche 996’s items.

The original Chairman was renamed Chairman H in 2008 owing to the addition of the all-new Chairman W (also sold as the Roewe 850 in China) to the line up. The Chairman H would continue to be produced until 2014 alongside the Chairman W, whose production ceased in 2017. The Chairman W also utilised various Mercedes-Benz elements but in this case borrowed from the more recent W211 and W220 models. Its performance in the marketplace remained disappointing however; SsangYong was acquired by Mahindra & Mahindra in 2011 and filed for bankruptcy in December of 2020, its future uncertain.

13 thoughts on “Please Be Seated”