Exiles off main street – a conclusion.

Returning to our brief review of the automotive afterlife, we pop across the channel to arrive in the United Kingdom. Bidding here is opened by the Austin Maestro (1982-1994) which ended its days in China as the Yema SQJ6450 in 2010, resulting in sixteen years of continued production in exile. Yema also sold the F12 until 2014 which did use the old Maestro/Montego platform but with a totally different body and interior.

Vauxhall’s Victor FE (1972-1978) enjoyed a lengthy career continuation in India as the Hindustan Contessa – the Hindustan assembly lines only delivered the last Contessa in 2002, with a score of twenty-four years the result.

Now to the big guns: as the Paykan, the Hillman Hunter (1966-79) remained available in Iran until 2005, the pick-up version (the Bardo) even as late as 2015. This means an impressive exile score of either twenty-six or thirty-six years.

No matter, because both Paykans are handily beaten by India’s Hindustan Ambassador, née Morris Oxford III (1956-1960). It was not until 2014 that production finally ground to a halt resulting in a mind-boggling period of production in exile: no less than fifty-four years. By the way, the British Fullbore company attempted to re-introduce the Oxford III in the UK during the 1990s by importing Hindustan Ambassadors and modifying them where necessary or required by law. This was not a success.

We should not forget Italy of course; it will likely not surprise many readers that all of the candidates carry the FIAT name. Barely clearing the ten-year hurdle with thirteen years of exile survival is the 127 (1971-1983) which ended up in Argentina and, renamed 147 along the way, was produced there until 1996.That makes for an exile score of thirteen years.

The old rear-engined 600 (1955-1969) found refuge in the Eastern bloc as the Zastava 750/850 and held out until 1985 earning it a score of sixteen years. Fiat’s first generation Uno (1983-1995) was built in its final guise under the name Uno Grazie Mille in Brazil until 2013, totalling eighteen years. Next up in the Fiat parade is the tiny 126 (1972-1980) that, affectionally named Maluch (toddler) in Poland, was produced there until september 2000 which means twenty years of life extension outside of Italy. 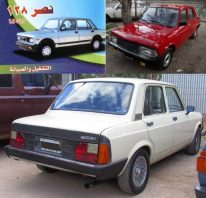 In Serbia the very last Zastava Skala 55 was completed in 2008. It had of course started life as the Fiat 128 (1969-1985). A quick calculation shows that the 128 registers an impressive twenty-three years on the exile scale. The 131 Mirafiori (1974-1985) is, perhaps undeservedly, a bit of a forgotten Fiat but it too enjoyed a extended afterlife ultimately ending its days in Ethiopia. Holland Car, a Dutch-Ethiopian joint venture, produced the now DOCC named old Fiat using CKD kits in Adis Ababa until 2010 – a score of twenty-five years being the result.

We move to India for another high-scoring Fiat: the 1100D (1962-1969). First as the Fiat 1100 Delight but later as the better known Premier Padmini, it was to the Indian taxi trade what the Austin FX4 was to their British counterparts. It was not until the year 2000 that the final Padmini rolled out of the factory – having enjoyed an exile existence of thirty-one years.

Trumping all these is the Fiat 124 (1966-1974); built in India (Premier 118NE) until 2001 and Turkey (Tofas Serçe) until 2004. However, Egypt would be its last known production location,  production there continuing at least until 2015. Currently it is no longer listed on the Lada Egypt website, so it appears to have been discontinued sometime between 2015 and 2020 – the 124’s minimum exile score thus standing at a towering forty-one years but might be higher still.

Our final country may be a surprise to some: Japan. And yet, keeping in mind the proven durability of most Japanese cars and the fact that they usually enjoyed relatively short production spans in their home country it starts to explain why some score very well on the exile scale.

The unassuming Nissan Sentra B13 (1989-1994) found refuge in Mexico where it continued to be produced as the Nissan Tsuru until 2017 – a strong score of twenty-three years its reward. It’s Mazda again for Japan’s number three: the 121 DA (1986-1991) is still in production in Iran as the Saipa 111 at the time of this writing, therefore its exile score is a sizeable twenty-nine years and counting.

Suzuki has another horse in this race – the CA71 Alto (1984-88). In Pakistan it continued to be built as the Suzuki Mehran until 2019 earning it a 31-year stay of execution abroad. Impressive as this is, it is soundly beaten by the Nissan Junior Pickup (1970-1982) which is also still in production in Iran, built by Zamyad under the model name Z24. This means it scores thirty-nine years of production in exile – and counting.

So, to wrap up, we have a top three in the Morris Oxford Series III, the Fiat 124 and the Nissan Junior Pickup respectively, but as the latter is still being produced, the order could change in the future. One thing we can say however with a reasonable amount of confidence is that the likelihood of any future additions to threaten the existing order seems at best, vanishingly small – the industry has changed too much for that.