The 2006 Citroën C-Triomphe didn’t quite live up to its billing.

Editor’s note: This article was first published in Driven to Write on 24 October 2017. Owing to the poor quality of the original images, stock photos have been used.

PSA announced this particular iteration of their C-segment contender in 2004, a car which replaced the unloved and visually unimpressive Xsara model line. The C4, believed to have been the styling work of Donato Coco and Bertrand Rapatel under the supervision of Jean-Pierre Ploué marked the beginning of a stylistic renaissance at Citroën’s Vélizy design centre. Au revoir to the creative torpidity which characterised the Jacques Calvet era, welcome back creativity. Theoretically at least.

Now the C4 hatchback wasn’t a bad effort, even if it fell some way short of the class-leading Focus, in dynamic terms anyway. It certainly presented a more Citroënesque face to the world than the one the marque had been permitted for some considerable time, even if it probably suffered from as many durability-related issues as its ungainly Sochaux-built Peugeot 307 platform-mate.

Sold in most markets as either a five or three-door hatchback, the Mulhouse-assembled C4 became a fixture in the upper regions of the European sales charts and a regular sight on our roads, aided by the Cannes Lion winning Euro-RSCG-created transformer TV commercials. Today’s subject however remains more of an outlier within the model hierarchy, the lesser-spotted C4 Sedan, or C-Triomphe, as it was otherwise known.

Built at PSA’s Argentinian production facility and aimed at the South American, Southern European and Chinese markets, the C4 Sedan/ C-Triomphe offered an alternative proposition not only in obvious stylistic terms, but also in overall dimensions. 510 mm longer overall, with an extra 100 mm between the wheels, the sedan’s extra length was a nod to Chinese market tastes, as was the new name – the C4 designation having decidedly unpalatable connotations in China.

The visible bodywork changes are evident aft of the centre pillar, with elongated rear doors, a heavily revised rear canopy and the provision of a separate boot. But it is at the tail where the sedan makes its strongest visual statement. Clearly an attempt to reflect styling themes explored to greater account on the range-topping C6 saloon, the expansive boomerang-shaped rear lamps arc luxuriantly over the rear deck, if not as dramatically as those of the flagship model.

The effect it creates however is a slightly incongruous one, the C-Triomphe lacking the proportions or requisite gravitas to wear it in any manner other than a slightly self-conscious one. So while the styling cannot be considered a ringing success, it appears to have had something of a precedent in Ford’s 1993 Synthesis concept – a design which reprised themes explored with a good deal more success in Ghia’s Focus showcar of the previous year – both vehicles employing softly curved forms, a glassy six-light canopy, and a rounded tail.

But Citroën didn’t stop with the C-Triomphe, employing another shuffling of the platform matrix to bring about the 2009 C-Quatrè[]. Employing the shorter wheelbase hatchback platform, this shake of the can resulted in a 328 mm longer car overall. Styled in a more contemporary idiom than that of the more classical C-Triomphe, a derivation of this car remains in production at the time of writing with Dongfeng Peugeot-Citroën in China. 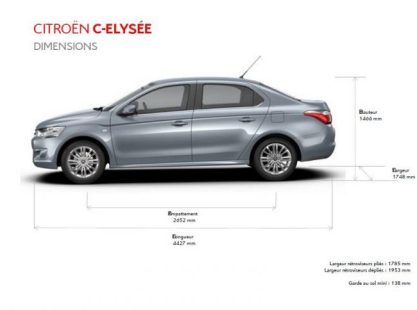 But it doesn’t end there. Citroën currently sells the Spanish-built C-Elysée saloon[1] in selected European, South American and North African markets in addition of course to China, where it is also assembled. In fact, the sheer fecundity of three volume Citroëns available worldwide turns out not only to be somewhat bewildering but really ought to warrant deeper examination.

One of the sternest tests a car stylist faces is to convincingly transform a car designed as a hatchback into a three volume saloon. It can be done and done well, but the C-Triomphe, while not particularly egregious, fails to be harmonious to behold – showroom death I would contend. Judging by the numbers viewed on the (Southern Spanish) roads, the C4 Sedan/ C-Triomphe appears to have been decidedly minority fare. Even the current C-Elysée model appears to be fading fast.

In fact, one struggles to think of a traditionally executed three volume Citroën that could be said to have been a visual (or sales) success. Perhaps the double chevron should simply avoid the format. It is clearly not their metier.

[1] The C-Elysée has been withdrawn from many European markets, owing to its relative age and changing customer tastes. It remains on sale in China however.

The C-Triomphe was also marketed as the C4 Pallas or Sedan in certain European and South American markets. In the Chinese market, it would appear that the 2012 C4L was its replacement. This car, designed in China, was also sold in South American and Russian market for a time. It was not offered in Europe