First impressions are very positive, but trouble lies ahead. 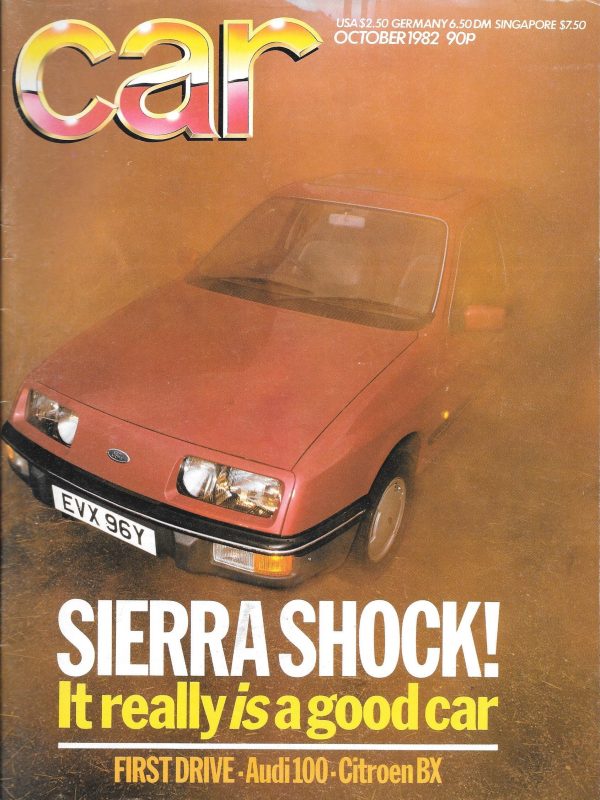 The UK automotive press were inordinately impressed by the apparent sophistication of the new Sierra. Car Magazine featured it on the cover of its October 1982 issue with the headline, “Sierra Shock! It really is a good car.” The magazine devoted a six-page feature to the Sierra including an analysis of the design by Steve Cropley, driving impressions from Mel Nichols and an interview with Bob Lutz, Ford Europe’s (former) chairman, who had recently been promoted and returned to Dearborn.

Cropley’s opening remarks set the tone for his piece: “If ever a car… deserved a complete break from the cloying, boring image of the ubiquitous Ford ‘nail’, this Sierra does. It is wholly different; wholly better.” He continued thus: “It is good enough to be compared with the new Audi 100, and to be mentioned in the same conversation as a Mercedes-Benz W123.(1)“ The eulogy continued: “Never again will a car maker be able to style a car for effect rather than efficiency, to produce a car with an indifferent ride because ‘the public won’t notice’ or to skimp on noise / vibration suppression, on refinement of any kind, because Ford’s Sierra, still intended as transport for those with no interest in car design, has been designed with an eye on the standards of Mercedes-Benz and BMW.”

As the piece progressed, however, Cropley’s tone became somewhat more nuanced: “it is important not to see [the Sierra] as a true rule-breaker. Its drag factor of 0.34 has already been bettered by the new Audi 100 and is about to be matched by the middle-model [Citroën] BX. It has no flush glass (that’s in the Audi), lacks a particularly progressive suspension design (that’s in the Citroën), nor does it bristle with new materials. Rather, it’s a modern refinement of established principles.” That last phrase is quite telling and sounds like one that might in the past have been used to describe any new Cortina.

Regarding the styling, Cropley wrote that “Cortina buyers are likely to be shocked at first by the decision of the Ford creators to neglect their chance for a purely imposing shape in favour of an efficient one. The sheer rounded sleekness of the car will frighten some of them off.” Ford’s senior designer, Patrick le Quement, justified the radical shape by saying that “It was a matter of making the break, or letting someone else do it.” The Sierra’s body was, according to Cropley, “designed for maximum strength, using minimum materials” and “the result is a lighter car (by 100-150 lbs [45-68 kgs] compared with corresponding Cortina models).” Weight was saved by a “reduction in complexity (there are 75 fewer parts in the Sierra’s body than [in the] Cortina’s.)”

The Sierra’s suspension was actually a largely conventional set-up with MacPherson struts at the front and semi-trailing arms at the rear, but Ford was very proud of the effort its engineers had put into refining the details of the layout to optimise the ride and handling compromise.

Regarding the decision to retain rear-wheel-drive for the Sierra, Cropley suggested that “Ford publicists have done some of their best work” by pointing out that “rear drive cars can have lower bonnets (which benefits styling and aerodynamics), they can run a bigger range of engines (the Sierra has engines from 1.3 litres to 2.8 litres), there are handling benefits (many faster drivers prefer the behaviour of rwd cars). Ford also claim that buyers ‘downsizing’ from bigger cars are more ready to accept rear-drive than front.”

Having trotted out Ford’s PR spin, Cropley did finally get to the true rationale behind the decision to retain RWD: “there can be little doubt that it’s far, far cheaper to stick with rwd for a new model when you’re using an established range of engines and gearboxes, minimally changed. In fact, if it costs £660m to build a new range of cars without the engines and drive layout changed, its downright terrifying to think what it might cost to go the transverse front-wheel-drive route, using new engines, as GM have done with the Vauxhall Cavalier.”

In that paragraph, buried in the body-text of the piece is, I would contend, the fundamental reason for Ford’s decision to stick to rear-wheel-drive for the Sierra: simply, the cost. It might not have mattered if the Cortina’s engines had been class-leading, but they were some way off the pace(2). Was Ford’s brave new car about to be undone by its old-school drivetrains?

What about the Sierra’s driving experience? Mel Nichols’ initial impressions of its abilities over twisting Sardinian hill roads were very positive: “On the handling front, then, real ability. And for ride and comfort, genuine quality.” Nichols continued: “Hallelujah! – the Sierra is light years away from its miserable predecessor. The great unwashed, if you’ll excuse the condescension, have been given a decent Ford at last. The car feels fluid, mature, competent. The fundamental quality of the Sierra’s dynamics seems to come through from the moment the wheels start rolling.”

However, then some caveats emerge: “But if you’re driving a 2.0 litre Sierra, another impression also comes through: the carried-over single ohc Cortina engine feels rough, old, crude and out of place in a car that is otherwise patently refined. Powerplant and chassis are not in harmony, and the Sierra 2.0 is robbed of a feeling of overall quality. It doesn’t even have the strength to go with its roughness: low and mid-range isn’t much better than the 1.6.” Nichols described the smaller engine as “quite sweet, and since the Sierra is quite light, the performance loss is not worth worrying about.”

It was with the 2.3-litre V6, however, another carry-over engine, that “the Sierra comes fully into its own. Here’s an engine that not only has a good performance spread but revs decently and willingly and is smooth and quiet with it. It isn’t a lovely new engine, but it does blend well with the rest of the car.” Disappointingly, though, “The new five-speed gearbox… works well enough without being anything to write home about.”

Despite the reservations expressed concerning the drivetrains, the overall assessment was that the new Sierra was “a bloody good car.” Overall, Ford cannot have been disappointed by the reception Car Magazine gave to its new model, although might have felt some disquiet about the criticisms of the carry-over engines and new five-speed gearbox.

Just three months later, however, the Sierra faced its arch-rival, the new Cavalier, in a Car Magazine Giant Test(3). The cars brought to the launch event in Sardinia had all been top-line Ghia variants, but both the Sierra and Cavalier UK test cars were in low-line 1.6L trim. This was most apparent on the Sierra where, instead of the Ghia’s wide dual headlamps and fully faired-in front end, there were single rectangular lamps and a slatted front grille which was described as “shovel-nosed.” Inside, visibility was “adversely affected” by the thick window frames with their rounded corners and the sparse facia looked “a little bare” compared with more upmarket versions.

At high speed, the Cavalier was “arrow straight on a motorway, even in conditions of gusting sidewind.” The Sierra, however, demonstrated a “slight waywardness [that was] mildly annoying.” There were also concerns about the Ford’s on-the-limit handling, where “initial gentle understeer turns with increasing speed into the other thing [oversteer]…and any lateness with opposite lock can set the car very sideways indeed.” In contrast, the Cavalier “cannot be provoked into any sign of misbehaviour [and is] a model of consistency.”

Car’s overall conclusion was that “The Sierra is not a force which sweeps all before it. It is very roomy, it rides exceptionally well, it is decently quick and economical and it handles pleasantly except for that gentle sting in the tail. Balance all that against the Cavalier which is both faster and more economical, which is a more than adequately comfortable four-seater, and whose handling is a model of consistency with no visible vice whatever… Our own balance inclines us towards the Cavalier.”

So, first blood to General Motors, which must have been a bitter disappointment to Ford, given the investment it had made and the Sierra’s very positive initial reception. But that would be just the start of the Sierra’s difficulties.

The story of the Sierra concludes shortly in Part Three of this series.

(1) Hardly a stunning endorsement as the W123, while undoubtedly a fine car, was already seven years old at this point.

(2) The base Sierra was saddled with an old 1.3-litre engine that produced a feeble 60bhp and was mated to an archaic four-speed gearbox.

(3) The third contender was the Volkswagen Passat Mk2, which finished last in the comparison.