In the run up to the Sierra’s launch in September 1982, the external design had been previewed with the Probe concept, aimed at lessening the shock of the new. However, few observers believed Ford would put anything so radical into series production, a perception the automotive and general press did little to discourage. When Sierra arrived in the showrooms however, the stunned disbelief was palpable.

Additionally, there remained large stockpiles of unsold Cortinas, which required significant discounting to clear. This gave wavering customers an opt-out, which many gratefully accepted, delighted by the opportunity to acquire a Cortina Ghia for the same price as a Sierra L. The lack of a three-volume saloon bodystyle was another difficulty in a UK market that remained deeply conservative. Ford’s strategists believed that the Sierra’s ‘bustle-back’ appearance would provide the visual illusion of a saloon silhouette, satisfying such buyers, but this would prove to be mistaken.

In service, the Sierra would prove less durable than the market expected. Fleet managers reported finding them surprisingly prone to serious structural damage even after comparatively minor impacts, and early models were also said to be rust-prone. The relative fragility of the car may have been related to the lightness of its construction, something that Ford had heralded at launch.

There were also some build-related issues with early Sierras, and Ford’s aggressive cost controls ensured that components like shock-absorbers seemed to deteriorate more quickly than normal, making the cars feel decidedly ‘used’ and ‘baggy’. This was noticed by fleet managers who found Sierras needed more service attention than its rival GM product, which proved to be a tougher and more durable car over high mileages. Moreover, most of the engines fitted to the Sierra were regarded as no match for GM power units, being somewhat rough and lacking in refinement.

Quite apart from these issues, the elephant in the room remained the perception surrounding the Sierra’s controversial styling. The higher-specification models with their flush wheel covers, fully faired-in front end and large dual rectangular light units looked rather futuristic, but the low-line models with smaller headlamps and a three-slat grille looked very plain, especially the base model where the grille was left in unpainted grey textured plastic. The UK market in particular seemed to struggle with the Sierra’s design, although it was better received in continental Europe.

The Sierra quickly acquired an unflattering jellymould nickname in the UK press and faced significant resistance from potential buyers there and in other conservative markets, many of whom were attracted instead to the smart new Opel Ascona C and its Vauxhall Cavalier equivalent. Moreover, the Ascona/ Cavalier were available in both four-door saloon and five-door hatchback variants, making them attractive to a wider range of buyers than the hatchback (and estate) only Sierra.

Even the sporting XR4i three-door version, with its unique rear side window arrangement(1) and outlandish looking double rear wing, could not improve the Sierra’s image amongst prospective customers. Moreover, at 2.8 litres, while fine for a halo model, the initial lack of a smaller engined performance model handed more sales to its GM rival. In the UK, the Cavalier outsold the Sierra in 1984 and 1985, an unprecedented situation that proved intolerable for Ford.

In September 1983, Ford launched the Orion. This was simply a re-engineered version of the Escort Mk3 five-door with a new rear end incorporating wider C-pillars instead of the Escort’s rear quarter windows, a fixed rear screen and separate boot. The Orion was a quite pleasant looking car, although the heavily curved rear screen seemed to be rather at odds with the linear styling elsewhere. It was marketed to appeal to existing Cortina(2) owners, and although perceived to be smaller and rather staid in comparison with the Ascona C / Cavalier Mk2, it sold steadily, mainly to older, more conservative buyers.

The Sierra’s aerodynamics(3) concealed a potentially serious flaw that would become apparent when the car took to public roads. There were reports that the shape lacked yaw (directional) stability at speed in crosswinds, making it difficult to maintain in a straight line(4). In July 1983, Neil Kinnock, then leader of the opposition UK Labour Party, was involved in a serious accident in his new Sierra, when the car left the road and somersaulted over a crash barrier. Kinnock was not seriously hurt but the car was a write-off and the incident attracted widespread press coverage. While it cannot be said with certainty that aerodynamic instability was a contributory factor in this accident, the ensuing press speculation was most unhelpful for the Sierra’s prospects.

Without explicitly acknowledging the seriousness of the issue, in 1985 Ford fitted small aerodynamic strakes behind the rear three-quarter windows to manage airflow and limit the formation of unstable vortices which were alleged to be the cause of the instability(5). At the same time, the Sierra received a minor facelift whereby the three-slat grille was deleted and all models received the flush front end. The base model was also discontinued. This was merely a holding exercise, however. 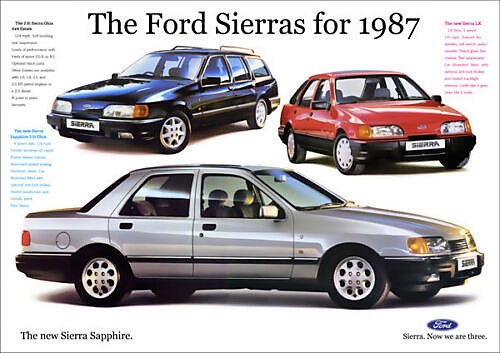 A major redesign for the Sierra had been ordered, together with the development of a three-box booted version. This came to fruition in September 1987 with the launch of the Sierra Mk2. The revised car was now also available as a saloon, called the Sierra Sapphire in the UK. The front end of all models was revised to have wider headlamps with outboard indicators that wrapped around into the front wings. This eliminated the slightly awkward visible panel gap that had surrounded the fairing panel/grille on the outgoing model and made the car look wider and lower. At the rear, wider but slimmer rear light clusters were used.

The biggest and most expensive change was quite subtle, but highly effective. The radii of all the corners in the door windows was reduced to make them look sharper. This had the effect of making the glass area look larger and the frames slimmer. A slightly larger quarter light in the C/D-pillar of the five-door completed the overhaul and transformed the appearance of the car. The aerodynamic strakes behind the rear quarter windows remained, but were more neatly incorporated into the surrounds. While Sierra was certainly due a refresh by 1987, this facelift was unusually comprehensive, suggesting a level of dissatisfaction within Ford about the early sales performance of the model.

More radically, hundreds of millions were spent on developing a three-volume saloon version. Notably, the new model had small aero strakes incorporated into the trailing edges of the C-pillars either side of the rear screen to avoid any repeat of the instability issues suffered by the early hatchback model. By mid-decade, the Sierra’s weak early UK sales were already recovering, but the new saloon, combined with the revised visual features on the hatchback, really turned the Sierra’s fortunes around, with the saloon version going on to outsell its hatchback sibling by a considerable margin.

It is a moot point as to whether the Sierra’s facelift was transformational, or whether the public had simply become more accustomed to ‘aero’ design. It was probably a combination of both factors but, in any event, the facelifted car went on to be a great success and remained on the market for a further six years before being replaced by the Mondeo in 1993.

A total of more than 2.7 million Sierras were built worldwide between 1982 and 1993. Most were built in the UK, Germany and Belgium, but they were also produced in Argentina, Venezuela, New Zealand and South Africa, where a 5.0 litre V8 version called the XR8 was offered.

It might be tempting to dismiss the Sierra as something of a chimera, with its traditional RWD layout hidden beneath its radical exterior styling. That would, however, be unjust. Its depth of engineering (engines apart), build quality and interior appointments represented a significant advance over the Cortina and, in its more mature Mk2 from, the Sierra deservedly sold very strongly.

When Ford came to replace the Sierra, the company finally embraced front-wheel-drive and offered a full range of bodystyles; saloon, hatchback and estate from the outset. The company’s flirtation with radical ‘aero’ styling was over and the new Mondeo was a remarkably bland looking car, to the extent that it could have come from any number of European or even Japanese manufacturers. It was of course, a fine car and was deservedly a great success.

That said, while the first Mondeo was excellently engineered and dynamically brilliant, it wasn’t a particularly memorable car. The Sierra, on the other hand, was not only a trailblazer in stylistic terms, but was by far the more significant. Hence, we might argue, it was the more important car.

(1) The XR4i had split rear side windows separated by an additional roof pillar rather than the single (overly?) long glass that featured on the regular three-door version and which, to some eyes at least, looked rather awkward.

(2) Although not identical, the Orion’s tail lights looked very similar in size, shape and layout to those of the final Cortina, the so-called Cortina ’80. This was hardly coincidental

(3) The Cd was claimed to be 0.34, which was competitive but not outstanding and was bettered by other less overtly aerodynamic cars such as the new Citroen BX, for which the claimed Cd was 0.33.

(4) Assuming Ford’s testing had not already uncovered the issue, which stretches credibility somewhat, given the extensive testing the car would have undergone.

(5) Might one conclude therefore that the Sierra’s was signed off for production with a known stability issue?