In search of snow monsters…

Lately, more light has been cast regarding the development of that still beloved creature, Škoda’s Yeti. Before the K-named cars were but a twinkle in Stefani’s eye, the Roomster’s replacement came in for plenty of conducted and rather surprising concepts with which we unravel, today.

Against the common manufacturer’s grain, Škoda allowed themselves a frisson of comedy. In the early years of the millennium, Thomas Ingenlath (now of Polestar, nee-Volvo and at the time, Škoda), donned mountain boots and coat, taking to the Palexpo stage to announce the Yeti Concept. Hardly conducive to operating a small car’s pedals, he ditched the robust luggers for more appropriate apparel, neatly depositing the unwanted garments through the practical folding tailgate. Inglenath’s point being that if you’re not out there looking for Abominable Snowmen, why the need for huge off-roaders? The Yeti Concepts were small, almost cuddly, wholly non combative. In fact, they were the very opposite of abominable.

With its ice blue and silver colour scheme, the Yeti Concept’s interior positively screamed ‘outdoors’ with almost every hand control capable of being operated by a gloved hand. Even the normally dash based GPS system was demountable for mobile use, most handy for walking through snowstorms.

Keeping one’s vision clear when driving, the solitary wiper which when not in use across the elongated and roof integrated screen, would park in the shadow of the right A-pillar. Painted black and continuing as aesthetic roof rails, the darkened edge formed a definitive strip between the front and side glass. No mention is made of the potential blind spots, perhaps large enough for a giant snow creature to hide within. If the front screen was angled moderately, the rear ended abruptly with Škoda’s engineers citing two responsible theories – improved internal roominess alongside a reduced effect from the celestial rays. The cabin would remain cool until the users felt otherwise.

That rear end derived more clever packaging. The glass hatch as Ingenlath demonstrated, pivoted à la P38A. The lower section combined a split inner and outer skin, the former keeping the weather out. The outer lower section folded down to provide a shelf for storing a couple of mountain bikes or a specially designed aluminium box. Other uses included tying one’s laces or perhaps offering the large snow-dwelling chap a lift, although it’s doubtful he’d fit inside.

Leaving the Geneva crowds and journalists somewhat excited, the Yeti Concept then moved onto Frankfurt, along with a new guise. The ice blue had melted into a sunset orange along with a new rear end. What could abominably be referred to as a landaulet, Škoda opted for “an unconventional pick-up.”

The hard top could be removed, perfect for observing big game or, more prosaically, easy access under the Golden Arches. The rear canvas could remain in place, shading rear passengers from the relentless sun or folded away (by hand) for a more presidential feel. Or indeed removed altogether, which when combined with flattening the rear seats made for a two metre long pick-up bed. With the tailgate folded, a floor cover would automatically deploy. A manual switch was deftly hidden within the O of Škoda to the rear. 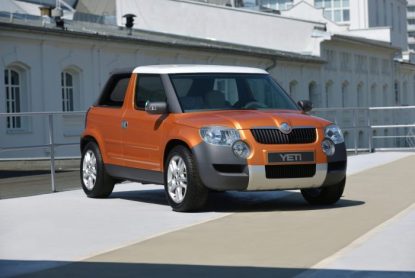 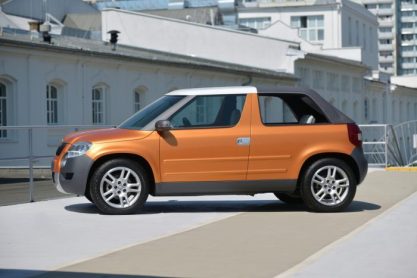 Incredible as it may seem, just thirteen short years ago the SUV was not the choice of the masses. The Škoda Yeti, at launch certainly, was deemed a left-field choice yet in its eight-year, single facelift tenure shifted over 630,000 units. German magazine, Auto Strassenverkehr wanted the Yeti launched immediately, as in the Concept. Even tousle haired motormouth, J. Clarkson is alleged to have cited the Yeti as the best car in the world.

The Yeti Concepts brought about squarer wheel arches that continue on today’s K-named brethren. The Concept also introduced the deletion of the badge to the rear, replaced by a spelled-out name, another continuing tradition. Embossing was fine for such niche projects, but the notion was deemed unfeasible for production.

With both Concepts being based on the then current Fabia chassis, the vocal encouragement Škoda’s management heard saw a shift of focus to that of the Octavia, allowing for more generous proportions alongside the ultra-lucrative 4×4 versions. Heading slightly off-piste, Škoda once more opened up their more playful side in 2014 with the Yeti Xtreme Concept.

Revealed at the ever-popular Austrian GTi Festival at Worthersee, the chunky looks and eye-popping colours had returned. Flared wheel arches, knobbly tyres, under vehicle protection and muscular, if still not that aggressive bumpers announced a more rally-based theme. Inside, the Xtreme came with Recaro racing seats with harnesses with for the more adventurous, fire extinguisher, belt cutter, sand (or snow?) shovel, metal recovery tracks and not forgetting the ubiquitous Thermos flask. The contents of which are not specified; you may have thought to pack a stiff drink should you actually witness a Yeti.

Maintaining a stance in the world of make believe, Škoda looked into the possibilities of creating a genuine pick-up around 2012. Dipping heavily into the Wolfsburg parts bins, the Yeti Pick-up was a hybrid mix. With a production ready Yeti front, the rear was pure Golf Caddy territory – axle, suspension and floorpan. Given four-wheel drive, the rapidly approaching five-meter vehicle was given an eventual thumbs down by management, keen to concentrate further Yeti expansion to what was most definitely by then an exploding genre.

An extension did occur, though. Gazing longingly to the East, the Yeti wheelbase gained an extra 60mm over the European version. 2013 saw the Chinese only market version garner favourable sales figures. This variant also sired the Xtreme, mentioned above.

The indomitable rise of the utility brand saw Škoda eventually allowing the Yeti to return to the wilderness, without a true and direct replacement in 2017. Size-wise, the Kamiq nudges closely whereas in the Czech brand’s output, the Yeti’s place was taken by the Karoq. The Kodiaq being the only version that a snow creature may reasonably fit inside.

One cannot blame Škoda for jumping aboard the SUV money ship, but wishing for a little more boldness and playfulness, well, that’s a bit like searching for mythical creatures.