Sounds odd, doesn’t it? And so it should! Who would’ve thought the thuggish American grey squirrel could do some good?

Artwork has been around since man first walked the earth, from those basic but enigmatic cave paintings through innumerable differing themes, spheres and periods. Prior to the automobile entering the scene, the largest canvas one could expect to become embellished by a more detailed approach might have been a carriage, steam engine, a wagon or the mighty locomotive. With these large expanses to adorn, you could really personalise, promote your product.

JJ Deal of Janesville, Michigan was the producer of fine wagons, carriages and buggies powered by natural horsepower. From 1845 Deal swiftly gained a reputation for building not only quality products but also a highly detailed paint finish. Deal’s Chief Striper was a fellow named Andrew Mack. A perfectionist, Mack was never completely satisfied with the quality or performance of his paints and brushes whilst working at Deal, seeking better products and methods in which to END_OF_DOCUMENT_TOKEN_TO_BE_REPLACED

If this sounds too shady for you, best head to Practical Housekeeping, pronto. This is very blue.

Skilfully avoiding the TV new years sales adverts by heading for the internet, I found a Chevrolet Bel Air for sale. The price and to be honest the car, were immaterial; the colour on the other hand had me transfixed. What turned out to be called Larkspur Blue led me to END_OF_DOCUMENT_TOKEN_TO_BE_REPLACED

Driven to Write’s accidental tourist discovers an unusual way to amuse himself on holiday.

Following a recent sojourn back in Ireland, your correspondent has pitched up in the Costa del Sol for a well-merited change of scenery – and climate. But given that I appear to have forgotten how to behave on holiday, how is a Driven to Writer to spend his downtime, other than to END_OF_DOCUMENT_TOKEN_TO_BE_REPLACED

It’s understandable that haircuts and trouser bottoms and patterns date, and what seemed really smart to you once, now sits embarrassingly at the back of a cupboard because you’re too ashamed even to take it to the charity shop. But it’s odder that something as basic as a colour can date. There aren’t that many colours, or there are infinite colours depending on how you look at it, but either way how can something that seemed so agreeable to you once, suddenly (and it often is sudden) become so jarringly dated?

One explanation is association – maybe you fell in love with the purple colour of Eric Clapton’s loon pants when he was in Cream (no, I didn’t since you ask) so painted your bedroom walls that colour. Your parents have kept it like that ever since you left home 40 odd years ago and they wonder why you END_OF_DOCUMENT_TOKEN_TO_BE_REPLACED

We look at 2-Tone, refuge of the indecisive.

Starting on a pedantic note, I use the term ‘two-tone’, knowing full well that, like the term ‘colour coding’, its use in regard to car painting is usually incorrect. A tone is technically a greyer, less colourful, version of a single colour. Frequently, cars described as ‘two-tone’ are, more correctly, ‘two-hue’. Nevertheless, let’s stick to the generally accepted vocabulary.

I became aware of two-tone, as a child of maybe four. My Dad had a dark green Mark VII Jaguar which, one day, returned from the garage with light green flashes down either side – I’ve recaptured this crudely on the attached photo. END_OF_DOCUMENT_TOKEN_TO_BE_REPLACED

Hyundai’s colour palette for the i10 has been enthusiastically received in my corner of Europe.

Here are as many as I can find. The boring silver is not a default for i10 customers. This one is non-metallic grey, not seen since the first Audi TT.

END_OF_DOCUMENT_TOKEN_TO_BE_REPLACED

I mentioned mid-range colours earlier. Here’s what I meant. Sorry, it’s another Ford. Down the road there parked one in goldy browny grey too.

Is this colour available in the UK? A similar colour appeared on Ghia Mondeo Mk2s and on a special edition Ka Mk1.

As an aside, the new Astra and newish Corsa are only appearing with lease-me colours: black, metallic grey and red. That confounds my launch colour theory.

Thought two: in a run-out period could zany colours be a cheap selling point? Is a cheerful paint colour the Fiat 500s main selling point now?

This must have been a launch colour, chosen for its eye-catching hue.

I notice mid-range colours are the ones people like least: mid-blue, mid-green, orange and bronze or caramel brown. END_OF_DOCUMENT_TOKEN_TO_BE_REPLACED

This is about colour. Toyota also offered the Yaris in a metallic mint green. Later years seldom saw such personal colours.

The Yaris is a car that I feel has been around for longer than it has. Why is that? The first one had a zany Europroduct appearance which has gone direct from fresh to “period” with no intervening awkward phase. The dusky pink looks pinkier when you END_OF_DOCUMENT_TOKEN_TO_BE_REPLACED

In Japan it’s the colour of death. In the west it suggests purity and simplicity. In a building it invokes introversion and despair. White. What’s it like on a car?

White is the new black. In recent years white has changed its social status in cars and gone from being a poverty-spec colour or the choice of Meditterraneans to being, well, just another colour actually.

END_OF_DOCUMENT_TOKEN_TO_BE_REPLACED

We’ve moaned about the dull uniformity of the world’s car parks. TTAC has some insight on the fact that opting for the boring colours is not helping you resell that car.

This is the link. “Silver and beige, the go-to colours of the 1990’s and 2000’s, have higher depreciation rates, but nothing is worse than gold. With an average depreciation of 33.9 percent, gold vehicles are dead last. Oddly, it’s the third-fastest-selling colour in the study, behind gray and black,” says the article. As it reports American data it does not say so much about black or mid-grey metallic. I imagine that a similar study would show that these colours aren’t helping protect value at this stage. There can’t be a competitive advantage to having a silver-grey or black Audi or Ford at this point. We must at this point be at peak monochrome.  END_OF_DOCUMENT_TOKEN_TO_BE_REPLACED

Our Editor craves your indulgence.

“May you live in interesting times” is the, apparently bogus, ancient Chinese curse which was, at one point, mentioned in our site introduction. It seems that 2016 is certainly shaping up as an ‘interesting’ year and, in Europe at least, many journalists are missing out on lazing on a beach, whilst their remaining colleagues have little chance to sit with their feet up embellishing stories of skateboarding gerbils in order to fill the gaps in what was, in quieter times, known as the ‘Silly Season’. END_OF_DOCUMENT_TOKEN_TO_BE_REPLACED

Some months ago I photographed a flat blue Nissan QX. Shortly after I deleted the series despite the rarity of the car. Why, Richard, why?

Despite the good lighting I could not get the forms to stand out. Tonal treatment failed as did all the other variables. That says something about that colour which makes you want to ask why Nissan offered such an anonymising shade for an already anonymous vehicle. END_OF_DOCUMENT_TOKEN_TO_BE_REPLACED

We’ve been talking a lot about red. Here’s a 2016 Mondeo in Hilti red. It’s a quite terrible photo …

….but if you had a chance to photograph a unicorn you’d take a shot, regardless if the sun was behind the unicorn and Lord Lucan was slightly in the way.

Recently, a red Fiesta was added to the DTW fleet. Is red a Marmite colour?

No actually that’s a very murky brown. I mean of course that red is one of those colours loved by some, usually a red car’s owner, and hated by others, usually their fellow road users. Red lives at the hot end of the spectrum and is seen as the colour that stimulates – the aggressive colour. As such, the red sports car is, to many, a red rag to the bull.

At one time all Formula 1 cars were painted in the colours of the country of the entrant. Red had become the racing colour of Italy following the Peking to Paris race of 1907 but with the disappearance of Lancia, Maserati, ATS, Serenissima, Tecno and others from the grids, it has become seen as the colour of Ferrari who, despite the use of British Racing Green by Jaguar and the short-lived Lotus Racing was, until Mercedes returned to Formula 1, the only manufacturer that stuck doggedly with its national colours following the advent of sponsorship.

The actual red used deviated from Rosso Corsa for quite a while however, both because of the need to END_OF_DOCUMENT_TOKEN_TO_BE_REPLACED

Mimosa yellow must be one of the most distinctive paint names after whatever the heck it is Ferrari calls its red.

Over the last few weeks I went in search of yellow cars and, for the sake of completeness I’ve thrown the Tesla into the pile. None of these manage to be Mimosa yellow. That would have been very pleasing. From a safety point of view, a bright yellow car must be among the most visible against the widest range of backgrounds. Apart from that rather dull reason to prefer it, I find yellow a cheerful colour which to my eye, seems quite gender neutral whereas END_OF_DOCUMENT_TOKEN_TO_BE_REPLACED

Most cars are some kind of grey today, a fact we have mourned often here at DTW…

But every now and then, a manufacturer decides to market a model in what I call a ‘signature colour’ – one that is closely linked to a car model. Now this definition is somewhat fuzzy, and subjective, too. But as a hint, think of a colour the car was presented in on press photos, a colour that was only available for a single model, or a model / trim variant that was only available in a single colour. Rather than an in-depth essay, I’d like to present a small colourful gallery with some comments. END_OF_DOCUMENT_TOKEN_TO_BE_REPLACED

We haven’t quite got around to exploring this so much.

In mitigation, I’ll present the interesting colour combination of the Opel Agila “Njoy” special edition. Critics of my Opel bias can roll their eyes if they wish. However, in keeping an eye out for bright, distinctive colours while roving around Germany it’s been Opels (Corsas, Merivas, Astras) that have been most likely to have characterful paint jobs. END_OF_DOCUMENT_TOKEN_TO_BE_REPLACED

All Cars Are Grey In The Dark 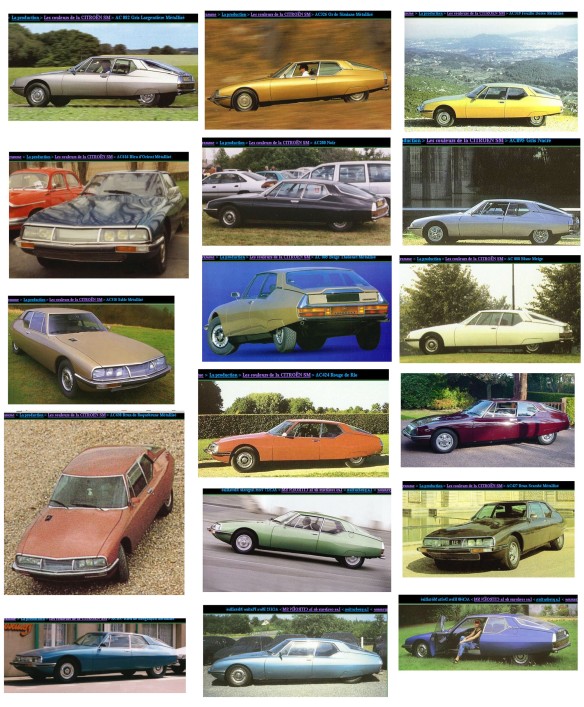 Colour. What a minefield that is! From your playground days, you might remember angry debates as to whether you had a right to nominate Green as your ‘favourite colour’. And, unlike many other childish foibles, the irrational and excessive reaction to colour doesn’t go away.

As you can see from the above collage provided to me by Sean Patrick, some people agonise over colour. Some years ago, the poor boy went to great lengths to decide which colour to respray his car though he tells me that he is still not sure he made the right choice. Personally speaking, I favour grey, which is not strictly a colour, or, if I must nominate actual colours, those shades used by the military. I am more liberal concerning the choices of others. Unfortunately, the motor industry is not. END_OF_DOCUMENT_TOKEN_TO_BE_REPLACED