We travel to Cortina – by Cortina. In a manner of speaking. 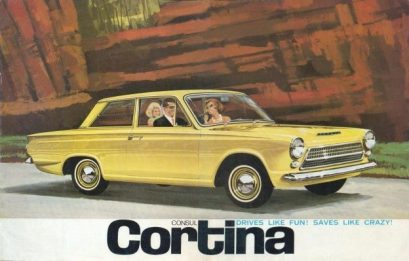 Back at a time when both the world and DTW was young, we had the time, imagination and intellectual bandwidth to employ a monthly theme, a literary device which would both inform the site’s content over the period in question and serve as something of a creative spur to the writers. And spur it did, garnering innumerable articles on subjects both diverse and arcane – many of which I would urge you to END_OF_DOCUMENT_TOKEN_TO_BE_REPLACED

“The middle frontier ahead!” Archie Vicar, the well-known motoring scribe, has a closer look at the 1981 Ford Cortina 2.0 GL.

This may be a verbatim transcript of an article which first appeared in Laker Airways in-flight magazine, July 1981. Original photos by Cosimo Villiers-Montreux. Due to the poor quality of the printed source, stock images have been used.

As sure as mustard, the market is happy to keep on buying front-engine, rear-drive cars in the middle range. With its assured sense of the market’s whims – and they are whimsical, ask Citroen! – Ford has made sure that the fifth in the Cortina series is a front-engine, rear-wheel drive car. It would seem that no matter how willing makers are to END_OF_DOCUMENT_TOKEN_TO_BE_REPLACED

…asks Paul Sanderson at the blog 5thcolour. He has a rather clever diagram of the profiles of eight saloon cars and asks us why they are so alike.

Paul Sanderson’s blog is worth a good look over and above this particular posting. I liked the article about the value of colour in branding and there are plenty more like that at his site. Since we are a broad church here, I am confident our readers will appreciate something from outside the narrow confines defined by four wheels.  END_OF_DOCUMENT_TOKEN_TO_BE_REPLACED