For power-hungry clients desiring a ‘maximum’ Tipo 116 GTV, the 2000 and later 2.5-litre GTV6 were, with the exception of the rare Autodelta turbocharged version, the limit. However, if you happened to live in South Africa, the USA or Germany, there were other exciting options, one of which also involved Autodelta. END_OF_DOCUMENT_TOKEN_TO_BE_REPLACED

79 to 75 million years ago (not that we’re counting), dinosaurs walked the Earth. Known as the Late Cretaceous period, one example to roam the area we now recognise as Canada was the Panoplosaurus or the “fully armoured lizard.” A herbivore growing to some seven metres in length; although vegetarian, that suit provided protection from the king himself, Tyrannosaurus Rex. A survivor of its time – akin to a car shown to the world, itself now a quinquagenarian.

1967, Montreal, Canada. The Universal Exposition is held over a six month period with millions of people witnessing the fruits of man’s labours alongside celebrating world nations days. In the pavilion named “Man The Producer,” the Expo’s stipulations called for the very pinnacle of automotive endeavour at that time. A request was made to END_OF_DOCUMENT_TOKEN_TO_BE_REPLACED

To try and understand what exactly went wrong with the proud Alfa Romeo brand over the past 15 years, there is no better example than this ItalDesign concept car.

Admittedly, there is a production car by the name of Alfa Romeo Brera, of which 21,661 units were built between 2005 and 2010 at Pininfarina’s Grugliasco factory. It even shares some visual traits with the 2002 concept car of the same name. But little of its character.

For the Brera, as originally envisaged by Giorgetto Giugiaro, was a genuine halo car. Which isn’t as far-fetched a proposal as it may appear at first, for Alfa had commissioned quite a few of these over the decades: From the outdated-yet-pretty 33 Stradale, over the charming-but-ill-conceived Montreal to the bold-for-boldness’-sake SZ. END_OF_DOCUMENT_TOKEN_TO_BE_REPLACED

A decade ago, Alfa Romeo wowed the faithful with the 8C Competizione, a car which ultimately amounted to less than the sum of its parts. But weren’t we here before?

The philosopher, Jorge Agustín Nicolás Ruiz de Santayana y Borrás once essayed the line, “those who cannot remember the past are condemned to repeat it.” Following this logic, amnesia clearly runs as deeply within Alfa Romeo as blind optimism. The perennially crisis-ridden Italian car brand seems locked into a habitual cycle of hope and despair, with each new dawn promising that this time all will END_OF_DOCUMENT_TOKEN_TO_BE_REPLACED 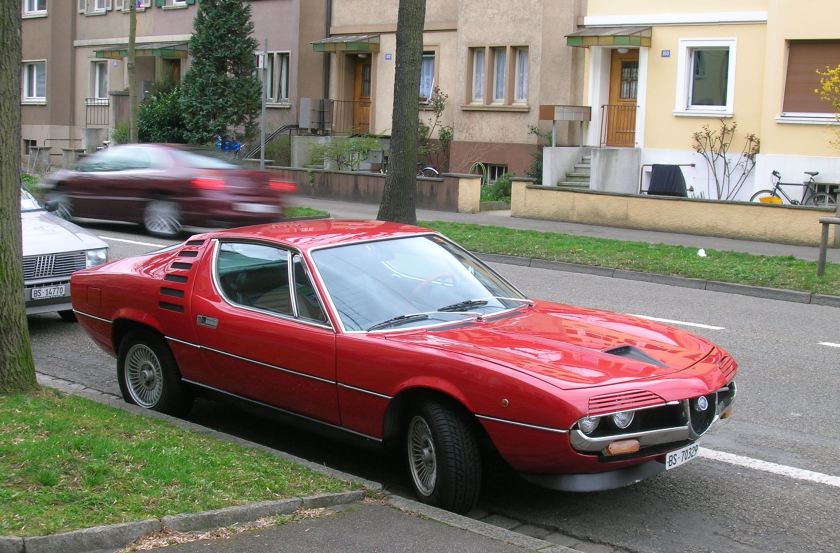 The 2600 duo in Friedrichstadt, the SZ in Dorridge, and the decaying Fadesa Romeo van on the road into Fornells spring immediately to mind.This Montreal was spotted on an unremarkable suburban street in Basel in March 2008. I imagine that the massive rise in classic car prices would make such encounters far less likely now. END_OF_DOCUMENT_TOKEN_TO_BE_REPLACED