Once ubiquitous on our roads, the 1979 Kadett D / Astra Mk1, GM Europe’s first front-wheel-drive car, is long forgotten and sadly overlooked, even here at DTW. Belatedly, we celebrate its 40th birthday.

There was considerable ballyhoo when Ford unveiled its first FWD Escort in September 1980. Few now remember that Opel actually beat Ford by a whole year in the switch to FWD for its C-Segment stalwart, the Kadett. Moreover, the Kadett D became the Vauxhall Astra in March 1980, replacing the geriatric Viva.

It was not the first badge-engineered Vauxhall with no sheet-metal differences to its Opel sibling. That dubious honour goes to the 1978 Royale saloon and coupé, better known as the Opel Senator and Monza. That said, the Astra Mk1 did mark the end of Vauxhall’s design and engineering independence from its German cousin. In future all GM Europe siblings would END_OF_DOCUMENT_TOKEN_TO_BE_REPLACED

“Horror and moral terror are your friends. If they are not, then they are enemies to be feared”.

Dystopian paranoia and reactionary politics were the order of play as this turbulent decade faded out. Having become inured to kidnappings, airline hijackings and low-level terrorism, 1979 witnessed the Islamic revolution in Iran, the Russian invasion of Afghanistan, and the ascent to power of Iraq’s Saddam Hussein. In Britain, Margaret Thatcher led the Conservative Party to power, proving Britain could END_OF_DOCUMENT_TOKEN_TO_BE_REPLACED

Among the cars that turn 40 this year, there is the most misunderstood and underappreciated Alfa Romeo ever: the Alfa 6. It’s about time to set the record straight on Arese’s failed ammiraglia.

Presented to the international press on the shores of Lake Como in the spring of 1979, the Alfa Romeo Alfa 6 (that is its actual name) has been mostly forgotten by everyone bar the most hardened Alfisti. That shouldn’t come as a surprise, given that in period the Alfa 6 was mostly ignored by its target market.

Alfa Romeo planned to sell 10,000 Alfa 6 models each year, of which 7000 were expected to be absorbed by the Italian market. However, the company eventually managed only to sell 12,000 over an entire production span of seven years! END_OF_DOCUMENT_TOKEN_TO_BE_REPLACED

The relative conventionality of the Delta dismayed marque aficionados in 1979, but it would go on to embody marque values of both performance and commercial longevity far beyond its seemly narrow remit.

The old guard was falling away. After a decade on sale, Lancia’s entry level Fulvia Berlina ceased production in 1973. The patrician compact saloon had proven a modest commercial success in its native Italy over that period, appealing to those who had both the means and the discernment to appreciate a such a finely wrought and technically noteworthy vehicle.

But while its mechanical specification left little to be desired, the level of complexity it incorporated would not square with that of Lancia’s new owners, who were masters of cost-control. Furthermore, its uncompromisingly rectilinear three-volume style had become widely viewed as outdated.

The last traditional Peugeot saloon marks its 40th anniversary this year. We look back at the 505.

The final flowering of a fine tradition, the 1979 Peugeot 505 marked the last generation of rear-wheel drive saloons to emerge from Sochaux. A late ’70s update of the popular and durable 504 model, the 505 cleaved so closely to its predecessor’s conceptual template those of a more cynical mien could scarcely END_OF_DOCUMENT_TOKEN_TO_BE_REPLACED

Concluding our profile of the Series III.

It can be stated without a trace of hyperbole that the Series III XJ remains the most commercially significant Jaguar of all time. Not the most successful, mark you; other XJ generations have sold in greater numbers, others still to come may yet again transform its fortunes, but the Series III remains to this day the car that single-handedly saved the company.

Ironic of course, given that it should never have come into being, and had BLMC’s Lords and masters given Browns Lane the creative freedom and the finances to END_OF_DOCUMENT_TOKEN_TO_BE_REPLACED

Some words from the gentlemen of the (mostly) UK press.

With Series III a reality, if a somewhat limited one, the UK automotive press wasted little time getting to grips with a series of well-prepared press cars. Car magazine’s Mel Nichols was let loose in an XJ12 in March ’79, observing, “[T]he Jaguar is so controlled, so full of poise… It didn’t take too many miles on winding country roads to convince me all over again that nothing offers such ride comfort with such dynamic ability.”

Later that year, coinciding with the introduction of Mercedes-Benz’s sector-defining W126 S-Class, Nichols ranged another XJ12 from Jaguar’s press fleet against the overwhelming superiority of Stuttgart-Untertürkheim’s flagship. No rational person on earth would END_OF_DOCUMENT_TOKEN_TO_BE_REPLACED

“Unreliable and unjustifiable, its cars had become a laughing stock, its management a comedy and its accounts a tragedy. Only when it began to take itself very seriously indeed, to cultivate the quality it had previously scorned did things change…” (LJK Setright – Car 1986)

It has been retrospectively stated that the Egan-led quality drive was more illusory than real, which is perhaps a little unfair to the huge effort from all concerned. There was however, in Egan parlance, perhaps a little more sizzle than steak to it. Nevertheless, the reforms had a basis in fact and if the JD Power statistics were any guide, it’s evident that Jaguar made significant strides in this area.

In 1983, BMW’s Eberhard von Kuenheim toured the Browns Lane facility. What he made of it is undocumented, but he must have been, to say the least, given to END_OF_DOCUMENT_TOKEN_TO_BE_REPLACED 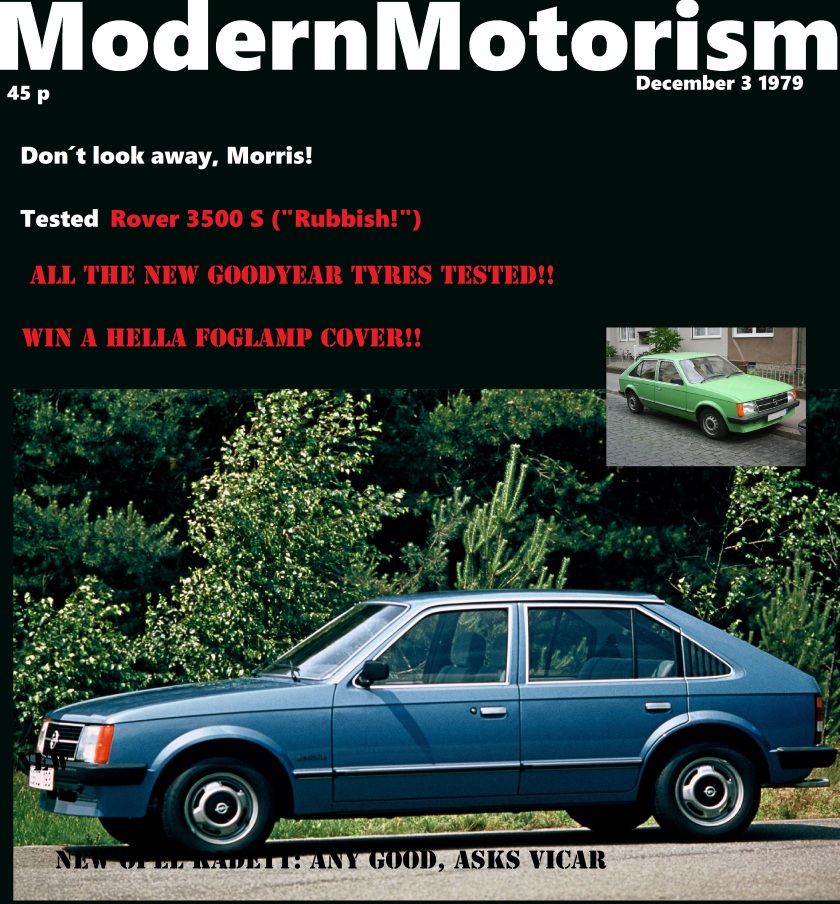 This article first appeared in Modern Motorism Magazine, December 3 1979. Due to the poor quality of the the copied images, stock pictures have been used. The original photos were by Douglas Lan-Dwinderere (sic).

Pity the poor chaps at Vauxhall! Not just generally, mind, for their lot is not a happy one, but in particular since Opel have decided to END_OF_DOCUMENT_TOKEN_TO_BE_REPLACED

“We had a modern, world-class car before. All we had to do was to improve quality and reliability.” (John Egan – 1982).

It was dubbed ‘The Egan miracle’. The turnaround which saw Jaguar go from loss-making irrelevance (in the region of £20 million in 1979), ripe for closure, to media darling and example to all of how failing businesses could be transformed by effective management.

And Egan was effective. Aided by a store of goodwill that existed for the marque within the broader automotive industry, amid the car-buying public, from the workforce itself and within certain quarters of the unwieldy BL leviathan, the ambitious Lancastrian came with proven managerial qualities, enthusiasm and a burning drive to END_OF_DOCUMENT_TOKEN_TO_BE_REPLACED

The Castle Bromwich paint debacle crystallised the manner in which the relationship between Jaguar and its adoptive parent broke down in the years following its absorption into British Leyland; one characterised by unwarranted interference and lack of meaningful communication on one hand and distrust, insubordination and outright defiance on the other.

The roots of this go back to the creation of the car giant in 1968 – a piece of well-meaning, government-led commercial engineering. Much like a certain latterday piece of political engineering currently paralysing Britain’s political establishment, the BLMC experiment was undeliverable, but more fundamentally still, should probably never have been attempted in the first place. END_OF_DOCUMENT_TOKEN_TO_BE_REPLACED

The Triumph TR7 Convertible embodied the BL charter in microcosm.

“If only this could have been the TR7 that was launched five years ago instead of the poorly-assembled and inadequately developed Speke-built versions that so quickly acquired a tarnished reputation.” [Howard Walker, Motor – August 30 1980.]

If only. Those two simple words perhaps most poignantly encapsulate the British Leyland charter. Because amid the egos, the politics, the industrial strife and lost hopes chiselled onto BL’s cenotaph, there were also well-conceived, rational motor cars which deserved a better fate. END_OF_DOCUMENT_TOKEN_TO_BE_REPLACED 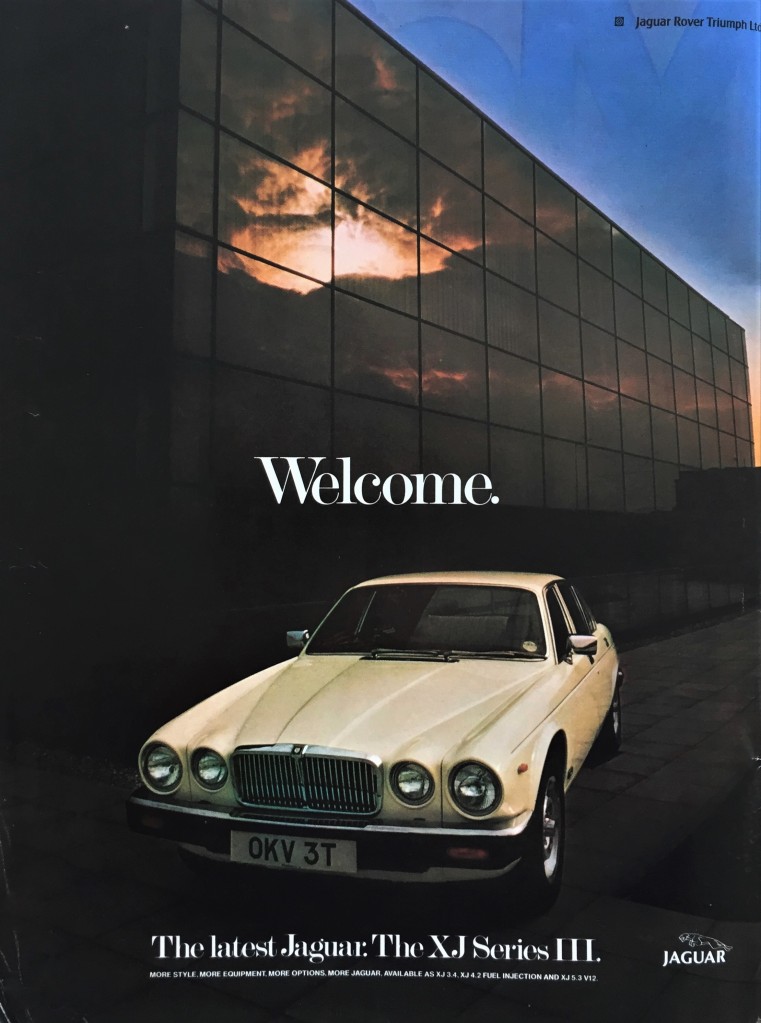 What would become the epicentre of Series III’s existential maladies lay North West of Browns Lane, opposite the Grade A listed Fort Dunlop tyre factory in the district of Erdington, on the outskirts of Birmingham. The Castle Bromwich facility, built by William Morris, was completed in 1940 as a wartime shadow factory for large-scale manufacture of Spitfire fighter aircraft. Over half of the total compliment of Spitfires flown were constructed there.

Post-War, it was purchased by Pressed Steel Fisher as a ‘jobbing shop’ producing bodies in white (unpainted shells) to highly variable standards for a number of domestic manufacturers, Jaguar included. It was entirely reasonable for BL to END_OF_DOCUMENT_TOKEN_TO_BE_REPLACED

Series III’s advent coincided with a number of technical innovations, but one in particular would come with a side-order of calamity.

Despite the outwardly positive manner in which the Series III was presented to the motor press, there was no getting away from the political environment under which the car was developed. Jaguar was reeling under the dictates of the infamous Ryder Report, a series of post-nationalisation recommendations which as implemented, stripped Browns Lane of its leadership, its identity and ultimately its ability to END_OF_DOCUMENT_TOKEN_TO_BE_REPLACED

Frequently exercises in diminishing returns, facelifts tend to fall into the category of change for changes sake, or perhaps a last ditch effort to breathe life into a fading model line. Rare indeed is one which successfully transcends its originator. But if the original XJ saloon’s body styling was the inevitable culmination of a lifetime’s study by a master auteur, the Series III of 1979 proved by comparison to be something of a fortuitous accident.

In 1973 Jaguar introduced the second-series XJ, a modest revision of a highly successful model line – for at the time, no more was required. By then, work had already begun upon its ultimate replacement – the troubled XJ40 programme, then scheduled for release in Autumn 1977.