There is little question that successive generations of Mercedes-Benz SL would never have come into being without the patronage of the more affluent and socially aspirant United States car buyer. After all, there simply wasn’t a sufficient market for such wilfully indulgent fare in the old world – nor available spaces one imagines on the car-train to Sylt. Also beyond doubt is that by the close of the 1980s, the SL had become the automotive marker of choice for those who really wished to END_OF_DOCUMENT_TOKEN_TO_BE_REPLACED

Formed in Athens Georgia in 1976, the US alt-surf-rock band The B52s had existed relatively contentedly on the peripheries of the contemporary music scene for a good decade and a half before a single taken from their 1989 album, Cosmic Thing propelled them into mainstream international chart success, and an element of immortality.

Written partly to recall their early years as impecunious art-loving musicians, and to honour their guitarist Ricky Wilson who had died in 1986 from a HIV-related illness, Love Shack was not so much the B52s shifting their retro-futurist sound and aesthetic to END_OF_DOCUMENT_TOKEN_TO_BE_REPLACED

In 1989, Toyota shot for the moon. Cars will never be made like this again.

“We choose to go to the moon in this decade, and do these other things, not because they are easy, but because they are hard.” These are the much quoted words of President John Fitzgerald Kennedy in 1962, pledging his country’s commitment for the Apollo space mission.

The Apollo programme cost $billions and was only a qualified success, insofar as it did not precipitate a more widespread and far-reaching programme of space exploration. It did however succeed in demonstrating what the American government could do when the finest minds were provided with almost unlimited resources to END_OF_DOCUMENT_TOKEN_TO_BE_REPLACED

The 1989 Dedra brought Latin style and a more competent package to the compact executive segment. Sadly, it left behind a few more pressing concerns.

Italians have never needed to be convinced that a luxury car could also be a compact car. With a land and cityscape which militated against corpulence and a taxation system which proscribed large-capacity engines, Italian carmakers made something of an art out of geographical and fiscal necessity.

As artforms went however, it wasn’t the most expressive, the post-war Italian upmarket berlina conforming to a degree of visual rectitude that was almost flamboyant in its subtlety. Foremost amongst its exponents was Lancia. From the Ardea, its Appia successor, to the seminal Fulvia, these saloons gave the upwardly mobile a refined, well engineered and reassuringly patrician vehicle – one which could END_OF_DOCUMENT_TOKEN_TO_BE_REPLACED

In the second part, we examine R8’s mid-career and consider the heart of the matter – the all-new K-Series power unit. 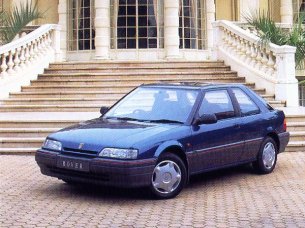 30 Years ago this week, the Rover Group launched perhaps its best realised product. We look back at the R8, née Rover 200-Series.

In the late 1980s it really did seem that at last Rover Group had finally found its place.  Much of the credit was due to their new Japanese friends, but the rump of British Leyland was at last demonstrating a new found competence and confidence. However, agony would eventually follow the ecstasy of these heady days.

On 11 October 1989 Rover Group presented, with justifiable pride, the second-generation Rover 200 series, and with it the eagerly anticipated and all-new K-series engine. Every new Rover of the era had an equal and opposite Honda, and the 200’s was the Concerto, which had gone on sale in Japan in June 1998, only 16 months after Rover and Honda had signed the contract to build Project YY as a joint venture. END_OF_DOCUMENT_TOKEN_TO_BE_REPLACED

Thirty years ago, in the hope of reviving their ailing business, Land Rover introduced the Discovery at the 1989 Frankfurt motor show, inspired (in part) by the vehicle that had made their name, but aimed at a very different customer. Three decades later, facing an even more precipitous climb, they appear to be doing something broadly similar, this time however, based squarely upon the original.

The eternal Defender, in production in various forms since 1948 had become a very dated proposition by the close of the 1980s. Starved of meaningful investment throughout the previous troubled decade, the Land Rover’s best days were well past. The global market it once enjoyed was being eaten alive by more modern, better developed and more reliable Japanese rivals and with BL’s apathy being equal to its empty coffers, the outlook seemed as stark as a contemporary Landie’s cabin. END_OF_DOCUMENT_TOKEN_TO_BE_REPLACED