December is generally a quiet time of the year for most carmakers, but that doesn’t necessarily mean that it’s all tumbling weeds within the automotive universe. But rather than highlight any one aspect, let us take this opportunity to END_OF_DOCUMENT_TOKEN_TO_BE_REPLACED

As 2018 leaches away, we begin our annual run-down of cars we couldn’t write about this year, beginning with 2008.

The largest machine ever built, the Large Hadron Collider at CERN was created with the modest aim of testing particle physics theory and possibly uncovering the secrets of existence itself. Situated 175 meters underground, with a circumference of 17 miles, the LHC was completed and inaugurated ten years ago. And while some critics expressed concern that it would END_OF_DOCUMENT_TOKEN_TO_BE_REPLACED

The main thrust of this little meditation rests on a sighting of the brightwork on a VW Troc.

Alas, my camera did not lie within easy reach so I have to use a library photo. I can confirm, however that the car had the same paint coat as the one in the image you can see above.

The thought process lasted under a minute. My eventual conclusion is to wonder if I am some kind of relativist. Am I?

END_OF_DOCUMENT_TOKEN_TO_BE_REPLACED

According to Automotive News Europe, Opel will reduce the number of models it sells. You won’t be surprised, will you?

Additionally, purchasing activities will be shared alongside PSA platforms. The Ruesselsheim design and engineering centre will be charged with electrification of PSA vehicles and, finally, Opel will expand into territories that were previously taboo under GM.

The first point can be taken to mean more vehicles like the Crossland which already uses a shared platform with PSA. The bundled purchasing operation probably translates into more parts commonality among which will be engines or eventually electric power trains. Engines are typically a clear generator of brand character (or lack thereof); add characterless electric and hybrid powertrains to the mix and one can see a growing hazard for PSA in meaningless differentiation.

This leads us to the last point: new markets for Opel. Currently Opel is stranded in Europe although some of its output found customers in the US as Buicks (the Insignia, the Cascada and the previous Astra.) So, where will Opel head to now it can compete against GM? North America has been a hard market for PSA to crack. One scenario sees Opel as a “German” brand for PSA to push in the US, as a kind of wolf´s clothing for PSA’s platform sheep. Possible models (or their successors) would be the Astra and Crossland cars. In another scenario, Opel might END_OF_DOCUMENT_TOKEN_TO_BE_REPLACED

This vehicle hid in the backlot of an Opel dealer near me. 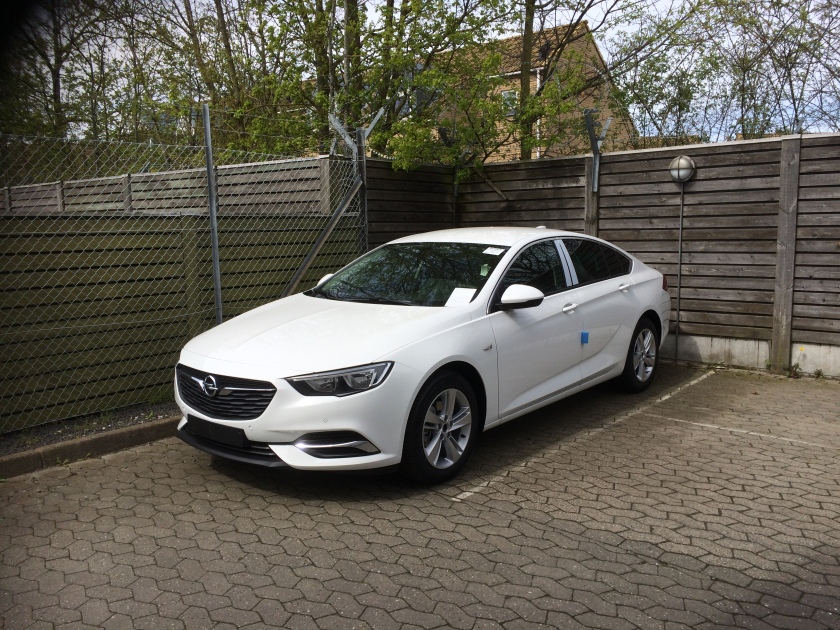 It would have been difficult to take many photos without attracting attention so this is all I have. It must be among the very first of the new Insignias in Denmark. What do I think?

END_OF_DOCUMENT_TOKEN_TO_BE_REPLACED

General Motors – the name is a clue – are virtuosos in the art of the world car. This is not to say they haven’t played a few bum notes in their time.

It’s too early to speculate how the Opel Insignia B will perform on its world tour, but its diverse audiences will demand versatility as well as capability. Launched proudly earlier this year in Switzerland, the Insigregaldore carries four badges; a lightning bolt, a mythical beast which appears to be self-conscious about underarm odour, three shields, and from February 2018, a lion. END_OF_DOCUMENT_TOKEN_TO_BE_REPLACED

This has to conclude my Opel binge. It’s a thematic collation of AutoExpress, Autocar and Car‘s reviews of the new Insignia.

The reviews have been chopped up and organised under a few headings. They aren’t consistent as they seem to have all based their views on different versions of the car.

Read on to get the digest of the reviews…

END_OF_DOCUMENT_TOKEN_TO_BE_REPLACED

“It would appear that emissions, efficiency and cost are driving the V6 over a cliff. I would not wager a whole lot of money that Opel will still offer a V6 when the Insignia is replaced.” We got that one right. Opel revealed the 2017 Insignia-replacement the other day and we find that “the engine range is made up exclusively of turbocharged four-cylinder units and is crowned by a 247bhp 2.0-litre engine”. (Autocar)

This is somewhat odd END_OF_DOCUMENT_TOKEN_TO_BE_REPLACED

MPVs are so ’00s. Opel have announced the name of their new small CUV, the Crosslander which replaces the Meriva. Autocar said so too. As did BBC’s Top [Insert Name of Presenter here]

Opel used lot of design talent on the Meriva. It had a superb interior with some excellent colour and fabric options. The window line was unique in that it recognised the fact the kids in the back might want to see out. That’s user-centred design which I can only applaud. Those doors too. END_OF_DOCUMENT_TOKEN_TO_BE_REPLACED

As the brakes come off a troubled mainstream European car market, Ford and General Motors jealously guard market share, but at what cost?

The post crunch era has been tough for America’s European automotive outposts. Of the pair, Ford appears in better shape, having already taken painful steps to arrest serious overcapacity in their European operations by shutting loss-making plants. The closure of the Genk plant only partially explains why the US Fusion took so long to become the European Mondeo. Last year, we suggested END_OF_DOCUMENT_TOKEN_TO_BE_REPLACED

The Passat is very much das auto in the European D-segment. We look at how everyone else is doing.

With the strongest sales of all of the major European producers, German manufacturers remain hugely successful in the mainstream D-segment. Today, we delve below the surface to see if the figures tell the full story.
END_OF_DOCUMENT_TOKEN_TO_BE_REPLACED