(almost) Always a bad idea, when you’re in the automotive business.

Driven by opportunism, expediency or sheer desperation, motor manufacturers have often tried to pass off lightly reworked versions of competitors’ products as their own. It has rarely ended well.

The latest to have tried and failed at this game is Fiat, who announced in late 2019 that production of the Fiat 124 Spider for European markets was ending after just three years. There appears to be some confusion regarding the North American market, where the model is still listed on the Fiat.com website, but it is widely believed to be on its way out. Speaking to Autocar in August 2019, Fiat CEO Olivier François claimed that Fiat had “no legitimacy” in this segment, from which Autocar inferred that the 124 Spider would not END_OF_DOCUMENT_TOKEN_TO_BE_REPLACED

Like so many ill-considered marriages, GM’s entanglement with Saab was destined to end badly.  We conclude the story of this unhappy union.

Having taken full ownership of Saab Automobile AB in 2000, GM was free to continue its planned transformation of the company into a premium competitor to Audi, BMW and Mercedes-Benz. The existing 9-3 was looking dated, appearing little different to the New Generation 900 launched in 1994, and its five-door format was out of step with its intended competitors, the A4, 3 Series and C-Class.

A new 9-3 was developed in parallel with the Opel Vectra C, based on the new GM Epsilon platform. Both cars were launched at the Geneva Motor Show in March 2002. The 9-3 adopted a four-door Sport Saloon format. A convertible followed in 2004 but the arguably more important SportWagon estate didn’t END_OF_DOCUMENT_TOKEN_TO_BE_REPLACED

We are still rifling through the footnotes of 1998 and now the examination has produced the Saab 9-3.

Saloon or hatchback? Which is it? Why?

From 1972 to 1984 the VW sold the Passat with the option of a 5-door as well as 2-door and five doors. Today it’s only sold as a saloon and estate. The Citroen XM came as a five-door hatchback and as a fabulously useful estate. Its predecessors and successors could only be had as saloons or estates.

All generations of the Seat Toledo, barring one have been hatchbacks. For 1999, the second generation Toledo astounded the world with its saloon format (except in Britain where it was a hatchback**). By 2004 the status quo ante resumed and remains so.

In the 1970s quite a few manufacturers experimented with the 5-door format but reverted by the early 80s. We know this. Don’t END_OF_DOCUMENT_TOKEN_TO_BE_REPLACED

The public lost interest in these cars: inexpensive coupes.

The flame flickered out between 1999 and 2006 for the seventh generation Celica. It had one engine in two states of tune and this terrible A-pillar. END_OF_DOCUMENT_TOKEN_TO_BE_REPLACED

It’s been a while since we reported on NEVS. How goes it in the netherworld?

Recently, National Electric Vehicle Sweden AB (NEVS) released official images of the ‘forthcoming’ 9-3 and 9-3X EV’s based on the decade-old former Saab bodyshell. These images, shown on SAABSunited.com appear to show both models in production specification, demonstrating if little else, that hope really does spring eternal.

My intention was to END_OF_DOCUMENT_TOKEN_TO_BE_REPLACED

A recent tour in the country between Gothenburg and Trollhättan, reminded me how much Sweden there is the NE of the US but also how easily American cars sit in the Swedish landscape.

DTW Goes Back In Time

Seitz Automobiles in the Schwarzwald have this year 2000 Saab 9-3 2.0i Turbo SE for sale at €12,990. A high price you may think, but it has only covered 11,800 km. The 9-3 has proven to be an unexpected pleasure for one DTW member but, like me, they might be ambivalent to this timewarp example. END_OF_DOCUMENT_TOKEN_TO_BE_REPLACED

Driven To Write has some news for anyone who has been reading the UK motoring press. 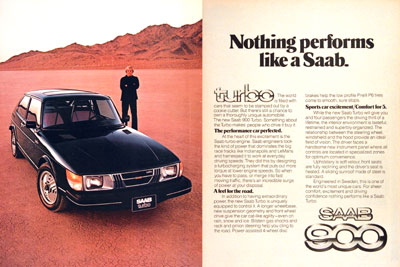 Far from being “an undiscovered bourne from whom no traveller returns” (copyright W. Shakespeare 1599-1602), it appears death is a place car brands can pop over to and come back from much like an obscure place with an out-of-the-way airport served by Ryanair. I think Saab is dead but it might not be. Or it might be. It died spiritually under GM, it died again physically, was reborn under Spyker but soon expired. National Electric Vehicles revived the firm in 2012.